Starring Tom Cruise as a reluctant soldier who teams up with a hardened Emily Blunt, Doug Liman's Edge of Tomorrow remains an edge-of-your-seat sci-fi actioner that effectively uses the time-loop premise to its advantage. The movie storms the shores of Ultra HD with a beautiful 4K presentation and a fantastic Dolby Atmos track, offering a noteworthy upgrade over its Blu-ray predecessor although the bass will leave some wanting a bit more. Overall, this UHD edition makes for an awesome, Highly-Recommended addition to the 4K library.

One of my favorite aspects of Doug Liman's Edge of Tomorrow is its opening sequence where The Bourne Identity director drops a massive exposition dump without ever feeling like an excess of tactless explanation. Adapted from the 2004 Japanese novel by Hiroshi Sakurazaka, Christopher McQuarrie's script delivers the necessary background information via random news footage while seamlessly introducing our two central protagonists. The entire beginning is as terrifically inventive as it is visually engaging with the audience effortlessly learning all that is required about the invasion and the rise of a hardened, undaunted hero in Sgt. Rita Vrataski (an awesome badass Emily Blunt). More importantly, the frantically-edited montage effectively throws audiences into the fray, immediately establishing the pace and proper frame of mind for this sci-fi berzerker, making excellent use of the time-loop premise into a memorable action spectacular.

At the same time, we are also introduced to Major William Cage (Tom Cruise) doing the rounds with various media outlets, as though selling the war like a press junket. In throwing us into the middle of the story with little snippets of Cruise's Cage already in promo mode, it allows the A-list actor to just do his smug but charming shtick he is famous for, and Cruise's go-to act works to the plot's benefit. It surprisingly adds a character arc that was unexpected during my first watch, but with each repeated visit, it is impressive to see how it continuously pays off throughout the course of the story. It also makes Cage's training montage all the funnier because, with each comical failure, we witness his growth and start rooting for him, not only to succeed in destroying the Omega, the Alpha and the Mimics but also to learn some altruistic humility. For me, it makes the ending of Edge of Tomorrow all the more powerful and satisfying. 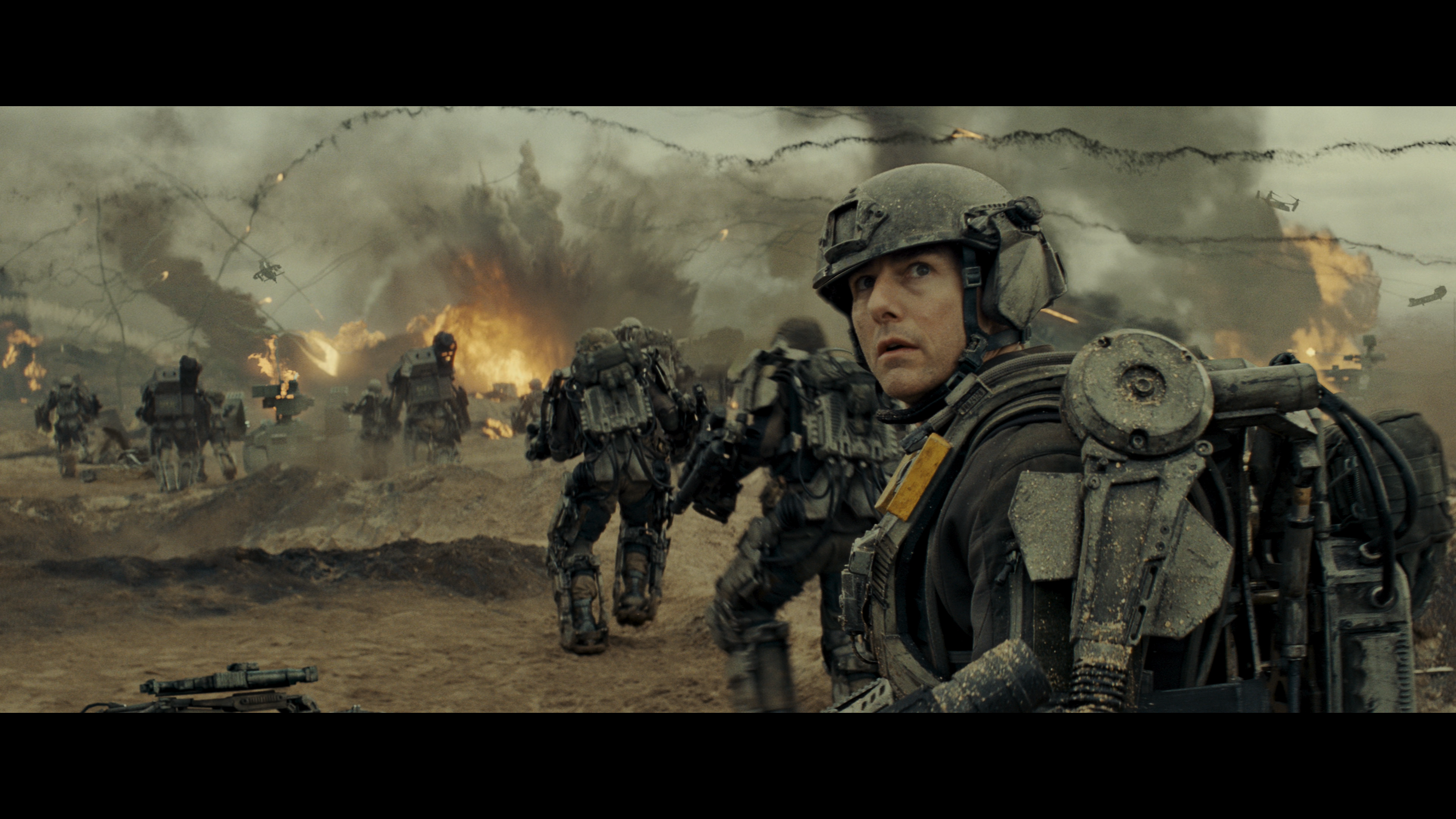 For a more in-depth take on the film, check out our review of the 2014 Blu-ray HERE.

Warner Home Video brings Doug Liman's Edge of Tomorrow to Ultra HD Blu-ray as a two-disc combo pack with a Digital Copy code. When redeeming said code via MoviesAnywhere, users are granted access to the 4K UHD digital version in Dolby Vision with Dolby Atmos audio. The triple-layered UHD100 disc sits comfortably opposite a Region Free, BD50 copy containing supplements. Both are housed in a black, eco-cutout case with a glossy slipcover. At startup, the disc goes straight to a static main menu screen with the usual options along the bottom and music playing in the background.

The sci-fi actioner storms the shores of Ultra HD with an awesome-looking HEVC H.265 encode that appears to have been struck from the 2K digital intermediate. The upscaled transfer enjoys a welcomed uptick over its Blu-ray predecessor, showing better details and lines in the exoskeleton suits and in the individual Mimics. However, there are a few instances of very mild aliasing along the sharpest edges of several objects, such as Cage's name badge during his first meeting with General Brigham and along the roofs of caravans later on. Aside from that, the 2160p picture is overall stable with excellent definition and clarity even in the craziest action sequences, awash in a very fine layer of natural grain, supplying the 2.39:1 image with a lovely film-like quality. 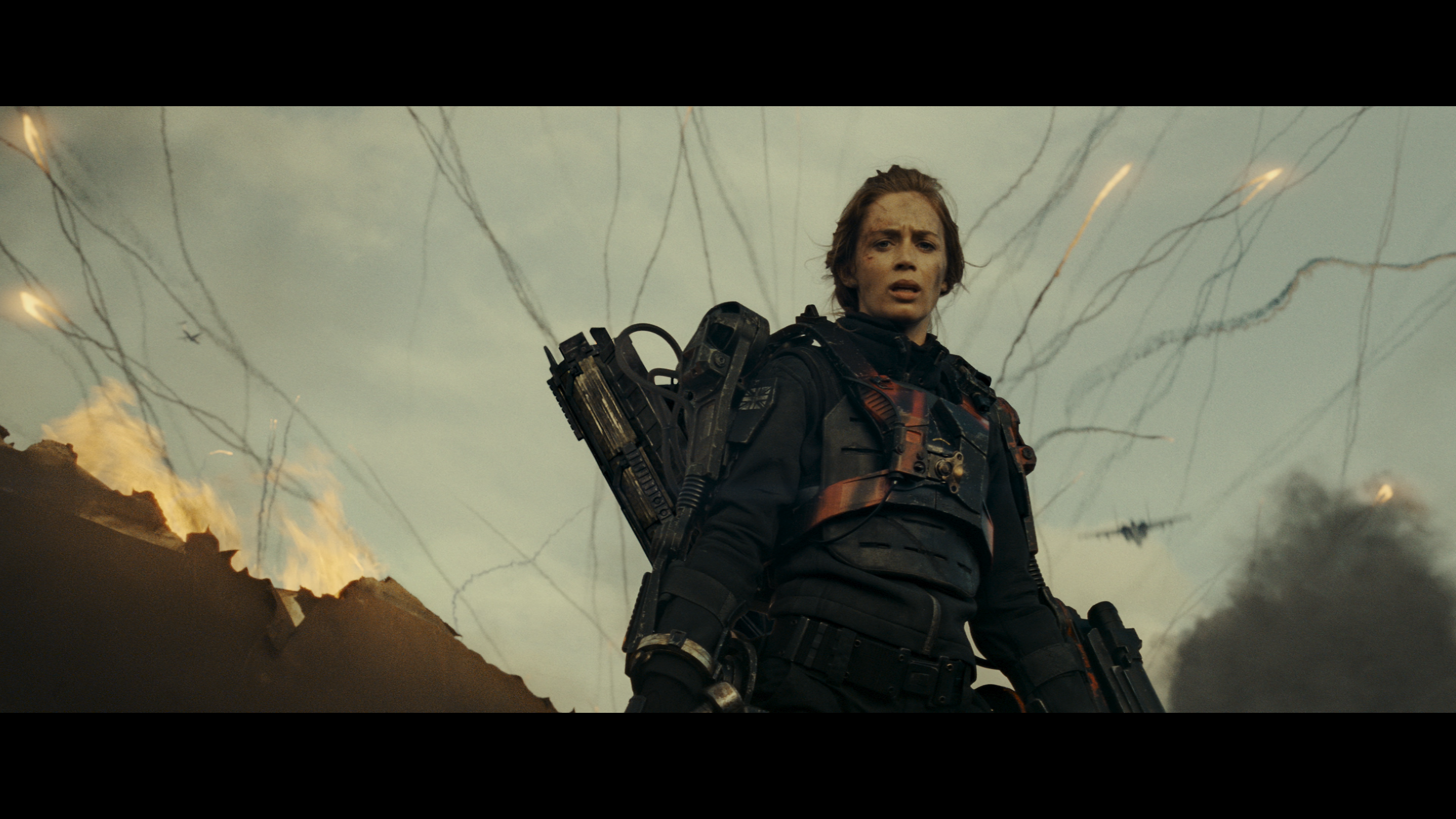 The stylized cinematography also benefits from a pleasing boost in the contrast and brightness balance although whites remain relatively controlled and subdued, providing the visuals with a deliberate somber and overcast appeal, but they are nonetheless clean and crisp throughout. Specular highlights offer a more noteworthy improvement, furnishing the explosive action with a tighter, more revealing bloom and a snappy, lifelike polish on metallic surfaces while the eerie glow of the Mimics is narrower to expose some of the finer aspects of their bodies. Blacks are slightly richer and inkier but oddly look somewhat digital in some areas and edging towards crushing in the last quarter of the movie during the climactic battle at the Louvre, yet shadow details maintain decent enough visibility.

The better and arguably strongest improvement in this 4K HDR10 presentation is a more vibrant color palette, supplying a sumptuous array of primaries, particularly more energetic blues and deep, animated reds. Likewise, secondary hues are more full-bodied with a spirited selection of earth tones and tans while the warmer yellows and deep, fiery oranges make for an eye-catching spectacle. Facial complexions appear more natural and accurate with a realistic peachy-rose tone in the entire cast and revealing, lifelike textures, making for a fantastic upgrade over its HD SDR counterpart. (HDR10 Video Rating: 90/100) 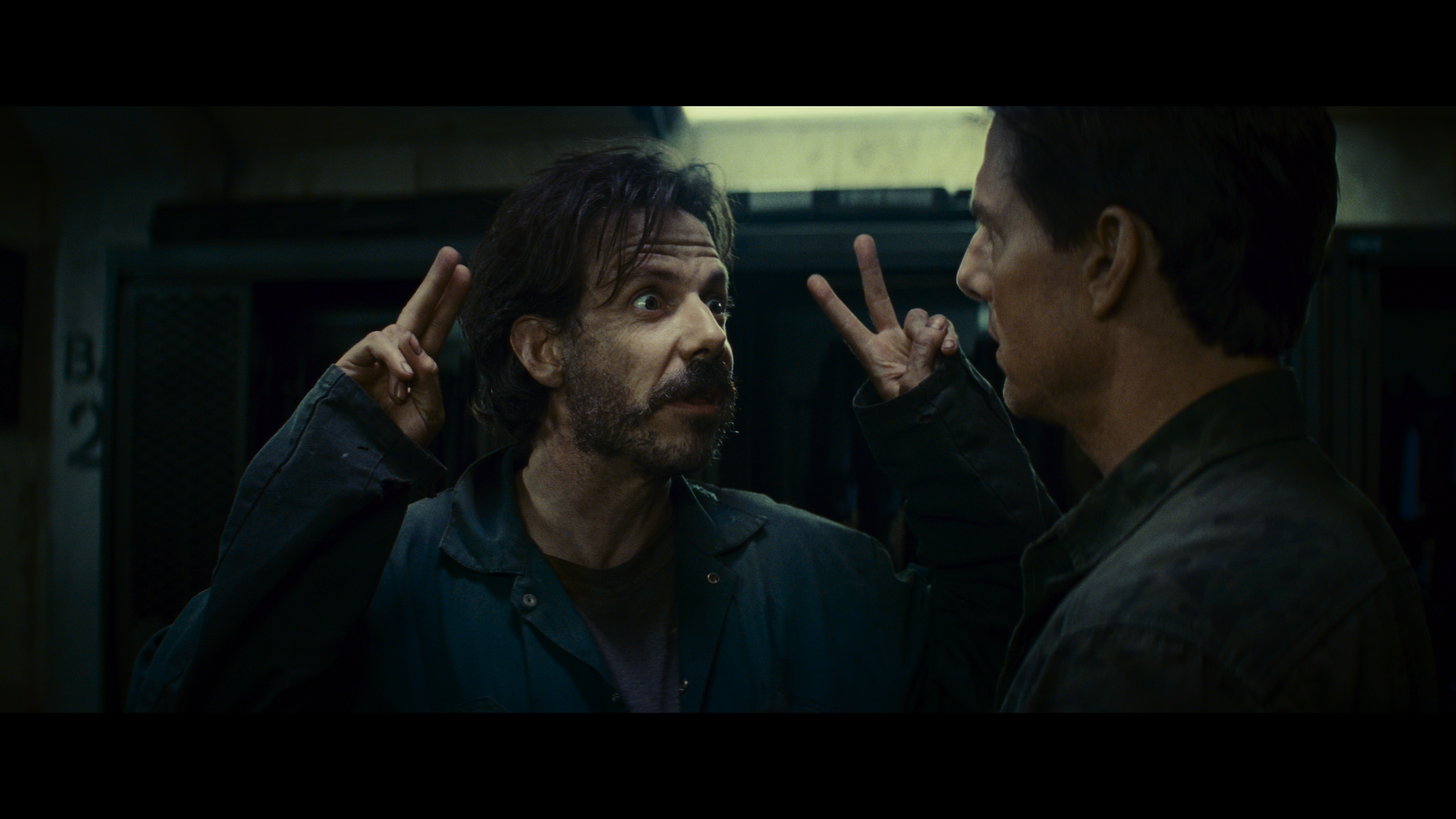 The invasion crash lands into home theaters with a spectacularly awesome Dolby Atmos soundtrack that quickly fills the room with the absolute pandemonium of war. As would be expected, the beach siege is splendidly layered with a variety of noise bombarding the listener from every direction. Whether it is the Quad Tiltrotors flying everywhere, debris raining down from above or the chaos swarming through the surrounds, various sounds effortlessly and convincingly pan from the seven-channel layer into the top heights to generate a fantastically immersive hemispheric soundfield. Even quieter, more dialogue-driven moments sustain the 3D envelopment with subtle yet audible ambient effects circling all around and moving overhead.

Imaging maintains an amazingly wide and expansive sense of presence with outstanding channel balance and movement into the top heights, creating a terrifically engaging half-dome soundstage from start to finish. The mid-range exhibits superb clarity and definition into the higher frequencies without a hint of distortion, allowing the listener to fully appreciate every chaotic detail during battle while Christophe Beck's score enjoys impressive fidelity in the orchestration. All the while, dialogue remains very well-prioritized and precise amid the racket.

Sadly, in spite of how incredibly amazing this object-based mix is, there is one area where it sorely drops the ball when compared to its DTS-HD Master Audio counterpart. And that is the bass . . . because it's all about that bass. To be fair, the low-end on this 3D track is plenty powerful at providing the visuals with some wall-rattling, couch-shaking oomph, particularly during the beach siege and the attack at the Louvre. However, the bigger disappointment comes at the opening sequence when the pulsating radio frequency, which made the Blu-ray a reference disc for the DIY bassheads because it drops down to 10Hz at loud decibels (bass chart), was suddenly missing on this UHD edition. Much like they did with War of the Worlds, a high-pass filter has been applied to the mix, maddeningly cutting off the low-end at 30Hz (bass chart) for the entirety of the movie.

For the B&M, name-brand subwoofers, there is still much to enjoy since most of the energy has been refocused to the mid-bass range, but for those capable subs looking for a more significant workout, this track is comparatively a tad of a letdown, albeit only slightly. (Dolby Atmos Audio Rating: 94/100) 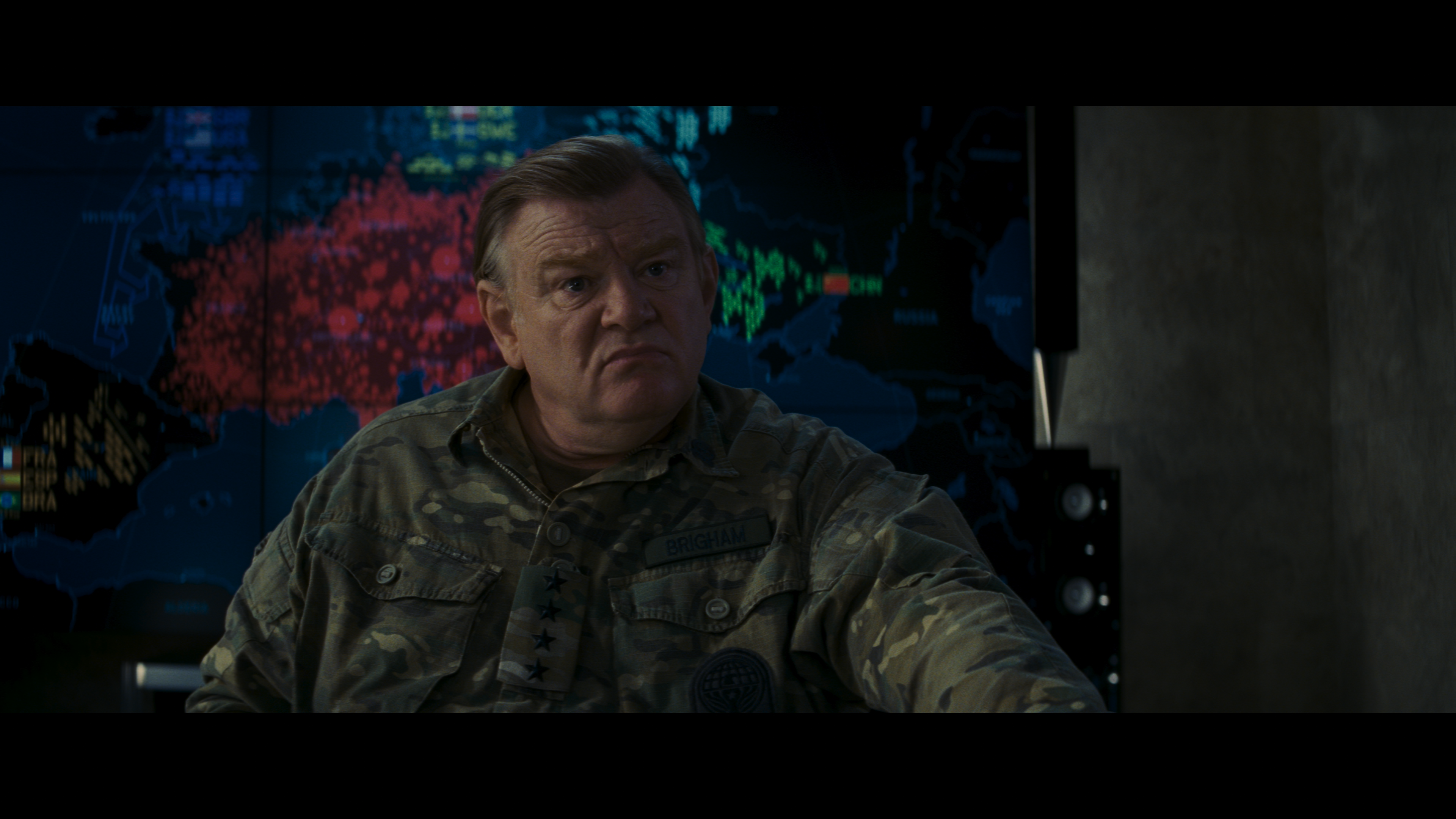 For this UHD edition, the same set of bonuses has been ported over, but they are only available on the accompanying Blu-ray disc. 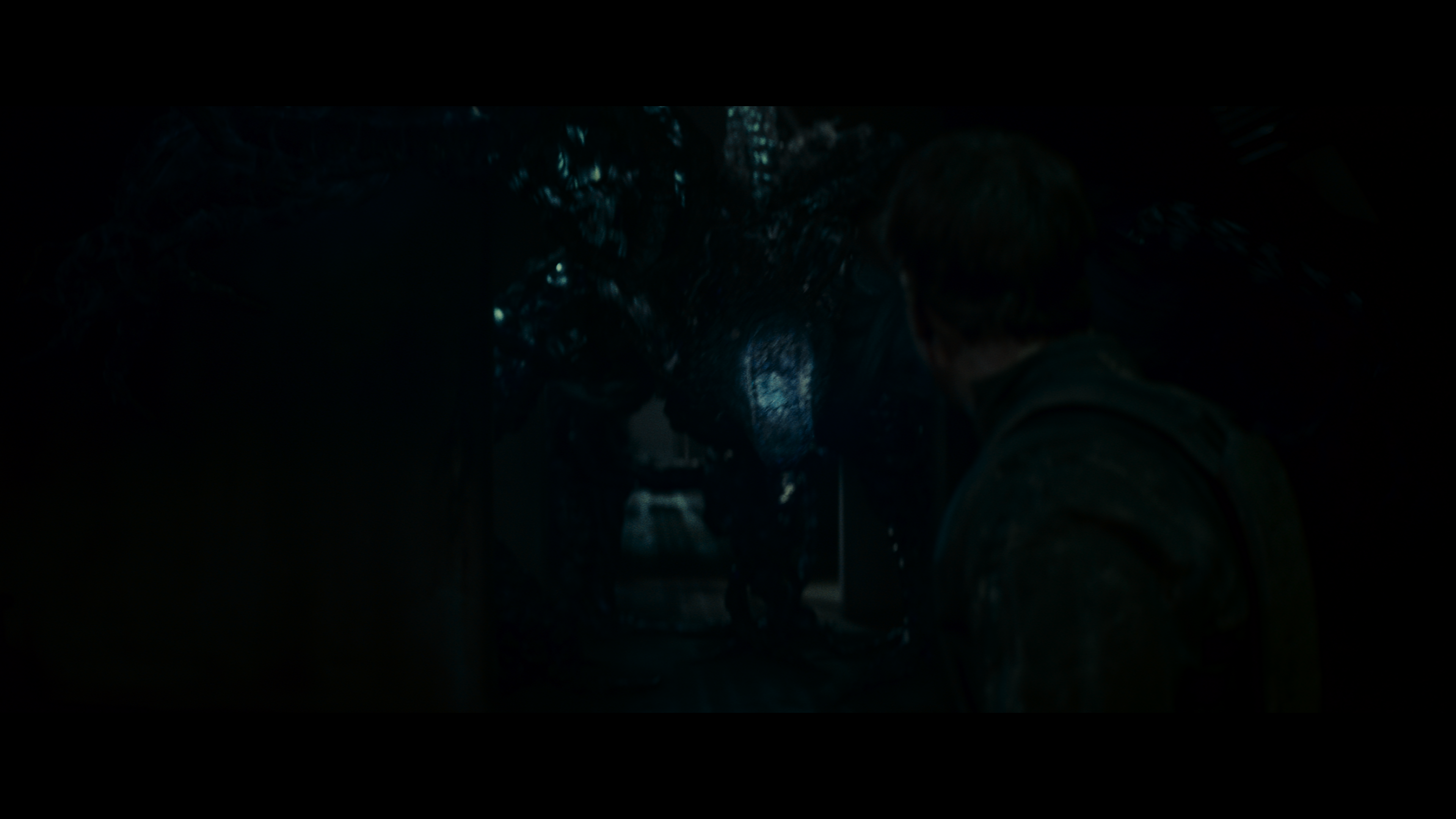 Adapted from the novel by Hiroshi Sakurazaka, Doug Liman's Edge of Tomorrow opens with its feet racing and practically never stops until the end. Starring Tom Cruise and Emily Blunt as soldiers battling an alien invasion by endlessly repeating the same day, the sci-fi actioner remains an edge-of-your-seat spectacular that effectively uses the time-loop premise to its advantage. The movie storms the shores of Ultra HD with a beautiful 4K HDR10 presentation and a fantastic, near-reference Dolby Atmos soundtrack, offering a noteworthy upgrade over its Blu-ray predecessor although the bass will leave some wanting a bit more. Overall, this UHD edition makes for an awesome, highly-recommended addition to the 4K library.