In the new era of Ultra HD Blu-ray, the arrival of the now five-film Bourne franchise is a perfect time to look back at the film that started it all, The Bourne Identity. (Check out all of the Ultra HD Blu-ray Bourne reviews, including The Bourne Supremacy, The Bourne Ultimatum, The Bourne Legacy, and Jason Bourne). This 2002 movie is so fascinating for home theater owners that High-Def Digest has previously reviewed it on HD-DVD (before there was a third film), and twice on standard Blu-ray when it was still part of a trilogy.

For this reviewer, I've had a lot of years to come to grips with Identity and with Matt Damon as the iconic Jason Bourne. As much as I can attempt to give the film a fresh look as a standalone product, one viewing of the alternate ending and beginning sequences (on the included standard Blu-ray) is enough to know that this movie is for me, forever tied with its sequels (or at least, Supremacy and Ultimatum). Still, Identity has its quirks, and is the origin for both Bourne as a re-born, independent asset, and as a bad-ass.

Why the handlers and other intelligence officers in charge never seem to grasp Bourne's desire to simply be left alone is now one of those plot points that defies common sense. (Or even more granular elements, such as an elite assassin that would carry around a printout of the target.) 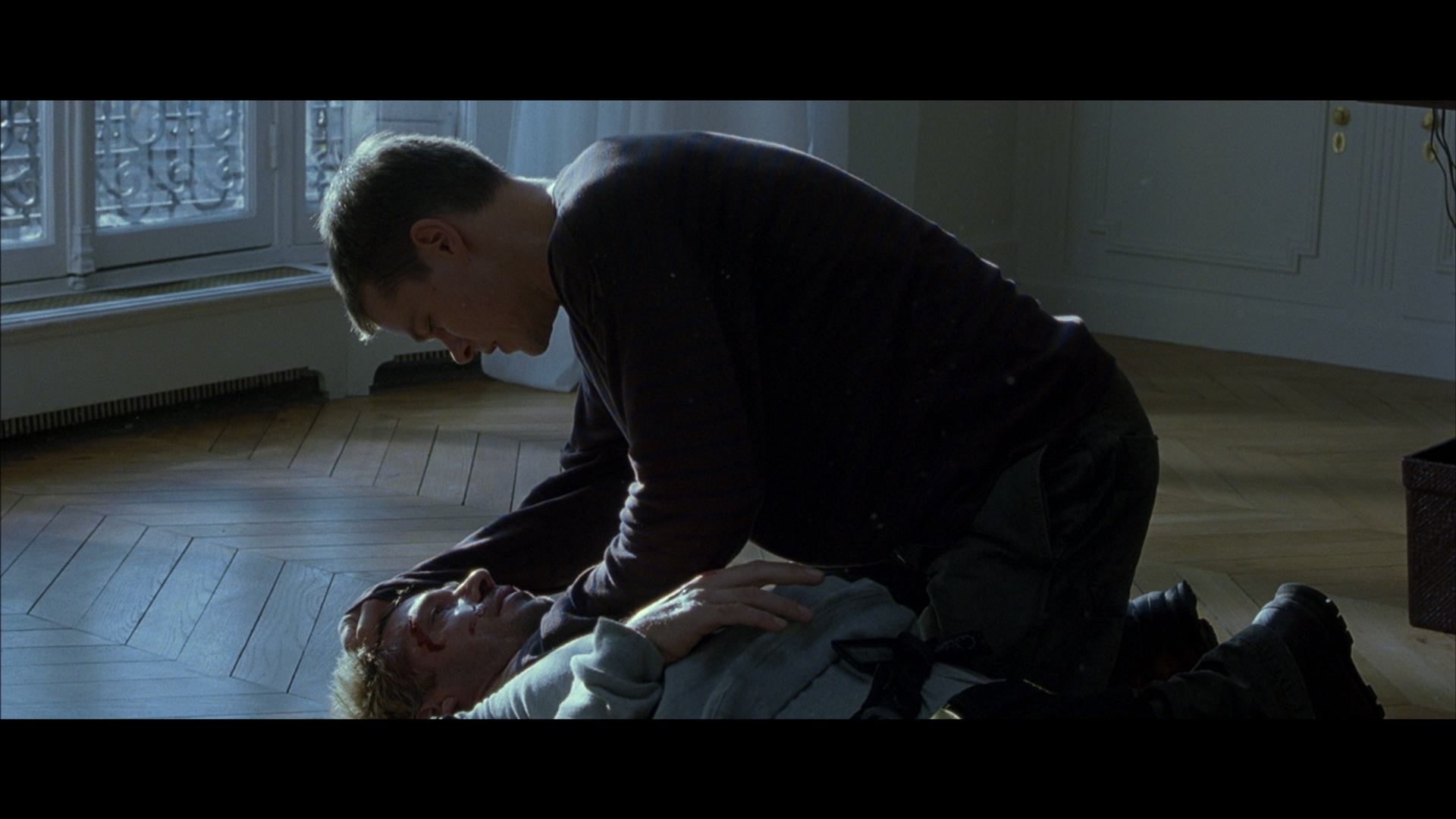 This does make the first Bourne a tricky animal. The setting, cinematography, the score, etc. all have the trappings of an espionage thriller, but the plot and the plotting are both simple and brisk. The romance story is also kind of funny as Bourne finds himself needing a ride and only able to hire out the nearest hot mess.

But as ever, it's the action quotient of the movie, specifically, JB's ability to thwart and evade all comers that makes for the much-desired thrills. Whether that means an embassy full of soldiers and police or other supposedly Bourne-level operators, JB is too tough, too quick, and too stealthy to be pinned down. Again, those characteristics seem at odds with an agent who blew a mission and was found floating and effectively bullet-ridden, but the trip down memory lane is as fun as JB's leaping stairway strike.

Marie (Frank Potente) quickly becomes an important part of the film and the Bourne character, and gives him someone halfway normal to socialize with. Meanwhile, many of Bourne's adversaries are so good, like Clive Owen, that it is almost a shame that they are dispatched forthright. (Or in one case, self-dispatched.) Unlike some of the later films, Identity keeps its running time tight and taught, and remains fun both with and without the rest of the franchise. 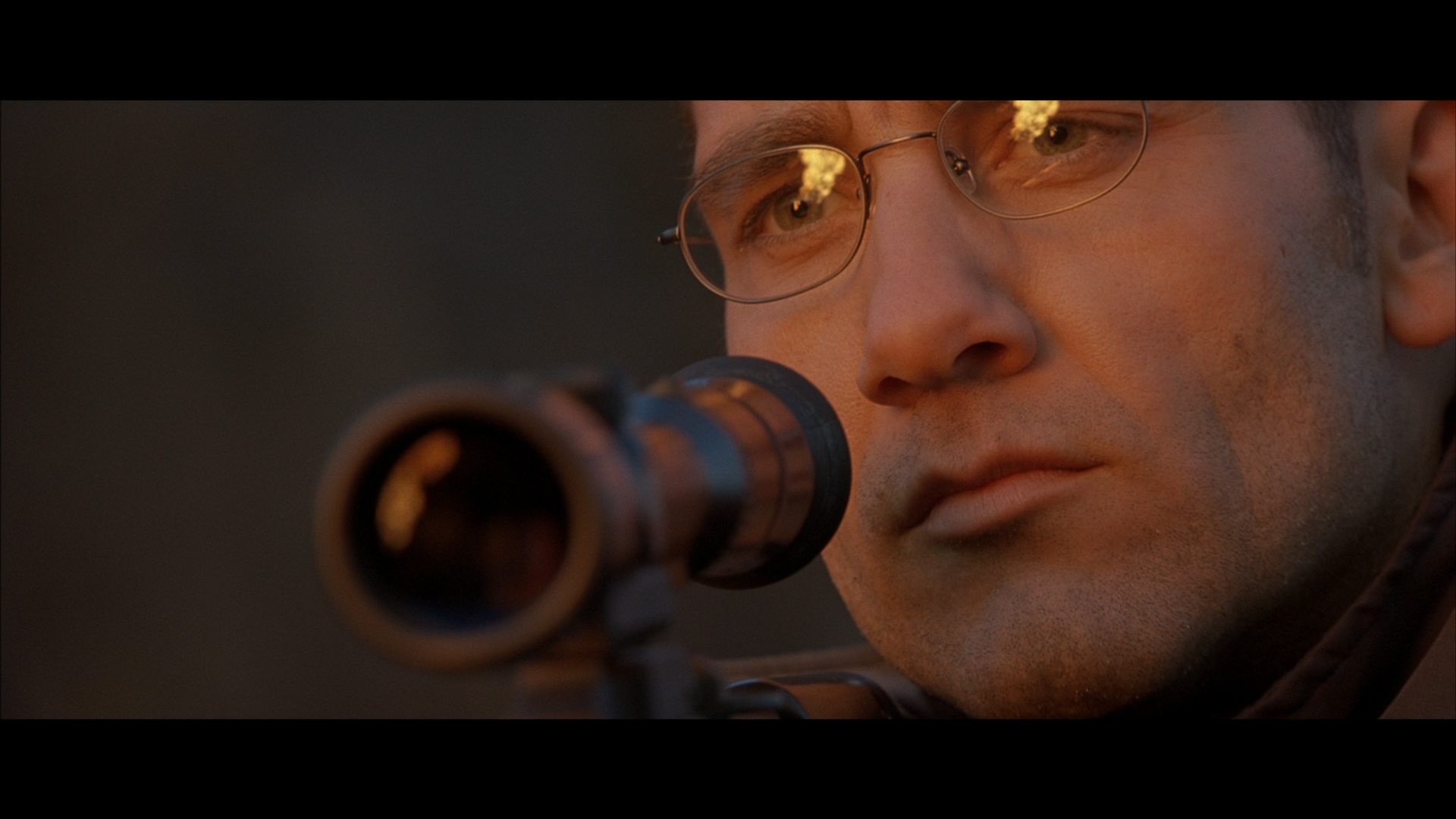 Universal brings The Bourne Identity to Ultra HD Blu-ray both as an individual release, and as a Best Buy Exclusive (until June 6, 2017) in the Bourne Ultimate Collection. The individual release comes as a two-disc combo with a flyer for the Digital HD version, which with Vudu, yielded the Vudu UHD version, complete with Dolby Vision and Dolby Digital Plus support. The Ultra HD Blu-ray disc is designated as a BD-66 and has Bourne disc art with a dark background, which is a little bit nicer than the blue and silver standard Blu-ray. The disc goes straight to the menu, and the menu features the same video loop as the Blu-ray but in full-frame and without the old familiar Universal menu design.

Hailing from all the way back in 2002, The Bourne Identity is one of the series' stand-outs. Not only is it less slick and clean than the other films, but much of the movie is set in cold, overcast locales and unlit rooms. This is a movie that really shook-up a couple of sub-genres, and yet it clearly is channeling espionage films from the at least the 1970s. At the same time, the ever-present muted color pallet of many modern movies is on-hand, but at least, when combined with a very film-centric look, the photography of The Bourne Identity in 2.35:1 remains interesting even after several other installments and imitators have had their turns.

On Ultra HD Blu-ray, The Bourne Identity suffers from several soft images, with items like the CIA HQ exterior looking like stock film. Meanwhile, black levels are improved somewhat, which is a real aide to some scenes, such as when Bourne is faced with other operatives, but doesn't do much to improve the various flashback scenes and their purposely obscure subjects.

Listening to The Bourne Identity in DTS:X, and I have to imagine that when creating the new mixes for the first four Bourne movies, The Bourne Identity came first. The first film's sound design has always had some dramatic dynamic range, and now in DTS:X, this medley of quiet and loud scenes also features an extra sensation. From the jump, the raging waters that introduce JB have an active stormy presence. And whether it's in the train station, in the park, or even in the quiet French apartment, the DTS:X mix has something extra to emphasize.

The score, including the somewhat iconic end music, might sound the best it has in the home theater. Compared with the DTS-HD Master Audio 5.1 of the Blu-ray, this is a more immersive mix. And that familiar mix is also available on the Ultra HD Blu-ray, along with a DTS Headphone:X track, and Spanish and French DTS 5.1.

The only supplement/bonus on the Ultra HD Blu-ray is the Doug Liman Audio Commentary. The Alternate Opening and Ending which is in rough SD on Blu-ray, is certainly worth watching, though the accompanying Introduction does elicit some further questions.

Audio Commentary - With Doug Liman. Universal inexplicably dropped this track from the "Explosive Edition" (in fact, Liman doesn't appear on any of that set's extras), so it is great to see it return here. Though Liman has gained a reputation in Hollywood lately for being "difficult," he certainly gives great commentary. Precise, thoughtful, and highly-informative, he talks extensively about just about every aspect of the film that a fan would want, from adapting the book to casting, throughout the tough shoot in foreign locales (complete with challenging, non-English-speaking crews) and complex effects scenes, to Liman's holistic approach to achieving the proper tone and feel of the movie via all its formal elements. A truly excellent track.

The Ludlum Identity, The Ludlum Supremacy, and The Ludlum Ultimatum (SD) - This doc tells a very compact, fascinating story of Ludlum's rise as an author, through the success of the Jason Bourne novels, to how the Ludlum Estate was instrumental in guiding the production of the first two films. For any serious Jason Bourne fan, this three-parter offers some great background on the origins of this film franchise.

Deleted Scenes/Alternate Ending (SD) - Dubbed "Declassified Information," this section kicks off with four main Deleted Scenes totaling 7 minutes: "Private Jet," "Bourne and Marie by the Side of the Road," "Psychologist Discusses Bourne" and "Bourne and Marie Practice on Subway." None of these scenes are particularly interesting or enlightening, and were all arguably wise cuts. There is also an "Extended Farmhouse Sequence" that also doesn't offer much beyond what's in the flick. Finally, we have the Alternate Opening and Ending, which were much-touted on the "Explosive Edition." Shot in response to 9/11, the opener turns the whole flick into a flashback(!), while the ending is all touchy-feely and pretty bad. Offering a fresh 4-minute Introduction to this new material are Marshall, Gilroy, and actor Brian Cox.

The Birth of 'The Bourne Identity' (SD, 14 min) - This extra is standard-issue EPK fare, including on-set interviews with executive producer Frank Marshall, screenwriter Tony Gilroy, stars Matt Damon, Franke Potente and Clive Owen, plus more cast and crew members. Filled with the usual basic overview and plot recap, this one's pretty useless for anyone with more than a remedial knowledge of the Jason Bourne character.

The Bourne Mastermind: Robert Ludlum (SD, 5 min) - This extra introduces us to the late author Robert Ludlum via his two friends, editor Martin Greenberg and actor James Karen. Less about the creation of Jason Bourne, and more about Ludlum himself, this one offers much needed context on how the project came to be.

Access Granted: An Interview with Screenwriter Tony Gilroy (SD, 4 min) - The writer explains the challenges in adapting Ludlum's original novel for the screen, particularly the (controversial) removal of a key character in the book.

From Identity to Supremacy: Jason & Marie (SD, 4 min) - This extra contains thoughts from Damon and Potente on their characters, as well as what's to come in 'Bourne Supremacy.' Far too short and commercial to be of much interest.

The Bourne Diagnosis (SD, 3 min) - A quick chat with UCLA psychiatrist Reef Karim, who suggests that Bourne's amnesia in the film stretches the bounds of realism just a little.

Inside a Fight Sequence (SD, 5 min) - Features some on-set production footage of director Doug Liman as he constructs a key scene with Damon and stunt coordinator Nick Powell.

While it's not my favorite Bourne film, The Bourne Identity is still re-watchable and enjoyable after all these years. It is the alpha for Matt Damon's Bourne, and will continue to be a strong influence on a variety of sub-genres for years to come. Considering the source, this Ultra HD HDR10 version is the best looking that I would expect to find for this film in the near future. The DTS:X track is an early notable treat for the format. Recommended.

Sale Price 14.84
List Price 22.98
Buy Now
3rd Party 5.14
In Stock.
See what people are saying about this story or others
See Comments in Forum
Previous Next
Pre-Orders
Tomorrow's latest releases