In the new era of Ultra HD Blu-ray, the arrival of the now five-film Bourne franchise has us looking back on each film in the series. (Check out all of the Ultra HD Blu-ray Bourne reviews, including The Bourne Identity, The Bourne Ultimatum, The Bourne Legacy, and Jason Bourne). The first sequel in the spy thriller/action set is the style-setting The Bourne Supremacy, which High-Def Digest has previously reviewed on HD-DVD (before there was a third film), and twice on standard Blu-ray when it was still part of a trilogy. 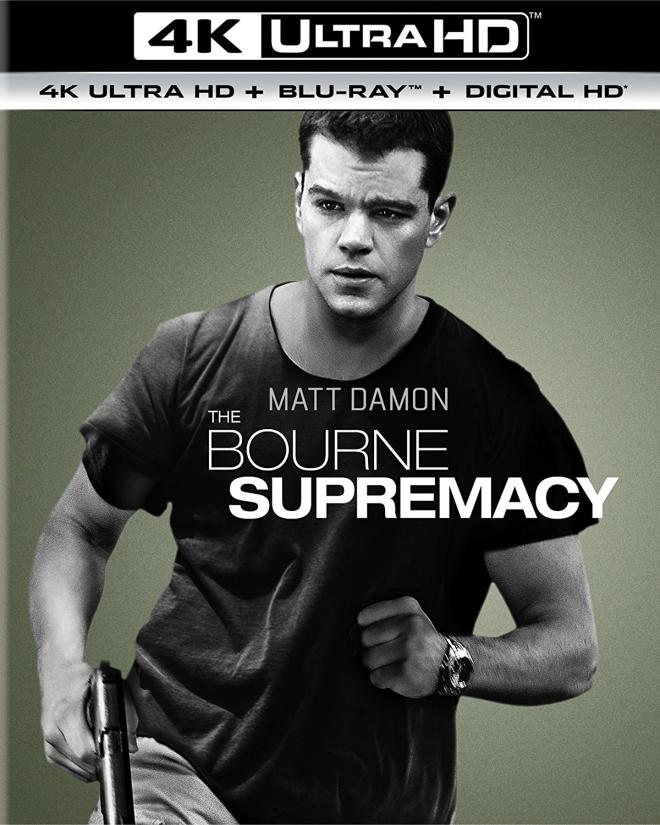 The Bourne Identity did a fantastic job opening the door for sequels. Not too much was revealed about the past of the amnesiac rogue agent, creating the possibility to flesh out his tale, both his past and his future on the run. Cue The Bourne Supremacy. Released just two years after the original, the second go round for Jason Bourne (Matt Damon) relies heavily on the original to tell the tale, rather than creating its own cohesive story capable of standing on its own two legs. (And by the fifth film, that aspect could almost be considered a series' staple.)

Treadstone took the fight to Bourne's doorstep, so now, the favor is going to be returned. After an assassin ends the life of the one person close to Jason Bourne, bygones will no longer be bygones. The fact that Bourne has also been framed for the murder of two American agents in Berlin has those who hunted him in the past back on his trail. (Another series staple.) With no one to turn to and nowhere to hide, the entire globe has to be on alert, as Jason Bourne is back on the scent, seeking out the truth, hoping to clear his name, and go back to seclusion in parts unknown. 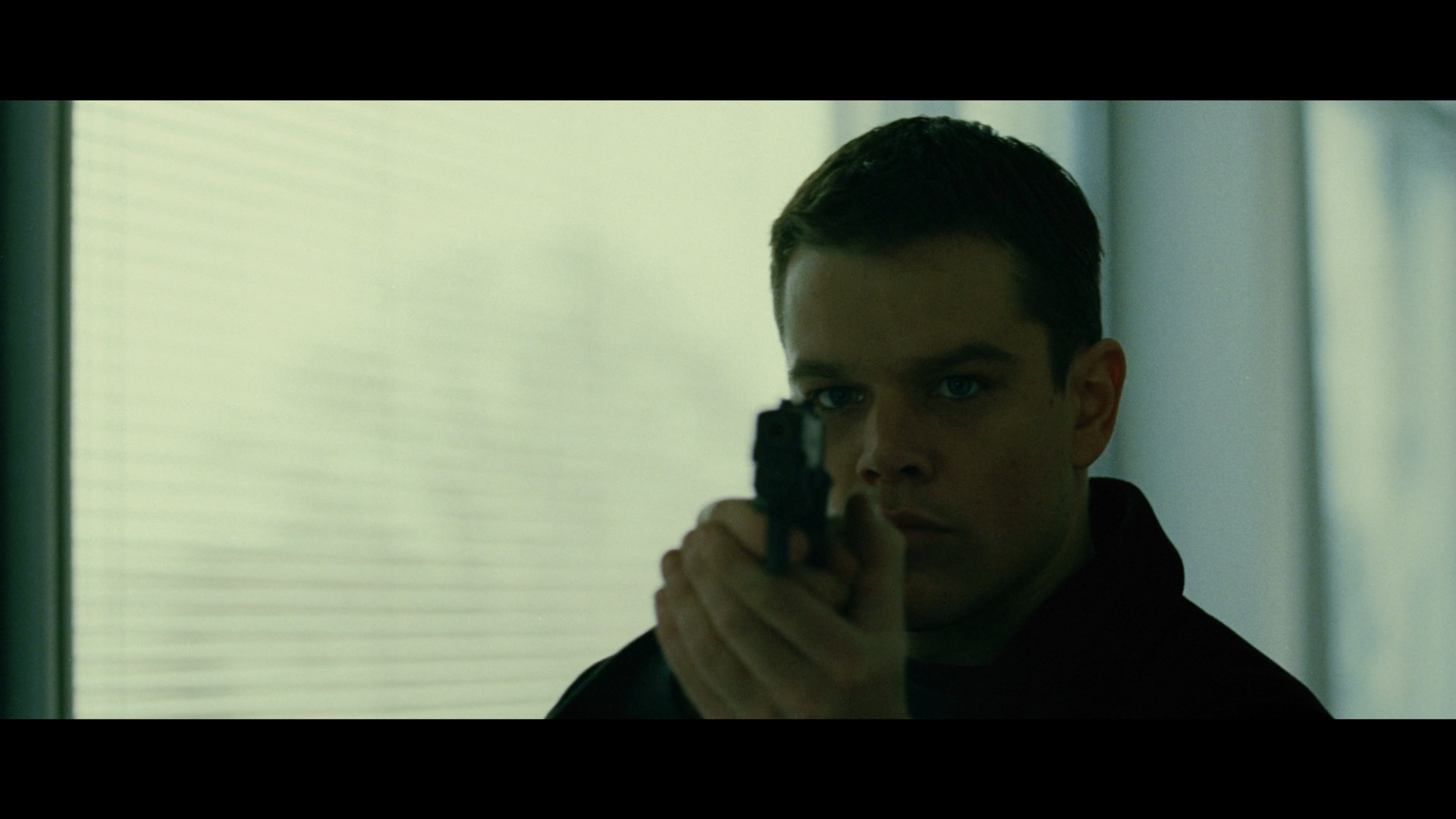 The Bourne Supremacy works on many levels, just not on the same level as the original. The story line is a direct role reversal, as the hunted is now the hunter, even though he's still somewhat hunted. This isn't Bourne running. This is Bourne pissed off, wanting answers. He may not know what is going on, but he knows how to play these angles.

The villains in this sequel are a hair less effective than before, with Brian Cox receiving an increased amount of screen time, replacing Chris Cooper, in a sense. Joan Allen (portraying Pamela Landy, no relation to Tom) leads the U.S. task force seeking to bring Bourne in (or down), though she lacks any ominous presence. She is, in a sense, the conscience of the film, and not even a villain at all, save for the fact that Bourne initially believes her to be one. There's only one assassin this go round, with Karl Urban playing a hired Russian hand, and he is effective, but hardly a riveting villain. In fact, he's utterly forgotten for the entire second act of the film.

The Bourne Supremacy leaps around the globe as though it were a hopscotch game, telling a tale that spans many countries, but as the languages of the land changes, so does the theme of the film. In India, Bourne is hiding in plain sight, though constantly in fear of being spotted. In Germany, Bourne is an investigative reporter of sorts. Russia? All out kick ass machine. USA? Stalker, creepy, creepy stalker. It is almost like our lead hero has a case of multiple personalities rather than amnesia, changing personas more often than he changes his underwear.

Doug Limon, the director of the first film, is gone, and has been replaced by Paul Greengrass, who went on to direct both The Bourne Ultimatum and Jason Bourne. The change in style between the helmers is drastic, as Greengrass's frenetic, often shaky visual styling that became a trademark of sorts varies drastically from the methodical and somewhat moody lingering of Limon. Both styles work quite nicely with the material, but the overlap in the middle of the series creates a two-toned blend.

The Bourne Supremacy has plenty of action, and another quite memorable car chase, though with a drastically different tone (ie, with gunfire a blazin') than the one found in the first. The search for answers is as strong as ever, though with varying random flashbacks that somewhat detract from the film. What's missing, though, is the human element, as Marie (Franka Potente) was a great anchor to the story, grounding Bourne in reality rather than letting him go off as some kill crazy agent. Fans will find more of what they enjoyed from the first, with a very capable second part in the series. Sadly, it's a second installment that gets little to nothing accomplished. 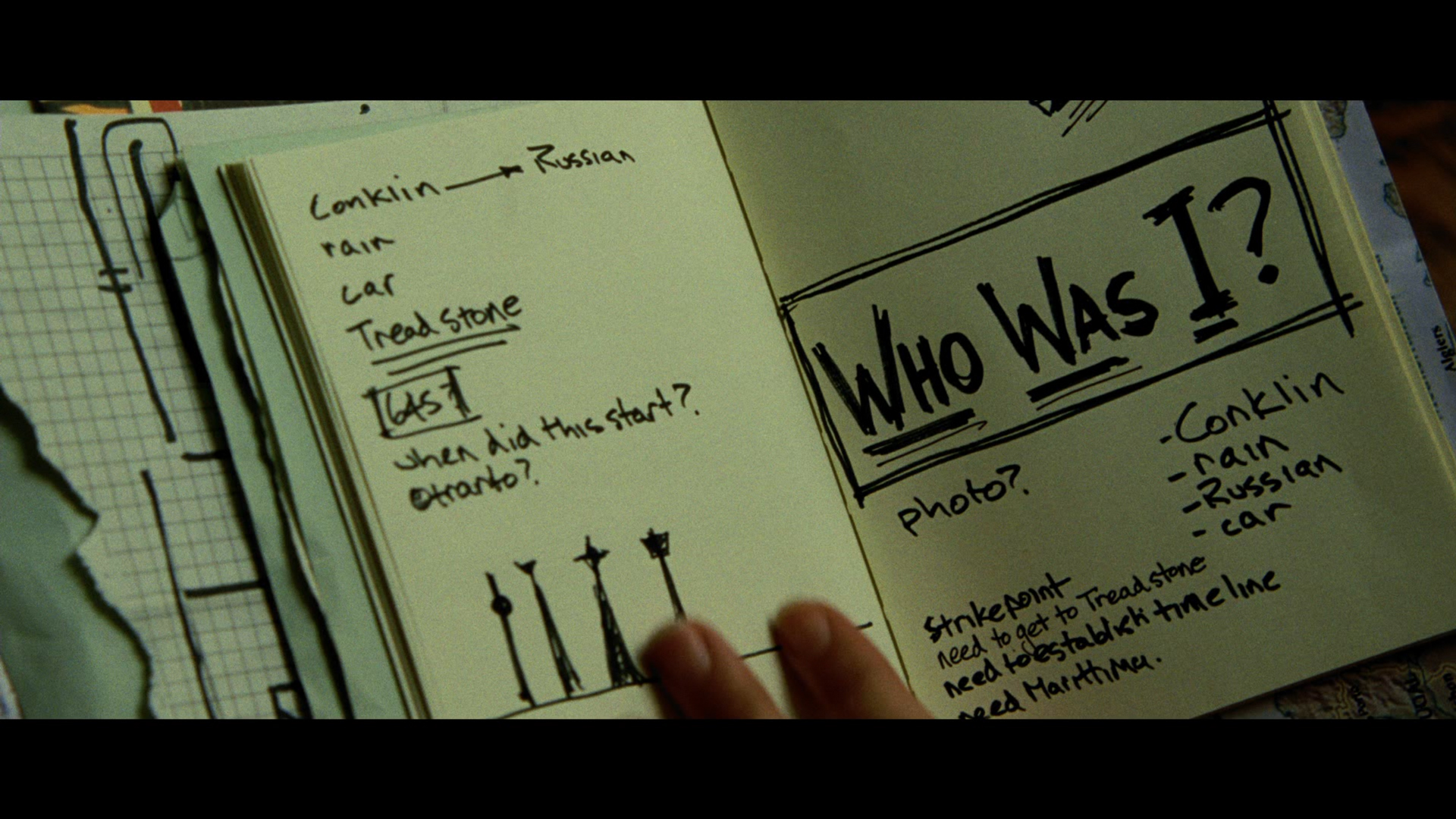 Universal brings The Bourne Supremacy to Ultra HD Blu-ray both as an individual release, and as a timed Best Exclusive, together in the Bourne The Ultimate Collection. The individual release comes as a two-disc combo with a flyer for the Digital HD version, which with Vudu, yielded the Vudu UHD version, complete with Dolby Vision and Dolby Digital Plus support. The Ultra HD Blu-ray disc is designated as a BD-66 and has Bourne disc art with a dark background, which is a little bit nicer than the blue and silver standard Blu-ray. The disc goes straight to the menu, and the menu features the same video loop as the Blu-ray but in full-frame and without the old familiar Universal menu design. 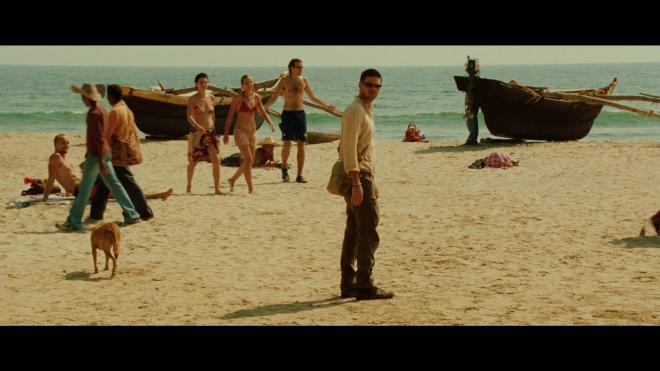 Like the preceding film, The Bourne Supremacy suffers from soft images that can be distracting during a 4K UHD presentation, but it is not as rampant an issue. The digital intermediate source is a small letdown, but not an uncommon one. This Bourne installment has a much more diverse color palette which is obvious right away in Goa. There is a nice thematic shift that comes through visually in colder climates in Germany and Russia and the warmer Italy and India. (It's here where the New York gotcha Pam encounter is first shown, and the coloring is a cold one.) Even in HRDR10, however, this fun smattering of locales can skew from overblown to terribly stark, and even ugly at times. (Such as in the hotel in Berlin.) And yet, this first Supremacy UHD Blu-ray appears to be faithful to the source. 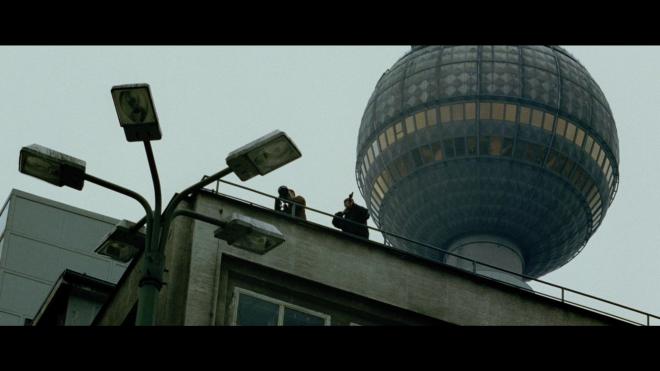 The first sequel in the franchise brought about a more engaging mix, and in DTS:X, the immersive elements are more complimentary to the more consistent presentation. Of course, there are moments where the soundscape becomes very restrained, such as in the apartment fight, which is visceral, but when it's over the music comes storming in and a theatric effect is achieved.

The DTS-HD Master Audio 5.1 mix of the Blu-ray has always been strong, and it remains strong here in DTS:X, most notably in packed scenes such as the Moscow tunnels. The DTS:X mix is bit wilder, but the immersive qualities really just underscore how good the 2004 film sounds today. 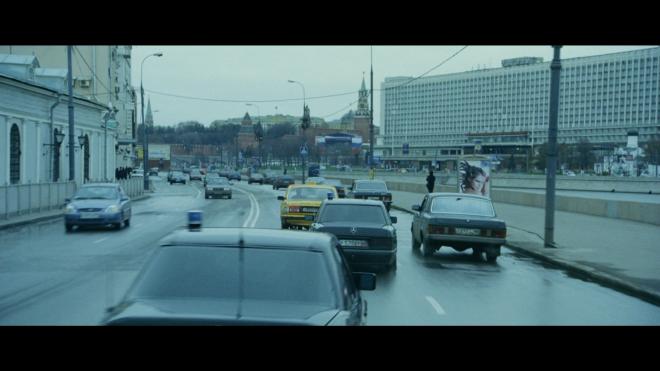 The only supplement/bonus on the Ultra HD Blu-ray is the Paul Greengrass Audio Commentary.

Audio Commentary The most informative extra by far is this screen-specific audio commentary by director Paul Greengrass. For having to fly solo, Greengrass does a fine job, and actually does not focus that much on production specifics. Rather, he delves into great detail on the development of the story, which is pretty much a complete departure from the Robert Ludlum novel aside from sharing its title. Greengrass does get into a few nitty-gritty production bits by the second half of the track, but it was typical "how to stage an action scene" stuff, so perhaps that is why I enjoyed the first half more.

Deleted Scenes (SD, 10 minutes) - In total there are five deleted scenes. Four are forgettable, but the last one is noteworthy, a meeting between the film's CIA team that pretty much explains the entire convoluted story of the movie. I guess it was removed because it may have spelled things out too much, but I think it really would have helped slow viewers like me, who have trouble keeping up with these intricate spy thriller plots.

Matching Identities: Casting (SD, 5 minutes) - The first featurette gives us a brief look at the the film's impressive ensemble, though I hoped to hear a bit more from Matt Damon on why he decided to return to the franchise for a second go-round.

Keeping it Real (SD, 4 minutes) - At last -- we learn why Greengrass decided to make everyone sick with that shaky camera work. I'm still not convinced.

Blowing Things Up (SD, 4 minutes) - Here, the filmmakers take considerable pride in their film's avoidance of CGI effects in favor of the real thing. Yeah!

On the Move with Jason Bourne (SD, 3 minutes) - A breathless travelogue that tries to cram in the film's globetrotting locations in less than four minutes. Total padding.

Bourne to Be Wild: Fight Training (SD, 4 minutes) - This extra gives us a quick overview of the film's middle-act shaky-cam masterpiece of fight choreography.

Crash Cam: Racing Through the Streets of Moscow (SD, 5 minutes) - Another back-patter on how to mount a convincing car chase without CGI and blue screen.

The Go-Mobile Revs Up the Action (SD, 6 minutes) - Running the longest of the featurettes, this feature focuses specifically on a new camera technology that allowed the filmmakers to film the Moscow car chase so convincingly.

Anatomy of a Scene: The Explosive Bridge Chase Scene (SD, 5 minutes) - The last of the segments actually has no explosions in it, unless you count Damon having the balls to actually jump off a bridge into a garbage truck.

Scoring with John Powell (SD, 5 min) - A few minutes on the creating of the film's score, which honestly I didn't find that memorable anyway.

The Bourne Mastermind (SD, 5 min) - A piece on the late author Robert Ludlum. It briefly outlines his inspiration in writing the 'Bourne' book trilogy, and everyone gushes about how happy he would have been with the movie versions. (Or at least how much money they raked in for his estate.)

The Bourne Diagnosis (SD, 6 min) - A look at the physiological realities behind the kind of amnesia Bourne experiences in the first movie. It features an interview with amnesia specialist Miriam Davis, as well as the filmmakers and cast, and though it doesn't shed too much light on the medical issues involved, it does give us some insight on the characters and story. 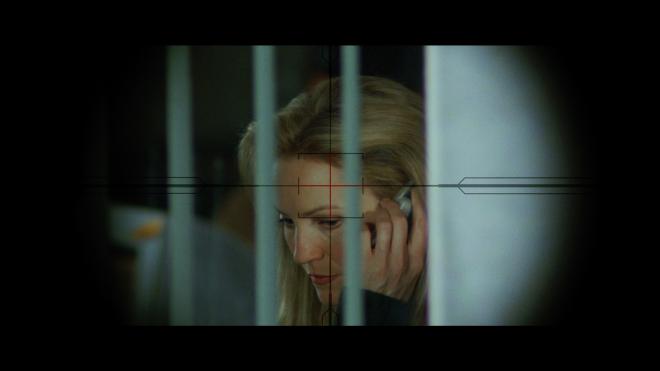 Even before the fourth and fifth film of the series, the The Bourne Supremacy came off as a bridging part of the series, and yet, there's no denying the excellent and much-imitated action beats, especially in Moscow. The Ultra HD Blu-ray version of the film brings it all forward with a bump in picture quality thanks to HDR10 and a new, fun DTS:X track. Recommended.

Sale Price 17.51
List Price 22.98
Buy Now
3rd Party 16.99
In Stock.
See what people are saying about this story or others
See Comments in Forum
Previous Next
Pre-Orders
Tomorrow's latest releases