Everything Everywhere All at Once - 4K Ultra HD Blu-ray

Starring Michelle Yeoh, Jamie Lee Curtis, Ke Huy Quan, Stephanie Hsu and James Hong, the filmmaking duo Daniel Scheinert and Daniel Kwan's Everything Everywhere All at Once is a bizarrely entertaining and ingeniously heartfelt surprise molding several genres, wildly creative visuals and deeply complex ideas into a harmoniously poignant, heart-warming portrait of one person's existential crisis. The everything bagel threatens the multiverse on Ultra HD with an awesomely mesmerizing 4K Dolby Vision video, an absurdly fantastic Dolby Atmos track but a small selection of bonuses. Nevertheless, the overall UHD package is Highly-Recommended and belongs in every 4K library.

From the same imagination that brought us the surreal comedy Swiss Army Man, Daniel Scheinert and Daniel Kwan's even more bizarrely entertaining Everything Everywhere All at Once is an ingeniously bonkers phantasmagoria that is just as moving as it is visually thrilling. The story about a mother struggling to find stability and contentment in her life weaves through some emotionally poignant issues with the same insightful fervor and care as it does stitching together multiple genres into a harmoniously balanced and memorable experience. Simply put, this genre-bending absurdist drama is a phenomenal, endearingly insightful motion picture that easily ranks as one the best surprises of the year, alongside Top Gun: Maverick, Happening, Hellbender, You Won't Be Alone and Hatching — all films defying their genre trappings, exceeding expectations and delivering an unexpectedly moving and highly satisfying tale.

And here, the Daniels, as they are collectively known, center their plot around the day in the life of Evelyn Quan Wang (a wonderful Michelle Yeoh) as she stressfully prepares for an IRS audit on her struggling laundromat while neurotically organizing a new year's party for her father (James Hong). The opening minutes masterfully display the struggle of balancing a job, a home and a family with a mirror showing a colorfully joyous memory of a happy family merely enjoying each other's company and living in the moment. That image is quickly supplanted by a dining table, the stereotypical setting for family gatherings, stacked with receipts and paperwork being arranged for the auditor (Jamie Lee Curtis). This is one of many simple moments that speak volumes in a film that embraces the visually elaborate and intricately fanciful. This simplicity touches on the real stress of juggling too much in this contemporary digital age.

When overwhelmed with more than we are really equipped to deal with, we are prone to ignore and neglect the more important aspects of our lives, overcome by anxiety to solve everything all at once, leading to a fractured sense of self and desiring to somewhere else, to be someone else. Evelyn has been so preoccupied that she has been living completely blind to an unhappy marriage with the always upbeat and optimistic Waymond (Ke Huy Quan of The Goonies and Indiana Jones and the Temple of Doom fame). At the same time, her daughter Joy (Stephanie Hsu) is at the breaking point waiting for mother to accept her and her girlfriend Becky (Tallie Medel). On this particular day, Evelyn's universe, the one she has worked so hard to build for years while foregoing the many dreams she wished to accomplish for herself, is now under threat, on the brink of collapsing all at once, falling into the nihilistic view that nothing matters.

The Daniels' Everything Everywhere All at Once is a truly marvelous accomplishment that balances deeply complex existential concerns, brimming with a passionate, madcap imagination that feels disorganized and artless yet mesmerizingly liberating to witness with a cinematography that boldly borrows from the legendary Wong Kar-wai. And somehow, amid all the visually stunning chaos, the filmmakers reveal a tender, moving portrait of modernity. The absurd black dramedy also works as an allegory or a Menippean satire for the challenges of navigating through this ever-growing, ever-expanding, multiversal social media existence — tempting us with other possibilities and distracting our attention from what's in front us now, in the moment. It's an absolutely brilliant, ambitious masterpiece that is endlessly fun, inspiring and terrifically engaging, sure to be remembered as one of the greatest feats of the 21st Century. 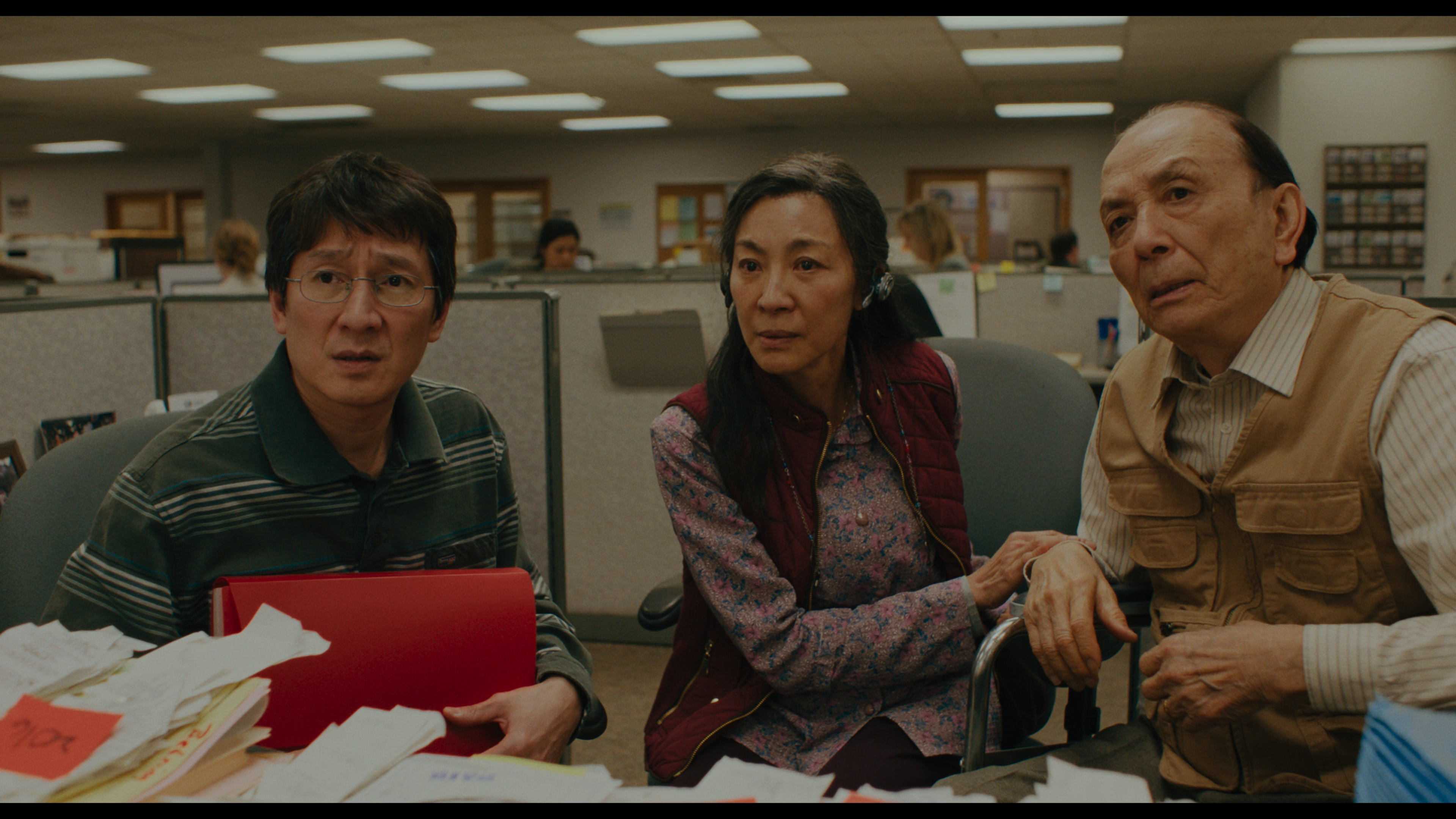 Lionsgate Home Entertainment and A24 bring Everything Everywhere All at Once to 4K Ultra HD Blu-ray as a two-disc combo pack with a flyer for a Digital HD Copy, which can be redeemed via VUDU and unlocking the 4K Dolby Vision HDR version with Dolby Atmos audio. The triple-layered UHD100 disc sits comfortably opposite a Region A locked, BD50 disc inside a black, eco-vortex case with a glossy slipcover. At startup, the disc goes straight to a static menu screen with the usual options and music playing in the background. 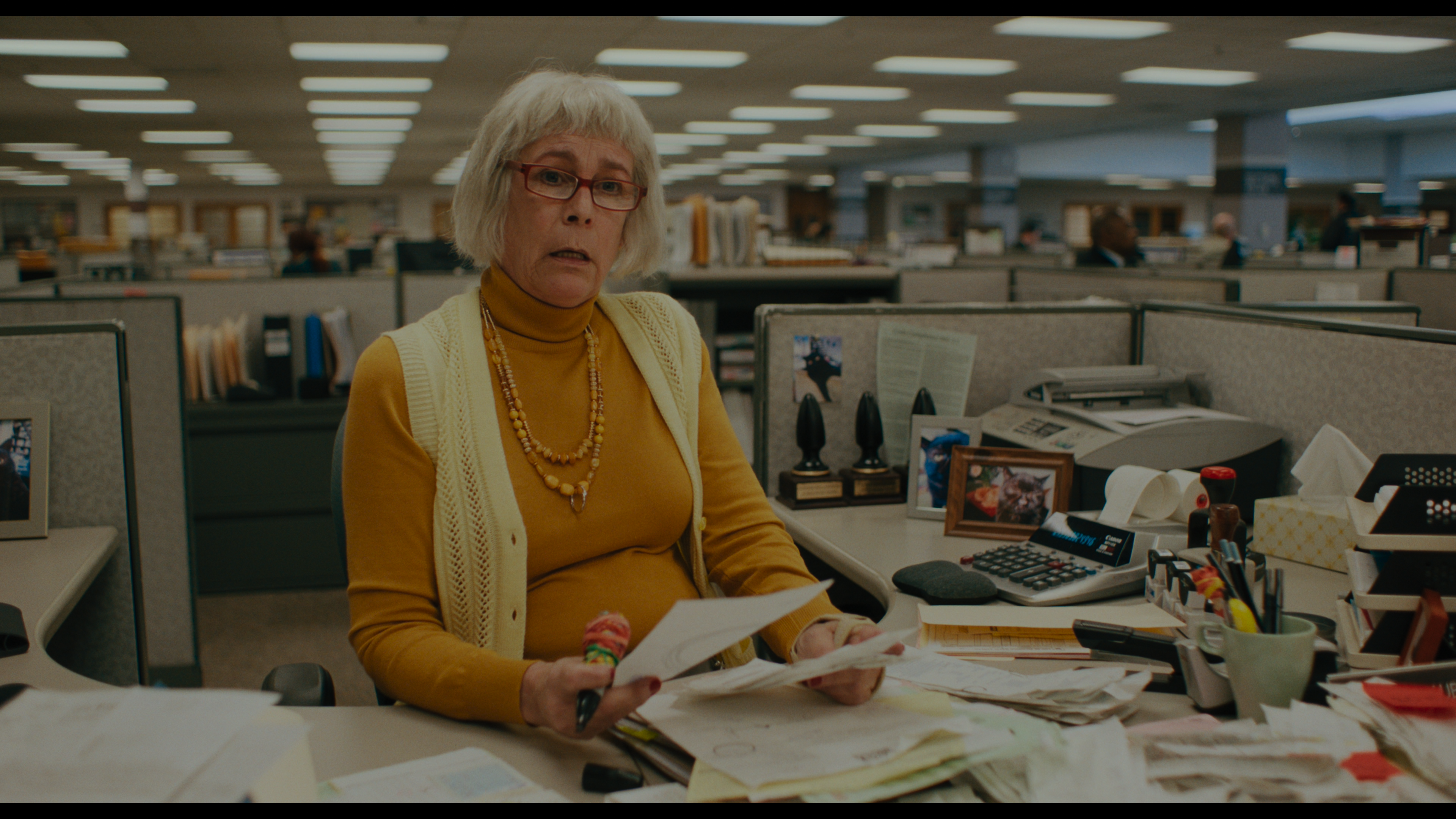 The everything bagel threatens the multiverse on Ultra HD with an awesomely beautiful and often mesmerizing HEVC H.265 encode. Shot on the Arri Alexa digital cameras capable of up to 3.4K resolution and mastered to a 4K digital intermediate, the native 4K transfer comes with excellent definition and clarity, exposing every nook and cranny of the Wang home and the laundromat. Fine lines and details are sharp and distinct, from the stitching and threading of the costumes to the individual objects of the IRS offices, but some of the digital effects and the fast-paced action are not always as discrete, which may have to do with the filmmaker's visual aesthetic.

The film commences with a somewhat subdued, low-key contrast to create a solemn atmosphere and enhances Evelyn's current state of mind, but whites remain clean and vivid while specular highlights supply a crisp, tight sparkle in the hottest spots without washing over the finer details. This deliberately creative approach also affects the colors, displaying a mostly limited analogous palette favoring earth tones, tans and warm yellows. But the visuals suddenly come to life thanks to the Dolby Vision HDR, boasting a larger, fuller selection of primaries and secondary hues, especially whenever Jobu Tupaki makes an appearance. The variety of reds and oranges in the final quarter of the movie, in particular, is impressive and perfectly reflects the tonal shift in the story. All the while, black levels are rich and true from start to finish, providing the alternating aspect ratios, which switch between 1.85:1 and 2.39:1, with appreciable depth and an attractive cinematic appeal. (Dolby Vision HDR Video Rating: 88/100) 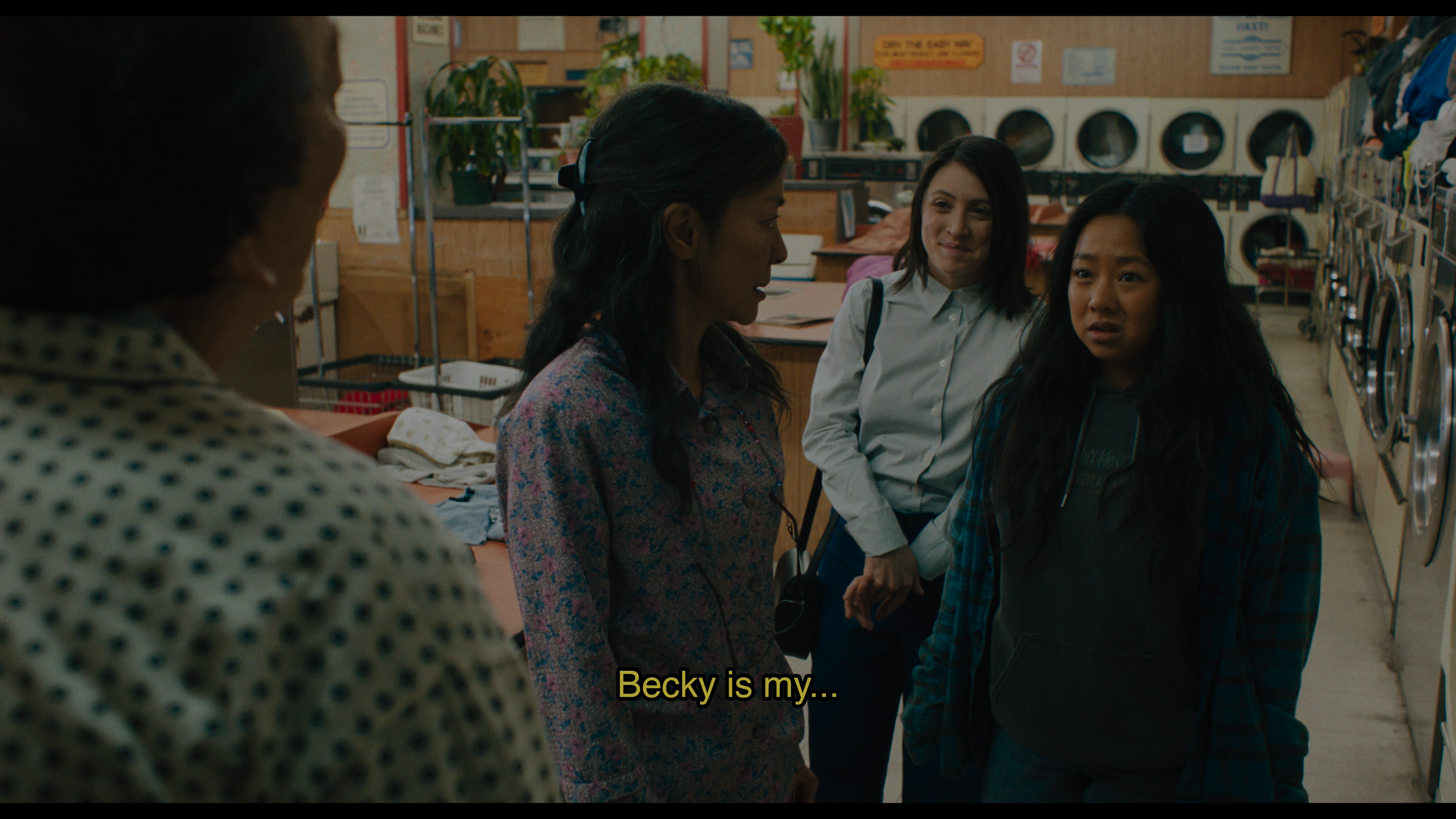 The absurdist fantasy drama verse-jumps to home theaters with an absurdly fantastic Dolby Atmos soundtrack that perfectly energizes and complements the wildly fanciful visuals. Being a character-driven feature, every conversation and line of dialogue always takes top priority, coming in loud and clear even during the loudest, most outrageous segments. While exhibiting superb clarity and distinction in the upper frequencies, imaging continuously feels broad and spacious with lots of background activity convincingly moving across the three fronts and into the top heights to create a highly-engaging half-dome soundstage. Son Lux's score also enjoys excellent fidelity and acoustical detailing throughout while a robust low-end adds a palpable presence to every action sequence with a few surprisingly authoritative moments that dig as low as 20Hz (bass chart). Action sequences are also layered with a variety of atmospheric effects smoothly moving through the surrounds and occasionally panning overhead with flawless effectiveness, generating a satisfyingly hemispheric soundfield. (Dolby Atmos Audio Rating: 94/100) 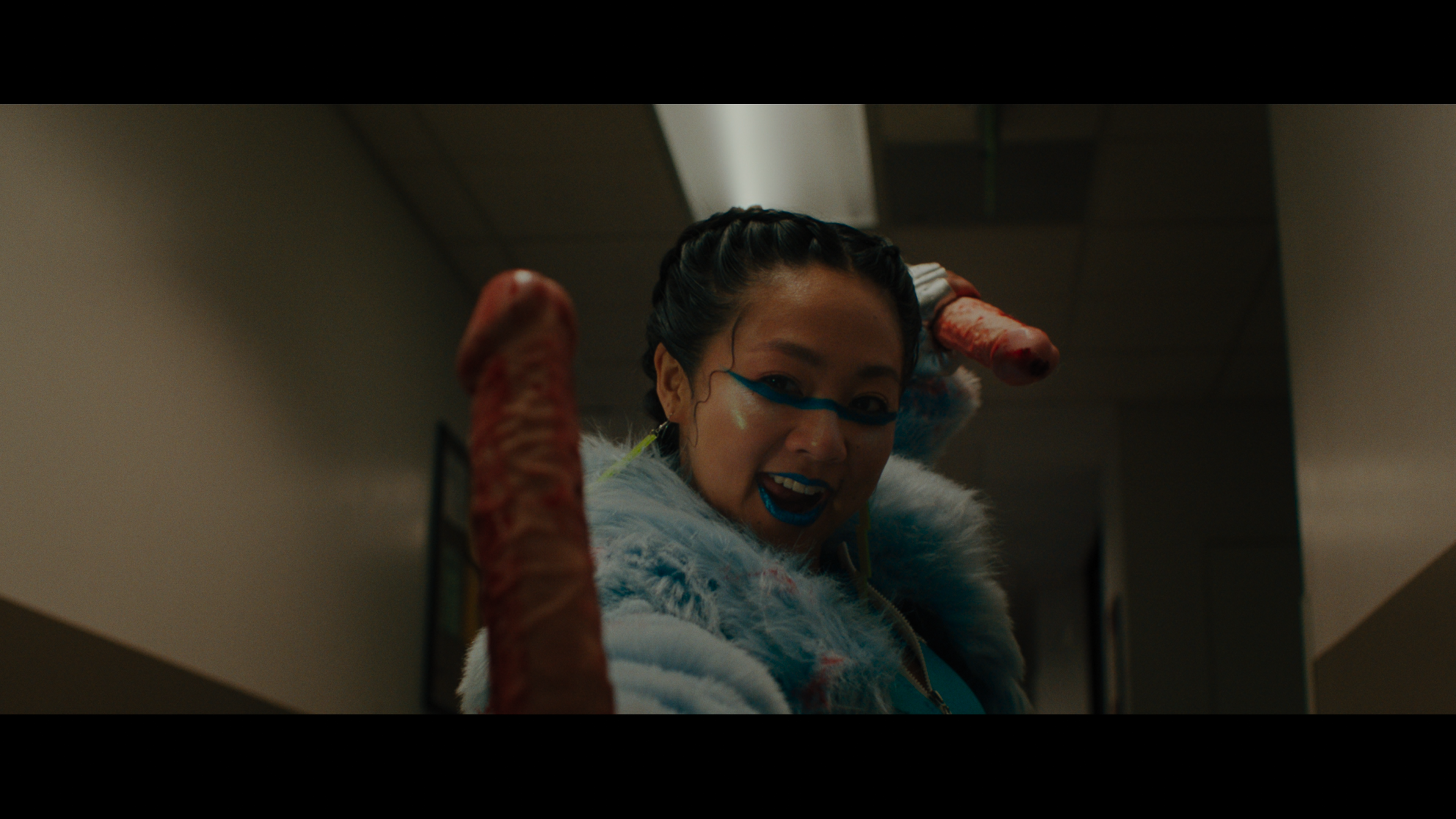 The same set of supplements is shared with the accompanying Blu-ray disc. 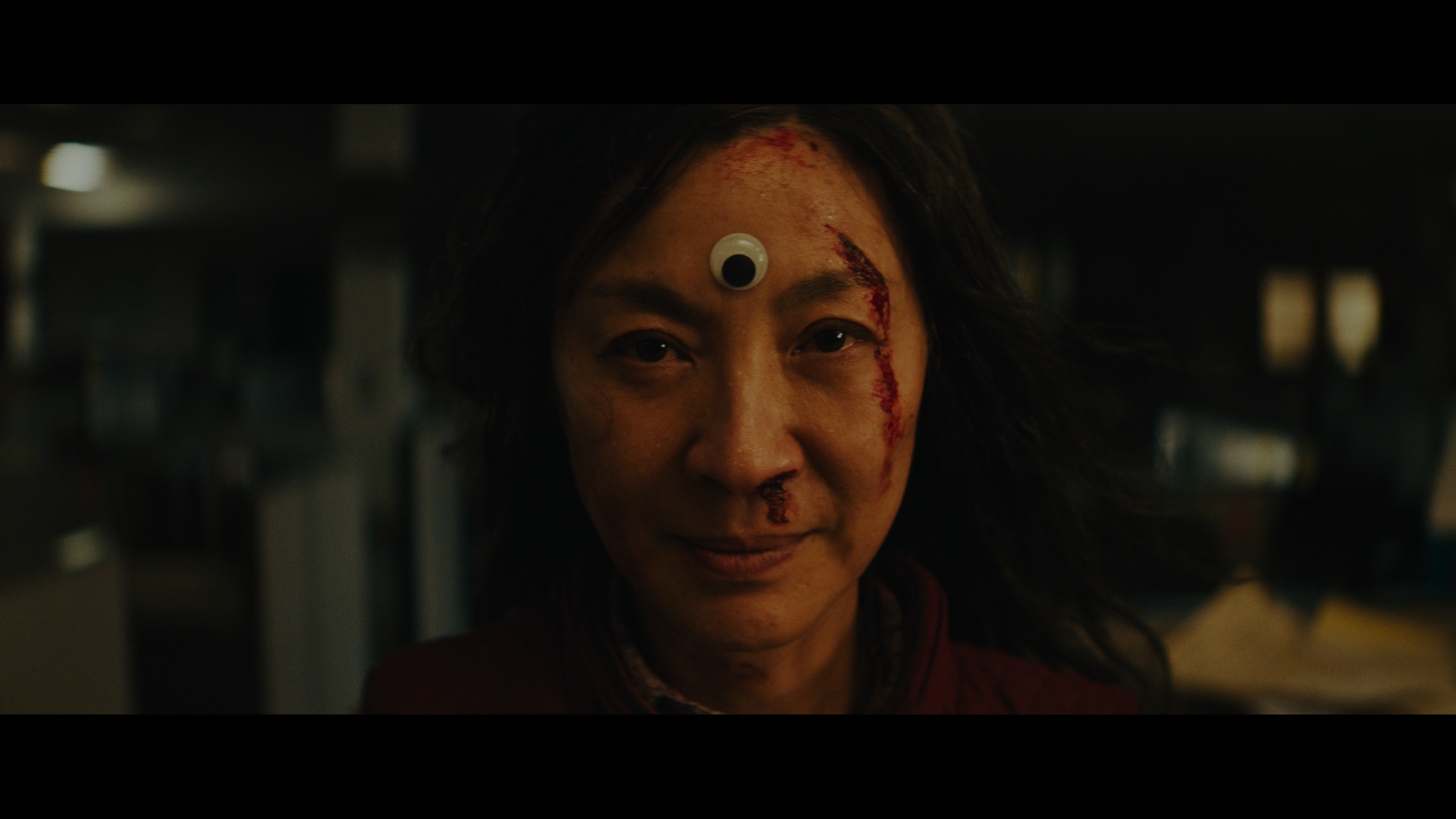 Daniel Scheinert and Daniel Kwan deliver one of the best surprises of the year with their bizarrely entertaining and ingeniously heartfelt Everything Everywhere All at Once, starring Michelle Yeoh, Jamie Lee Curtis, Ke Huy Quan, Stephanie Hsu and James Hong. In centering their plot around the day in the life of a dissatisfied Evelyn, they balance several genres, wildly creative visuals and deeply complex ideas into a harmoniously poignant, heart-warming portrait of one person's existential crisis. The everything bagel threatens the multiverse on 4K Ultra HD with an awesomely mesmerizing Dolby Vision HDR presentation and an absurdly fantastic Dolby Atmos soundtrack. Although the bonus material could be a bit meatier, the overall UHD package is nonetheless highly-recommended and belongs in every 4K library.