After destroying the Nazi plot to control the Arc of the Covenant, everyone’s favorite swashbuckling archeologist with a whip returns in Indiana Jones and the Temple of Doom. While a fan favorite for its darker more horror-focused adventure, this prequel often divides fans as Spielberg struggles to maintain tone and one-up the classic original film. After a rather “meh” first SteelBook outing on 4K Ultra HD Blu-ray, Paramount returns for a new solo offering bringing back the iconic Drew Struzan poster artwork with the exact same disc with excellent A/V quality but absolutely nothing in bonus features. For SteelBook fans and folks who waited to buy these movies solo - Recommended

After barely escaping Shanghai and falling out of a crashing airplane on an inflatable raft, archeologist adventurer Indiana Jones (Harrison Ford) finds himself in India with his trusty child sidekick Short Round (Ke Huy Quan) and lounge singer Willy Scott (Kate Capshaw). Together they’re tasked with helping the village rescue their stolen children and recover the fabled Sankara stones from the deadly Thuggee Cult and their high priest Mola Ram (Amrish Puri).

If there’s a movie in a franchise that often splits fans it’s Indiana Jones and the Temple of Doom. Some are ardent fans calling it the best if not at the very least second best of the four films that have been released. Then there are others that would put it barely a rung above Kingdom of the Crystal Skull. I have to admit I fall under that latter camp. While I think this is a very entertaining sequel/prequel, it’s all over the map for me. It’s trying to be too dark and seriously scary and then it’s trying to be too funny to counterbalance the tone. One minute you’re watching a guy’s heart getting ripped out, the next Cate Capshaw’s Willie Scott is reacting like it's an exaggerated silent film comedy gag. Temple of Doom is never consistent as you can feel Spielberg struggling to keep a grip on the material.

But then there are the action sequences which are some of the best from the director. To Spielberg’s credit, he showcased an expert handle at raising tension and crafting immaculate action sequences. The mine cart chase and the final bridge sequence are some of the best moments of any of his films. It just takes a while to get there! That’s not to say there aren’t some highlight moments throughout, but there’s always been something “off” feeling with Temple of Doom. It’s partly the mishmashed tone, it’s partly how you can clearly tell whenever it’s Ford’s stunt double on screen, and it’s the relatively low stakes of the plot that keep my enthusiasm for this film at a lukewarm temperature. But then again, when this movie is at its worst it’s still better than Kingdom of the Crystal Skull at its best. 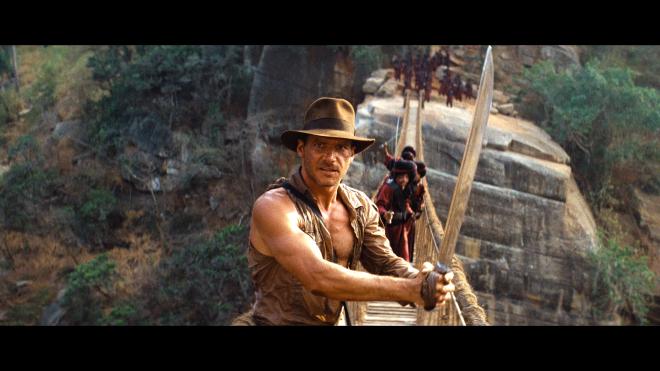 Here’s E’s take on Indiana Jones and the Temple of Doom from our original 4K Ultra HD Blu-ray review:

"As opposed to its predecessor, The Temple of Doom goes more for the frights and thrills than the typical action-adventure flick, yet Spielberg maintains that same high-spirited sense of excitement as before. While still keeping with the spirit of celebrating classic B-movie serials, the follow-up prequel interestingly takes fans back a year prior to Raiders, before the Nazis became a major worldwide threat, and we find our hero battling other sinister forces with ambitions for world domination. Only, a good portion of the story originates from many of the rejected ideas conjured up for the first movie, most of which as the over-the-top and ridiculously unrealistic action sequences that ironically have become some of the movie's most iconic moments. The most crackpot and outrageous of these is the rollercoaster-like chase inside a mine shaft and the dinner scene with a variety of exotic but disgusting foods. 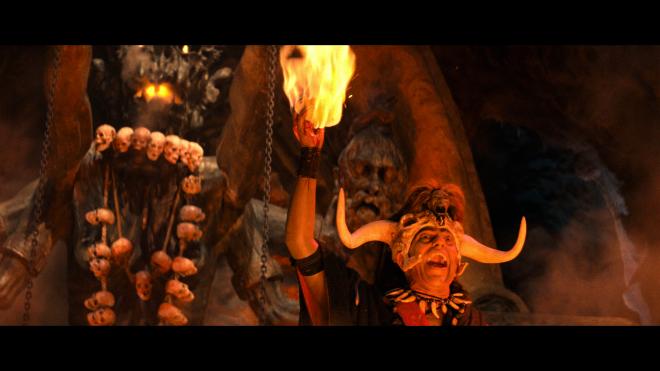 However, no matter how memorable or entertaining these aspects may be, the overall tone of the story feels somewhat out of place within the Indy universe, considering it's about a religious cult of black magic. The plot also follows an extraordinarily dark subject matter involving human sacrifice and child slavery with a terrifying villain in Mola Ram (Amrish Puri). There's also something more cynical and a tad derisive in Ford's performance, like that of a person burned a few too many times in his misadventures with bad people. Thankfully, Kate Capshaw's haughty "Willie" and Jonathan Ke Quan's loyal Short Round are meant to ground Indy while also keeping the story lighthearted as a likable pair of comic relief. Besides, although the creepy horror elements mark a darkly sinister chapter in the series, the movie concludes on a well-deserved happy note and remains a great deal of fun." (Movie Rating: 3.5/5)

Indiana Jones and the Temple of Doom gets a new 4K Ultra HD Blu-ray SteelBook release from Paramount. This single-disc release essentially repackages the already existing disc and gives fans more desirable SteelBook packaging accurately recreating Drew Struzen’s original poster art. There is nothing different about this BD-66 disc from the one already on the market. 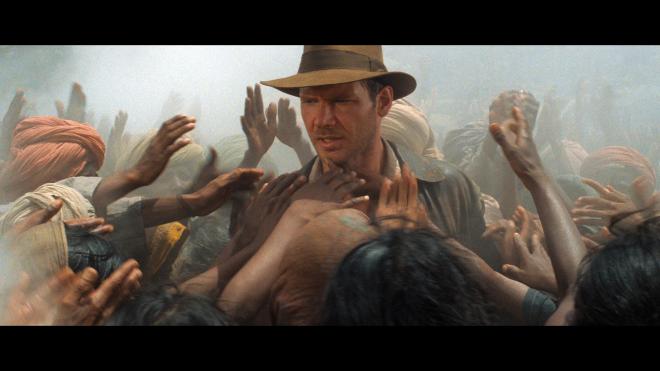 "Arriving in a similar fashion to the first disc, the fresh HEVC-encoded transfer comes with better, sharper details than its HD predecessor, especially in the many exterior daylight shots showing individual leaves in the trees and fine lines in the buildings. Facial complexions have a more lifelike texture to them as well while the jewelry and embroidery of some outfits are quite striking and distinct from a distance. However, resolution wavers more noticeably with several blurry scenes, which are largely the result of the aged photography and the dated visual effects. The worst moments may be the matte painting sequences, but it also remains part of its charm. Nevertheless, the native 4K video is in excellent condition with a consistent ultra-fine layer of grain and rich, accurate black levels, providing the 2.35:1 image with strong shadow delineation in the many poorly-lit interiors and an attractive cinematic quality. 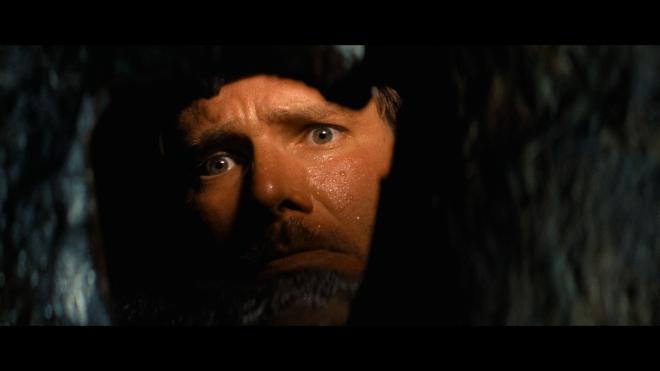 The more immediate improvement is the boosted yet terrifically well-balanced contrast, displaying cleaner, more brilliant whites while giving the photography a welcomed rejuvenated feel. Specular highlights shower the action with a radiant, energetic appeal in the daylight exteriors, and the jewelry benefits from a narrow, beaming sparkle while fire torches and the smooth-polished stones enjoy a tight, crisp glow. The Dolby Vision presentation also displays a richer, more vibrant selection of colors with primaries looking especially fuller and dramatic. Although subtle and nuanced, the overall palette shows a more diverse array of secondary hues, from the softer sandy tans and beiges in some articles of clothing to the dark hickory browns, deep cider oranges and golden honey yellows of the underground temple. Most eye-catching in the resplendent mix of amber, ginger and marigold in the illuminating Sankara Stones, making this a vast step-up over its HD SDR counterpart. (Video Rating: 84/100)" 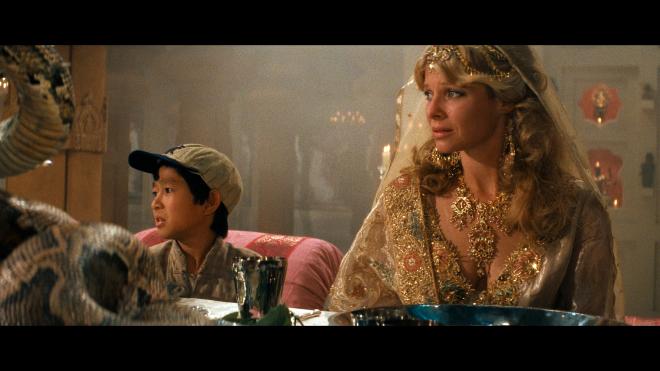 "Likewise, the sequel whips up a highly enjoyable Atmos track that's terrifically engaging with several unexpected surprises. Although it is still a front-heavy presentation, the design comes with some discrete effects that randomly and convincingly move into the surrounds and top heights, not only expanding the soundscape and generate an amusing half-dome ambiance. A few other atmospherics, like the echoing of voices, bats flying the air or debris from a mine shaft, pleasantly and quite satisfyingly move through the overheads without ever seeming exaggerated or forced. Also, Williams' score lightly bleeds into all the channels while the mid-range delivers precise clarity in the orchestration and clean, dynamic details in the several action sequences, generating an expansive and splendidly welcoming soundstage that's consistently active. Dialogue is pitch-perfect and very well-prioritized at all times, and the low-end is hearty with a robust, impactful punch in a couple of spots." (Audio Rating: 82/100) 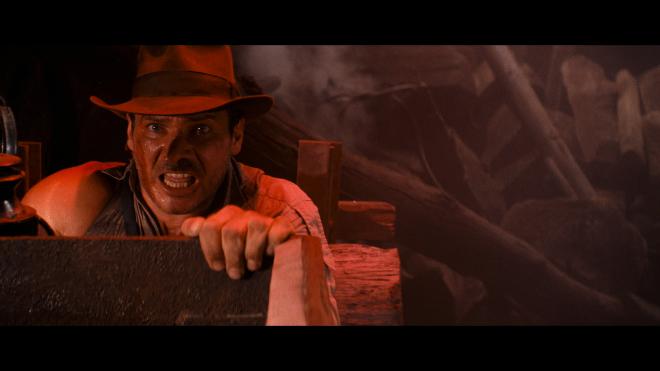 Because the complete series set had a dedicated bonus features disc, there aren’t any real extra features of any kind on this disc. Only trailers. 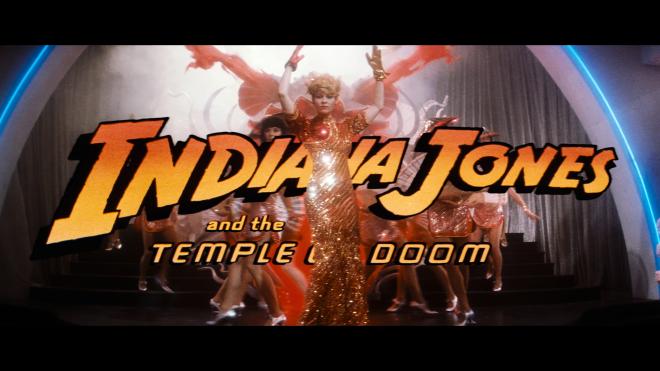 For me, Indiana Jones and the Temple of Doom ranks as the third best of the franchise (so far). I do enjoy it, I think it’s pretty good - but it’s also very flawed. And it’s not just because of Kate Capshaw. Spielberg just never feels comfortable with this material as he shifts tone from pitch black horror to goofball gags that undercut the tension. But, some great action sequences and a solid third act keep this film from completely falling apart. It is and always will be better than Kingdom of the Crystal Skull.

Now that this series has already been released on 4K Ultra HD Blu-ray, Paramount is giving this second film a solo outing with a new SteelBook release. Like Raiders of the Lost Ark, the case nicely replicates the original theatrical poster art from Drew Struzen but otherwise, the disc is exactly the same and without any bonus features. For those SteelBook collectors out there or folks who wanted to wait for solo releases, this is still a terrific disc for Temple of Doom that's well worth picking up -and now you’re getting better artwork! Sometimes it pays to wait. Fortune and glory... fortune and glory. Recommended