Some films simply can’t live up to their predecessors and suffer the judgment of unmet expectations. The Godfather: Part III lives on in that realm of disastrous mediocrity. Far from terrible, it lacks the greatness the franchise name commands and is more often better known for what it could have been rather than what it is. Offered with the Theatrical, 1991 Director’s Cut, and the recent Coda: The Death of Michael Corleone cut, Coppola gives fans a lot to chew over and debate as to which is the superior version. Now after a fresh restoration, this 4K Ultra HD Blu-ray presents an often stunning Dolby Vision transfer for each version with clean, effective audio tracks for all three versions.

Nearly sixteen years after the flawless sequel comes the most flawed film of the franchise The Godfather: Part III. Or, as Coppola wants to call it now - The Godfather Coda: The Death of Michael Corleone. This film was in development for ages with a variety of players attached at various moments in its genesis. Similar to another underwhelming trilogy capper - Alien 3 - there were a lot of different ideas on how to keep the series going and few of them were worth the effort. When this film finally came together it was rushed through production being written, filmed, and edited inside of a year to meet a mandated studio release date. On top of that, the best idea for the sequel wasn’t the one that made it to the screen.

When we left The Godfather: Part II, Michael was dealing with the fallout of his betrayals and strengthening his grip on the family organization, the death of his brother, his shattered marriage, and the tragic isolation that brought him. The Corleone family was in shambles. Not only that, but Duvall’s Tom Hagan had deftly segued from being the brilliant legal and strategic mind of the family’s criminal dealings to becoming a potential rival for the head of the family. And that’s the story Coppola and Puzo apparently actually wanted to tell - the war between two brothers. But with budget and time restrictions, Duvall skipped and was unceremoniously written out and replaced by the eternally tan George Hamilton, who was good, but the role of B.J. Harrison could have been played by anyone. 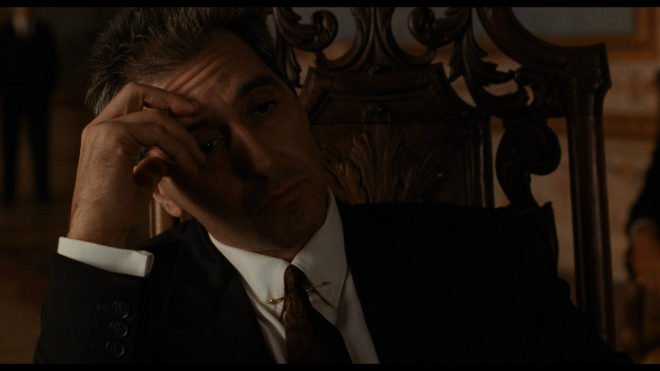 The story Puzo and Coppola chose to tell this outing isn’t bad or dull, it just feels very different from the previous films. There are a lot of good ideas working here. Michael is no longer the hardened family criminal mastermind and desperately wants to save his soul - and his children - from the legacy he’s created. The mob trying to get into the legitimate businesses of the Vatican played out against the backdrop of the tumultuous brief reign of Pope John Paul I is intriguing and points to bigger stakes for the Corleone family.

The problem for me with this film’s approach is so much story time has passed from Part II to Part III that it wastes the first third essentially reintroducing everyone. You remember Johnny Fontane from the first film right? Have us a song, Johnny! Do you remember Al Niri from Part II? Hi, Al! Do you remember Lucy Mancini, the bridesmaid Sonny was boffing in the first film? She’s here too and so is Sonny’s illegitimate son Vincent who everyone knows but also needs to be introduced to again because he’s the possible future of the franchise. Oh, and don't forget Enzo the baker and Calo the bodyguard! Then we have a completely wasted John Savage as the now-dead Tom Hagan's son Father Andrew Hagan who easily could have had a much richer part had there been time to develop his role. So much time is wasted with throwaway lines reintroducing so many characters that I feel if Coppola and Puzo had gotten the time they wanted to appropriately develop and craft their screenplay this wouldn’t be an issue. 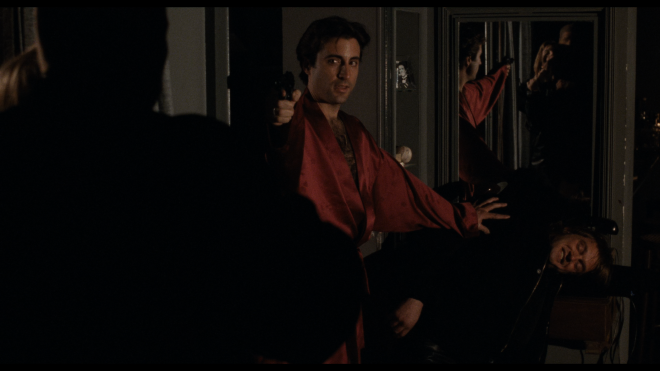 Now with Coppola’s new preferred cut Coda: The Death of Michael Corleone, The Godfather Part III does gain some semblance of redemption and actually fits a little better within the greater story established by the first two films. For starters, the editing is far less clunky. Before this review, I’d only ever seen the 1991 Director’s Cut and I always felt like the edits were uncomfortably abrupt as each scene just smashed into the next. With this new version, the rearrangement of specific scenes at the outset and some of the later segments in Sicily feel more organic and natural and actually has a richer dramatic flow. A little tighter editing around some of the more stilted line reads feels more even-handed and actually helps the weaker performances in the film.

I still won’t call this a great movie because from the outset it lacks the drive and passion of the first two films, but this new cut makes it better and certainly a more watchable and emotionally satisfying experience. Ultimately The Godfather: Part III - whichever cut - is a decent but sadly mediocre film. I don’t hate it and never have. It’s watchable and entertaining, but when I watch the first film I have to watch Part II soon after. I’ve never felt that driving need to watch Part III with any immediacy. It’s nice to know where the story ends, but it’s an ending I didn’t need to see to be satisfied with the first two films.

Vital Disc Stats: The 4K Ultra HD Blu-ray
The lesser sequel of this iconic franchise The Godfather: Part III arrives on 4K Ultra HD Blu-ray, currently exclusive to a five-disc trilogy 4K UHD + Blu-ray + Digital set. With all three cuts of the film, the recent Coda: The Death of Michael Corleone version gets its own BD-100 disc with the original Theatrical Cut and 1991 Director’s Cut sharing a BD-100 disc via seamless branching. As Coppola’s preferred cut, Coda: The Death of Michael Corleone gets its own single-disc digipak. The Theatrical Cut and 1991 Director’s Cut disc is housed in the two-disc Bonus Features digipak case. The Coda disc loads to a static image main menu with the iconic theme music playing and a standard navigation structure. The Theatrical/Director’s Cut disc loads to a static image main menu - when you hit “play” you can select which version of the film you want to see. Francis Ford Coppola’s Audio Commentary is only available for the Director’s Cut version of the film. 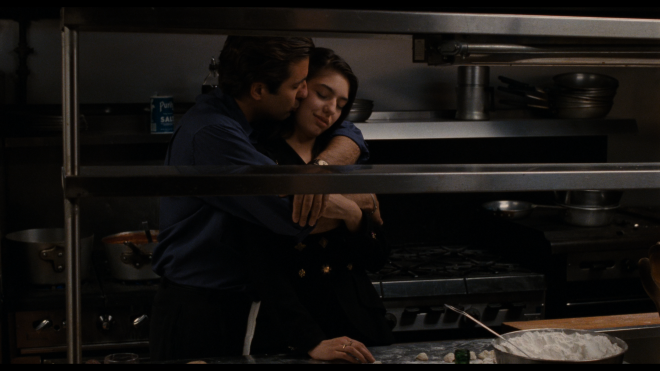 Now for The Godfather: Part III we have three cuts to look at. Thankfully when Coppola decided to go back and dig into this film for Coda: The Death of Michael Corleone, he didn’t shirk it and restored both the theatrical and 1991 Director’s Cut at the same time. All three films with their differences in run time and edits look fantastic. Because it’s just not a film I pull off the shelf but keep in the collection, I’d never really stopped and actually just looked at this movie. If you give it the time, it really is quite stunning and even more so now with this 4K Dolby Vision transfer.

The thing I really appreciated is how these restorations are a tribute to incredible makeup work. Vito’s aged appearance in the first film or Michael’s haggard appearance in this film stands up to scrutiny against the increased resolution. One of the unfortunate downsides with the 4K format is that often it can be a look behind the curtain. You can clearly spot dodgy special effects matting or even shoddy makeup work. Not for The Godfather films. If anything, the added details make you appreciate the work more because it’s so convincingly lifelike you’d swear a fifty-year-old Al Pacino was well into his late 60s with a variety of debilitating health conditions. Again, film grain is beautifully retained and natural to the film without looking smoothed out. Textures in clothing and the impressive production design details of the late 70s/early 80s New York to the lavish Vatican City to rustic locations of Sicily are on full display. 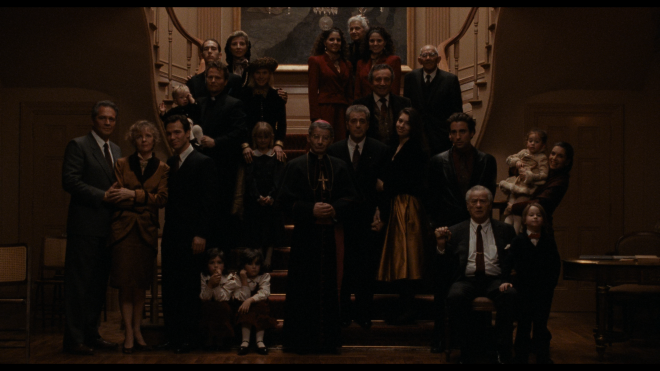 Like the first two films, the Dolby Vision HDR grade does what it’s supposed to do and delivers subtle refinements and improvements without altering the appearance with overly aggressive primaries. Black levels are again beautifully deep with that same level of shadow separation leading to some stunning three-dimensional depth to the image. When Michael is giving Kay the tour of Sicily it’s beautiful stuff! Whites are equally brilliant and crisp without blooming. The climax at the opera is a great example of how well-rendered black levels, shadows, limited light sources, and whites are handled. Again this is another damn near-perfect example of how a quality restoration should be handled. 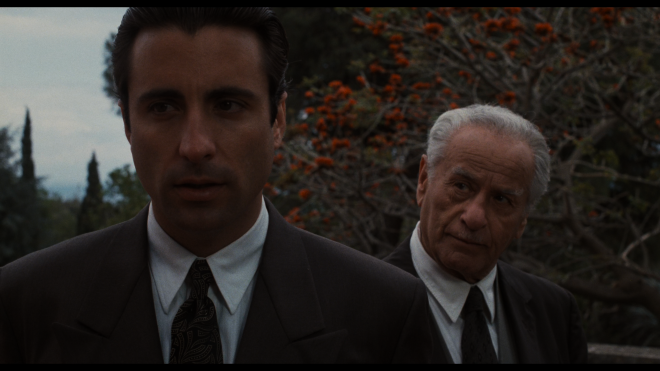 All three cuts of The Godfather: Part III rock a splendid Dolby TrueHD 5.1 track. No mono for this one because, well, there wasn’t one to begin with. And that’s okay because this is an all-around impressive track. Dialog for all three cuts remains clean and clear without issue. The soundscape is active and aggressive when and where necessary. I love how the film segues from that intense helicopter sequence to a dark stormy dramatic conversation in a kitchen with the iconic "... they pull me back in" line from Pacino. Scoring by Carmine Coppola comes through beautifully - and depending on which cut you’re watching - with some impressive dramatic flair. 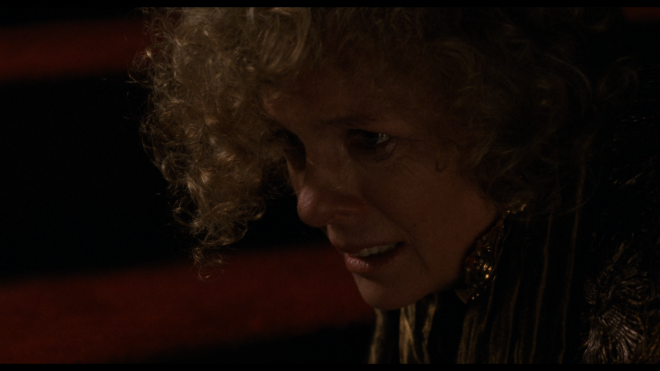 The main extras are found on the Bonus Features disc of the trilogy. We'll cover that material in our full trilogy write-up.
Audio Commentary with Francis Ford Coppola (for 1991 Director's Cut only) 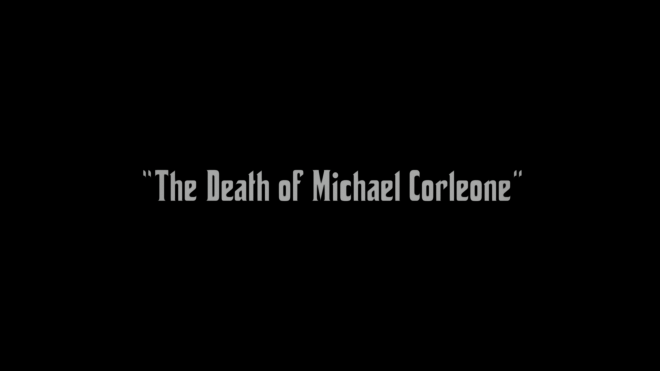 The Godfather: Part III is the often underappreciated and overly criticized climactic chapter of Al Pacino’s Michael Corleone. It’s not that the film is terrible or unwatchable, but compared to its predecessors, it’s sadly a mediocre finale with flashes of brilliant ideas that never quite come together. Now with all three cuts fully restored with beautiful 4K Ultra HD Dolby Vision transfers, fans can absorb and choose their favorite version. For me, the Coda: The Death of Michael Corleone version is the strongest with better pacing and tighter editing for a more fittingly tragic final bow - and it looks amazing!