The Godfather: Part II is the rarest of sequels that are not only as good as the first one but may even be the better film. Detailing the rise of Vito Corleone and the deterioration of his youngest son Michael, this generational crime saga is cinematic perfection. Al Pacino, Talia Shire, Diane Keaton, John Cazale, and Robert Duvall return to deliver their very best, but they’re overshadowed by a dynamic and chilling Oscar-winning performance from Robert De Niro. Now newly restored for 4K Ultra HD Blu-ray - the film looks better than ever with an impeccable demo-worthy Dolby Vision transfer with clean audio including the restored mono track.

The Godfather: Part II is a beast of a film. A sequel that is not only as good as the original but can be argued to be an even bigger, grander epic crime saga. Released just two short years after The Godfather, this sequel had a monumental task ahead of itself - how do you make a follow-up to one of the best films ever made? Well, the truth of it is, this film is both a prequel and a sequel. Returning to Mario Puzo’s original novel, the film opens with the early life of Vito Corleone that we didn’t see in the first film. As events of the past play out, the film flashes forward mere years after the events of the first film with the Corleone family living in Las Vegas and Michael desperately working to legitimize the Corleone name while strengthening their position in the criminal underworld for the safety and security of his family. 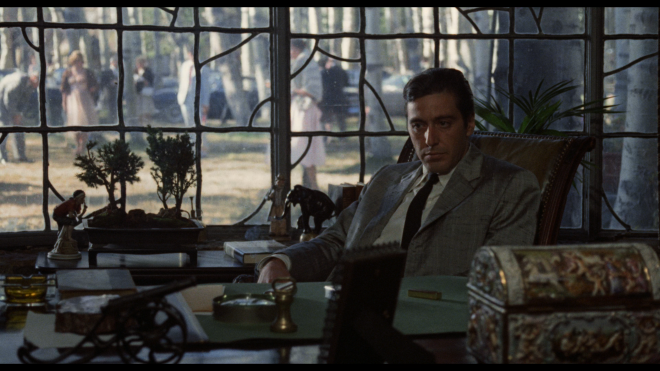 1974 was a hell of a year for Francis Ford Coppola. Not only did he manage to craft an incredible engrossing follow-up to one of the best films ever made, but he also crafted the tightly wound pitch-perfect thriller The Conversation starring Gene Hackman as a paranoid surveillance expert. Not only that - both films managed to pick up Best Director and Best Picture Oscar nominations for Coppola. But only one could win. While The Godfather came away with three major Oscars, it’s The Godfather: Part II that picked up the awards recognition the franchise would best be known for.

An amazing array of talent once again reteamed to bring this film together. Not only do we have Oscar-worthy turns from Pacino, Keaton, and Duvall, we also see the arrival of Robert De Niro in an Oscar-winning turn as the young Vito Corleone. However, as great as everyone is in this film, it’s John Cazale who always stands out for me. The Godfather franchise is often cited as the rise and fall of Michael Corleone specifically - but an equally important and perhaps more tragic character is Cazale’s Fredo. Maybe it’s also because Cazale only made five films in his sadly short life, but this round as Fredo guts me. The middle child, he represents inept potential. He never got that moment to shine. He failed to protect his father. He failed at casinos. He’s too meek to be Sonny and he’s not clever enough to be Michael. He desperately wants to leave his mark within the family but he’s always the one that needed to be taken care of. We never got to see Fredo achieve anything resembling greatness and we never got to fully appreciate Cazale’s full breadth of talent as an actor. With five incredible performances (in five Best Picture nominated films) - I feel this is Cazale’s best role and deserved far more recognition. 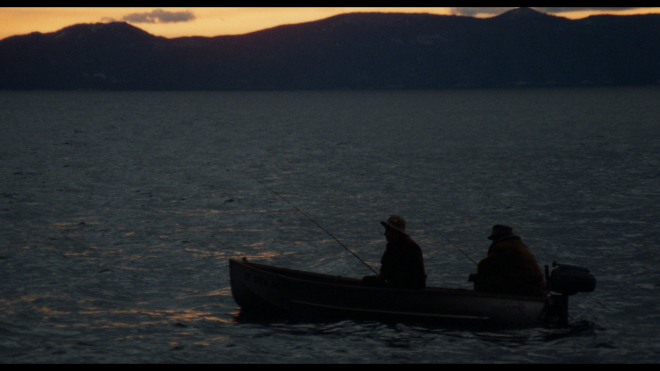 In the annals of sequel history, The Godfather: Part II somehow manages to be a monumental success. I’m someone who can’t jump into that debate of whether the first or the second film is better. They’re both incredible to me. They truly feel like one cinematic experience to the point that when they crafted The Godfather Saga cut for television editing the two films together chronologically, it was seamless. My lone complaint with this 4K release of the trilogy is we don’t get that multipart re-edit of the first two films. Regardless, it’s very difficult for me to watch The Godfather without jumping right into The Godfather: Part II. They’re one story.

Vital Disc Stats: The 4K Ultra HD Blu-ray
The mother of all sequels, The Godfather: Part II  finally arrives on 4K Ultra HD Blu-ray, currently exclusive to a full trilogy five-disc 4K UHD + Blu-ray + Digital set. The film is pressed on a Region Free BD-100 disc and is housed in a paper digipak alongside the three more digipaks for the first and third films and the bonus features disc. The disc loads to a static image main menu with the iconic theme music playing and a standard navigation structure. The only bonus feature on this disc is Francis Ford Coppola’s Audio Commentary. All other extras are found on the Bonus Features disc. 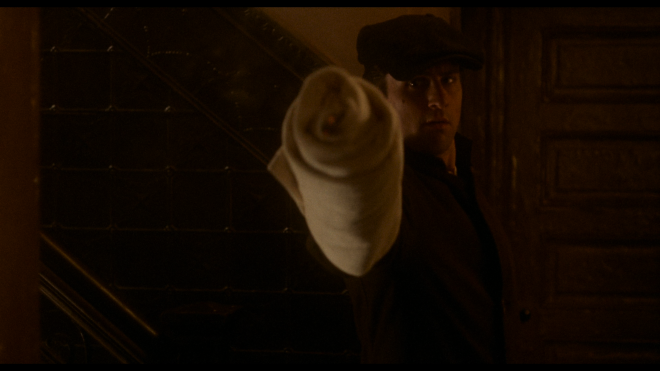 Like the first film, The Godfather: Part II comes to life with an equally stunning 4K Ultra HD Dolby Vision (and HDR10) transfer. Those first scenes in the early 1900s Sicily just make you sit there and say “wow!” - It’s genuinely incredible from frame one to that final iconic closing shot. Given the time period and where the story moves into the old streets of New York, courtrooms, and into the streets of 1950s Cuba, there are a lot of brightly lit sequences to fully appreciate the range of colors, details, and amazing production design that went into the making of this film. This film more than the others in the trilogy amazes me that Gordon Willis didn’t score an Oscar let alone a nomination for his cinematography.

As I said, details are amazing in this film and you can fully appreciate each and every frame from the moment little Vito steps off the boat at Ellis Island to the parade assassination of Fanucci to Michael’s confrontation with Fredo in Cuba. You can fully appreciate the texture in every garment, facial features, and some impeccable makeup work. Film grain is intact with a genuine true-to-source organically cinematic appearance. There are no overt signs of smoothing or notable uses of edge enhancement that I could see. 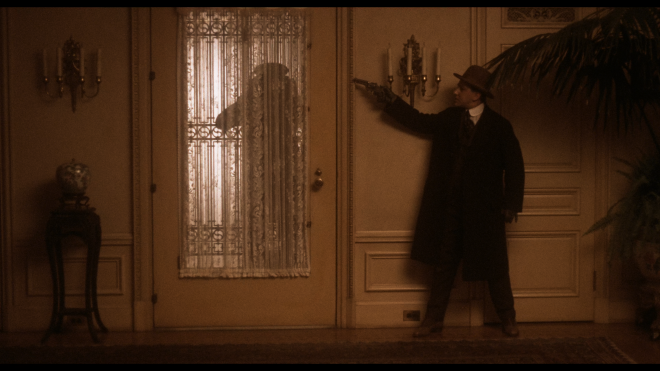 As with the first film, the Dolby Vision pass doesn’t work to radically alter the appearance of the film but preserve and enhance its best qualities. Primaries hold tight with brilliant reds and blues, and of course, yellows and oranges are still a prevailing color choice of the film. Black levels are again deep and true inky with amazing shadows. Like the first film that sense of three-dimensional depth really sets you back. Big party and crowd scenes really come to life. There are a lot of white suits in this film and they look brilliant and bold without any of the blooming issues of past releases. Again some nice specular highlights come to life as well. Granted, all three films in the trilogy look incredible and are demo-worthy examples, but I would lean on this one in particular as the showstopper of the set. 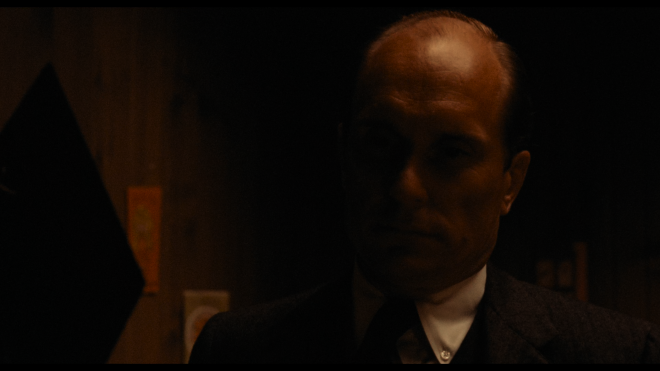 Like the first film, The Godfather: Part II comes with a pair of audio mixes to chose from. For the first time, you now get the restored lossy Dolby Digital mono track - which I’ve never been able to hear before so that was a real treat. It sounds great so if you’re a purist who wants that audio experience it’s available to you. But at the same time, I think I still prefer the 5.1 track. It could be that I’m just so used to that True HD mix now that it’s become what I prefer. The Fanucci assassination at the parade is such a great example of how they worked the track for surround sound or the big party in Cuba and the chaos as Michael tries to get off the island really works the soundscape nicely. Again both tracks are great so it’s awesome fans get to choose what’s best for their setups and personal tastes. 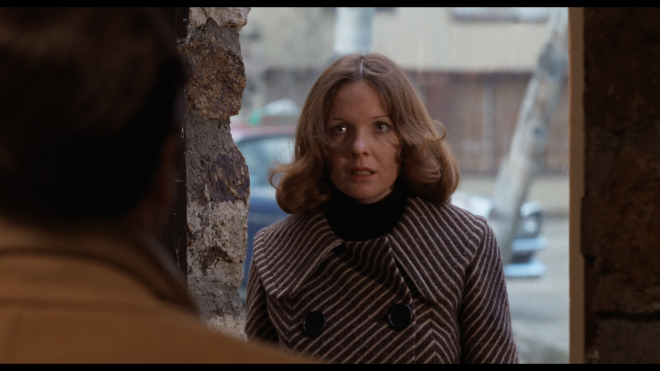 The main extras are found on the Bonus Features disc of the trilogy. We'll cover that material in our full trilogy write-up. 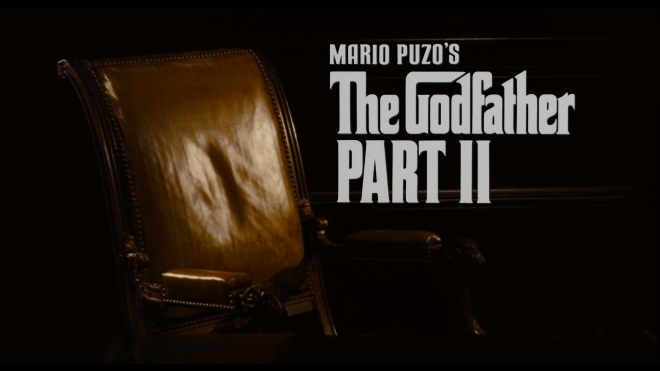 The Godfather: Part II achieved the impossible - a sequel that lives up to and even exceeds the original in many ways. The returning cast is in peak form with Al Pacino and Robert De Niro playing juxtaposed heads of the Corleone family. We see the missing pieces of Puzo’s original novel alongside the next chapter of Michael’s journey as the head of organized crime. This beautifully poetic and intricately told story is an essential piece in the Corleone saga. Thanks to Paramount, Coppola, and their incredible restoration team, this film also looks better than we’ve ever seen it on home video and an impeccable 4K Ultra HD Blu-ray with Dolby Vision HDR transfer. Currently only available with the Trilogy box set, this is true format demo material you’ll want to watch again and again. Because this film is only available in a trilogy box set, I'm forgoing the standard "recommended" portion here and saving it for the full collection write-up.