This offering might be refused by many Godfather fans, but if you've got a few extra bucks lying around and revere this iconic film franchise, picking up The Godfather Trilogy - 4K Ultra HD Blu-ray Limited Collector's Edition is well worth it. This elegant keepsake box set contains all the same discs as its lower-priced, more utilitarian counterpart, but adds a hardcover commemorative photo book and three portrait art prints on archival paper. It's the ultimate Godfather package for the ultimate fan.

Note: This review only examines the packaging and contents of the Limited Collector's Edition. For complete reviews of all the Godfather films, video and audio quality, and supplements, please see our coverage of The Godfather Trilogy - 4K Ultra HD Blu-ray.

I couldn't resist. While browsing Amazon's website several weeks ago, I noticed a big pre-release price drop for The Godfather Trilogy - 4K Ultra HD Blu-ray Limited Collector's Edition. I had no previous intention of purchasing this elegant yet imposing keepsake, despite the lure of its contents, but for $106.99 - just $20 less than the barebones edition was selling for at the time, and a whopping $61 off the Collector's Edition retail price - I said what the hell and emulated so many of the Corleones by pulling the proverbial trigger.

Well, the set has arrived, and I don't regret my decision. Yes, the Collector's Edition is big and bulky, measuring 10-1/2" wide x 12-1/2" long x 1-1/2" deep and weighing about three pounds, but there's a gravitas to the sleek, jet-black, book-like case with embossed gold lettering that beautifully evokes the dark, violent themes each film in the trilogy explores. You pick it up and it just feels like a celebratory anniversary edition that one of the most important franchises in film history deserves. 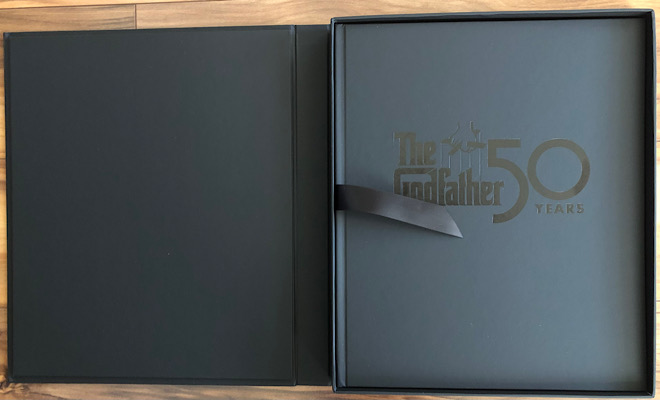 Open the front flap and a leaflet with digital codes for all three movies lies atop the 36-page hardcover commemorative picture book that also houses all five discs (four 4K UHD discs and one Blu-ray). An introduction by director Francis Ford Coppola precedes sections on all three films, with color and black-and-white photos, scene stills and production shots, pictures of deleted scenes, director notations and storyboards, and credit listings all printed on glossy pages. All the photos are captioned, but there's no narrative text, no contextual analysis of the movies. It's just a photo book, but what a beautiful photo book it is. 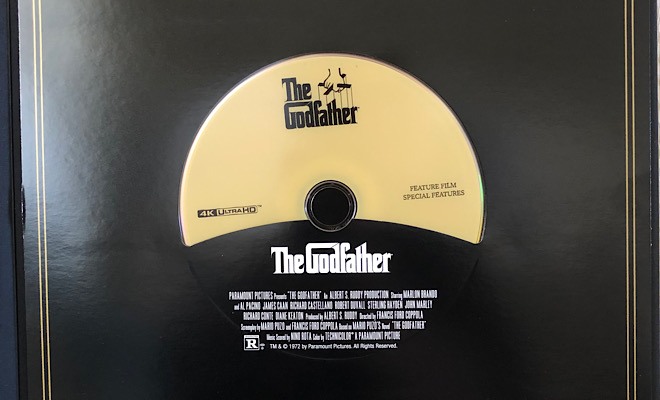 My one gripe with this set is the way the discs are packaged. I'd prefer not to handle the book every time I want to access the discs, and I've never been a fan of the pouches, which make it difficult to remove the discs without over-handling them as well. There's a lip at the top of each pouch that supposedly holds the discs in place - I say "supposedly," because two of the discs in my set dislodged during shipping - but the lip also makes the discs harder to remove. This is a personal peeve of mine and isn't a huge deal, nor should it deter anyone from purchasing this set, but I felt duty-bound to mention it. 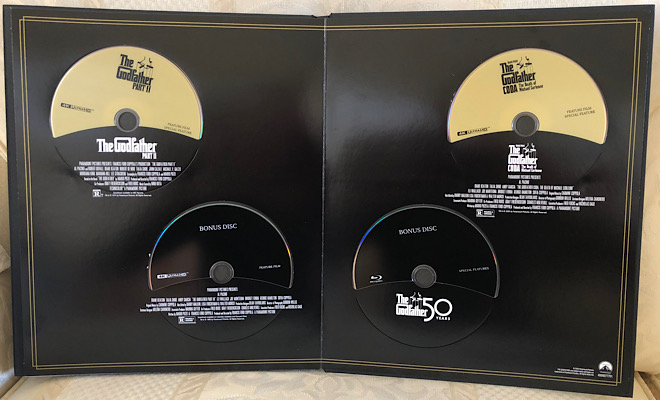 Beneath the book and separated by a piece of protective paper are three color sketches of Marlon Brando, Robert De Niro, and Al Pacino as their respective Corleone characters. The portraits, which are printed on heavy archival paper that feels slightly thicker than card stock, actually look much more attractive in person than on the web. A classier alternative to 8x10 glossies of the actors, these portraits capture character instead of Hollywood glamor and nicely cap off this understated yet quite lovely collector's edition. 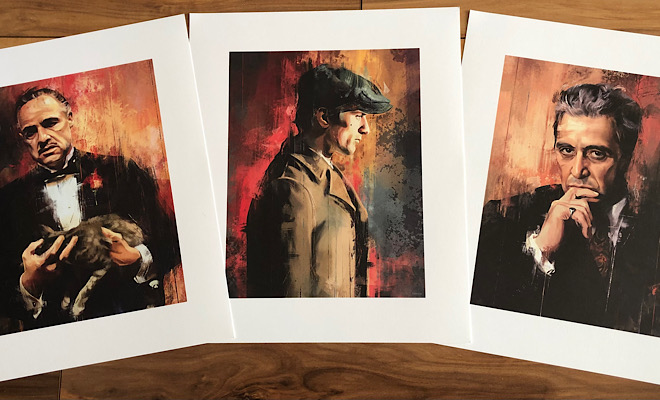 Is The Godfather Trilogy - 4K Ultra HD Blu-ray Collector's Edition worth the list price of $167.99? Definitely not. A lot more swag and some exclusive video material would have to be included to merit paying that hefty tariff. Keep your eyes peeled, though, for a sale, because if the price drops to the $100 range, I'd recommend pulling the trigger. Not every movie or franchise deserves a swanky collector's edition like this, but The Godfather does, and as the years tick by, looking at this handsome box on your shelf just might give you the warm fuzzies and a nostalgic pang for one of the best movie trilogies of all time.

Vital Disc Stats: The 4K Ultra HD Blu-ray
Just like its general release counterpart, The Godfather Trilogy - 4K Ultra HD Limited Collector's Edition is a five-disc set. Each Godfather film gets its own BD-100 disc with The Godfather: Part III getting an extra BD-100 disc for the original Theatrical Cut and 1991 Director's Cut. The bulk of the bonus features are presented on a BD-50 Blu-ray disc. None of the films are offered in 1080p in this set. Also included is a digital copy slip with three codes, one for each film. Being a Paramount release, the codes are not Movies Anywhere compatible and can only be redeemed at VUDU or iTunes.

For 4K UHD video reviews of all the Godfather films in this collection, click here.

For audio reviews of all the Godfather films in this collection, click here.

For supplement reviews of all the Godfather films in this collection, click here. 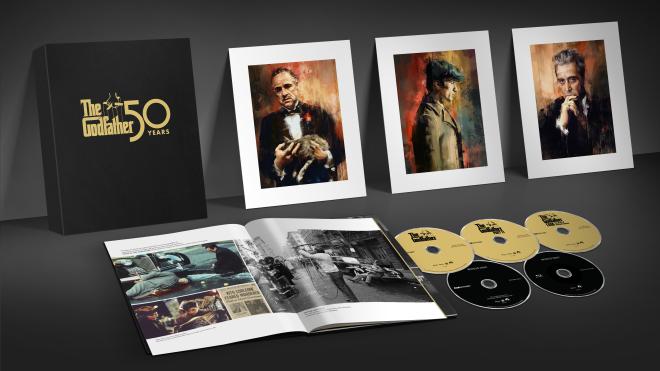 If you're a diehard fan of The Godfather franchise, treat yourself to the 50th anniversary 4K Ultra HD Limited Collector's Edition. Don't pay the retail $167.99 price tag, but if this simple, sleek, elegant set goes on sale for 30% or 40% off, consider it an offer you can't refuse. Movies as substantive as The Godfather films deserve a swanky collector's set, and this one beautifully reflects the artistry that defines them. For Fans Only.