Find your mask, cape, and practice slicing your Z's - The Mask of Zorro is coming to 4K Ultra HD Blu-ray May 5th 2020 sourced from a new 4K restoration in HDR (probably only HDR10), with a new Dolby Atmos audio track AND with some new UHD exclusive bonus features! This isn't ready for pre-orders yet, but keep an eye out on our listing for updates here

Check out the full press release below. 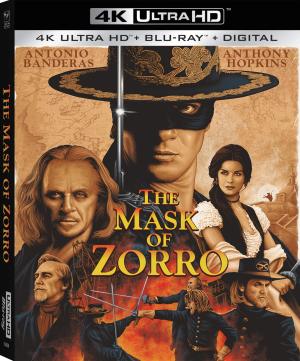 When a power-crazed despot schemes to buy California from Mexico, it takes two Zorros--the legendary Don Diego de la Vega (Anthony Hopkins) and his chosen successor Alejandro Murrieta (Antonio Banderas), a dashing bandit-turned-hero-- to defeat the tyrant's unscrupulous plans. But can even their combined skills, bravado and derring-do be enough to achieve de la Vega's ultimate goal: revenge against the man who killed his wife, kidnapped his daughter and held him prisoner for twenty years?BONUS MATERIALS

Discs mentioned in this article: (Click for specs and reviews)
The Mask of Zorro - 4K Ultra HD Blu-ray (Ultra HD)