Starring Antonio Banderas, Anthony Hopkins and Catherine Zeta-Jones, Martin Campbell's The Mask of Zorro remains a wildly entertaining swashbuckler providing the excitement and sweeping romance expected of the serial. The movie swings to Ultra HD with a stunning 4K video presentation and a highly-satisfying Dolby Atmos soundtrack. With a pair of new extras, the overall package makes for a Highly Recommended addition to the UHD library.

In Martin Campbell's swashbuckling adventure The Mask of Zorro, Antonio Banderas turns up the charm and panache as the legendary California hero of the classic serial novels by Johnston McCulley. Caught in several death-defying acts and narrowly escaping some really tights scrapes, his Robin Hood-esque heart-throb is continuously dashing and comical all at once while joined by another smooth-tongued sophisticate in award-winner Anthony Hopkins as the original cape-crusader. And this is where some of the fun in the script begins, revealing a few clever conceits and allusions within the narrative.

Hopkins portrays the aging hero in black Don Diego de la Vega with a refined and distinguished attitude harkening back to the classic performances of Douglas Fairbanks and Tyrone Power — pencil mustache and all. Meanwhile, Banderas is an outlaw named Alejandro, which happens to be the same name as Diego's father in McCulley's series and whose brother is Joaquin Murrieta — the real-life bandit known as the "Mexican Robin Hood" and possible inspiration for the Zorro character. Hopkins later takes on the position of Bernardo, Don Diego's mute servant in the original stories as a slight witty nod for fans. 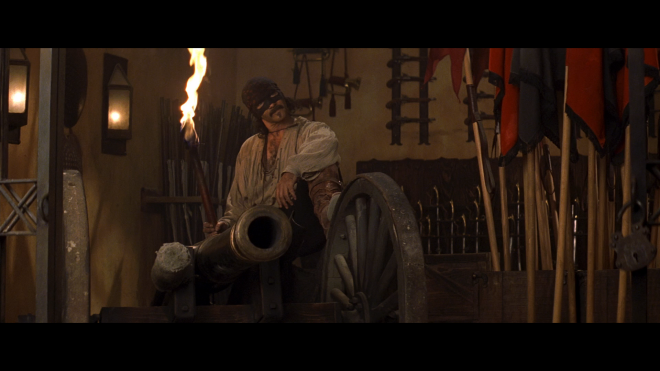 Opposing them is the sinister, conniving rapscallion Don Rafael Montero (Stuart Wilson), the man responsible for murdering Don Diego's wife and kidnapping their baby daughter, Elena, twenty years earlier. That little girl grows up to be the always dazzling and impeccable Catherine Zeta-Jones, acting the delicate and genteel type but on a turn, proving herself equal to the boys, both in politics and with a sword. In all this, Campbell admirably keeps the excitement levels high, nicely balancing the cartoonish comedy with the thrilling action. A sensationally fun popcorn actioner, the swashbuckling adventure makes for an excellent addition to the original pulp series, the Zorro mythos and its many film adaptations.

For a more in-depth take on the movie, you can read our review of the 2009 Blu-ray HERE.

Sony Pictures Home Entertainment brings Martin Campbell's The Mask of Zorro to Ultra HD Blu-ray as a two-disc combo pack with a flyer for a Digital Copy, which can be redeemed via sonypictures.com and Movies Anywhere. When redeeming said code, users have access to the 4K HDR10 version with Dolby Digital audio on some platforms while others only offer the HD SDR version. The UHD digital edition with Dolby Vision and Dolby Atmos is available for purchase separately. The dual-layered UHD66 disc sits comfortably opposite a Region Free, BD50 disc inside a black, eco-elite vortex case with a glossy slipcover. At startup, the disc goes straight to a menu screen with the usual options along the bottom, music playing in the background and clickable windows on the left.

Coming from a brand-new remaster and reported restoration of the original 35mm camera negatives, the native 4K transfer is easily a massive improvement over its Blu-ray predecessor. Immediately apparent is the razor-sharp detailing in practically every dialogue-driven scene and action sequence. From the individual hairs and whiskers and the fine stitching of the costumes to the smaller features in the stage production and in the surrounding foliage, the 2160p picture is quite stunning to behold. Granted, there are a couple slightly softer moments sprinkled throughout and very brief instances of minor ringing during the final climactic battle, but these small issues appear to be inherent to the source and the result of the photography. With an ultra-fine layer of natural grain bathing the entire movie, the 2.40:1 image has an attractive cinematic appeal that's quite mesmerizing.

The 4K video also boasts a strikingly attractive boost in overall contrast and brightness, showering the swashbuckling stunts and melodrama in velvety rich blacks without sacrificing the finer details in the deepest, darkest shadows. Whites are also notably brighter and more intense. Meanwhile, crisp, dazzling specular highlights add an appreciable energetic pop to every scene, such as the radiant sparkle in buttons and medals, the luminous fluffy clouds in the sky and the sharper details within the hottest spots like the climactic explosion or the blaring sun through the window at around the 85-minute mark. Likewise, the HDR10 presentation jumps into action with an enhanced and varied selection of colors. The primaries are not only fuller and richer, but secondary hues are more vivid and captivating, providing better and more natural-looking skin tones in the entire cast. (Video Rating: 94/100)

Swashbuckling adventures swing into action with a boisterously charming and highly satisfying Dolby Atmos soundtrack. While not necessarily offering a leaps and bounds jump over its DTS-HD predecessor, the additional channels nonetheless add a welcomed layer of immersion that makes this audio option a clear winner. Vocals are continuously precise and intelligible amid the loudest, most chaotic segments while the higher-frequencies are broad and sharply rendered without a loss in detail. A vigorous, robust low-end delivers a wall-rattling, room-energizing presence, effectively providing serious weight and a powerful oomph to the music and the explosive action.

Imaging feels vast and expansive with various sound effects smoothly traveling across the front speakers and into the top heights with convincing effectiveness, creating a splendidly engaging and encompassing half-dome soundstage. James Horner's score joins the fun, extending into the ceiling channels with a great deal of warmth and detailed clarity, exhibiting excellent fidelity and definition within the mid-range. As expected, the action sequences deliver the best enveloping moments with the chaos of debris panning in every direction and the cheers or screams of people coming from all around. Quieter, dialogue-driven sequences fill the room with birds chirping in the distance, the noise of a crowded party surrounding the listening area and the echo of water dripping from Zorro's cave lair, generating an immersive hemispheric soundfield. (Dolby Atmos Audio Rating: 90/100)

For this UHD edition, Sony Pictures ports over the same set of features on the accompanying Blu-ray disc and adds a pair of new surprises exclusive to the 4K disc.

The legendary masked vigilante of the wild west rides again for another swashbuckling adventure in Martin Campbell's The Mask of Zorro. Starring Antonio Banderas, Anthony Hopkins and Catherine Zeta-Jones, the blockbuster is loads of fun, providing the excitement and sweeping romance expected of the serial. Twenty years later, the movie continues to entertain on Ultra HD with a gorgeous, near-reference HDR10 presentation and a boisterously fun Dolby Atmos soundtrack, giving fans a notable and highly satisfying upgrade over its Blu-ray counterpart. With a pair of new extras on the 4K disc, the overall package makes for a highly recommended addition to the UHD library.