Originally set to release in theaters in July 2020, Wes Anderson's latest tribute to inventively whimsical filmmaking and the power of the press - The French Dispatch was pushed back over a year thanks to the ongoing COVID pandemic. Now after a respectable theatrical outing, you'll be able to bring it home to Blu-ray in a single disc Blu-ray + Digital set as a bonus Christmas gift to yourself on December 28th, 2021. 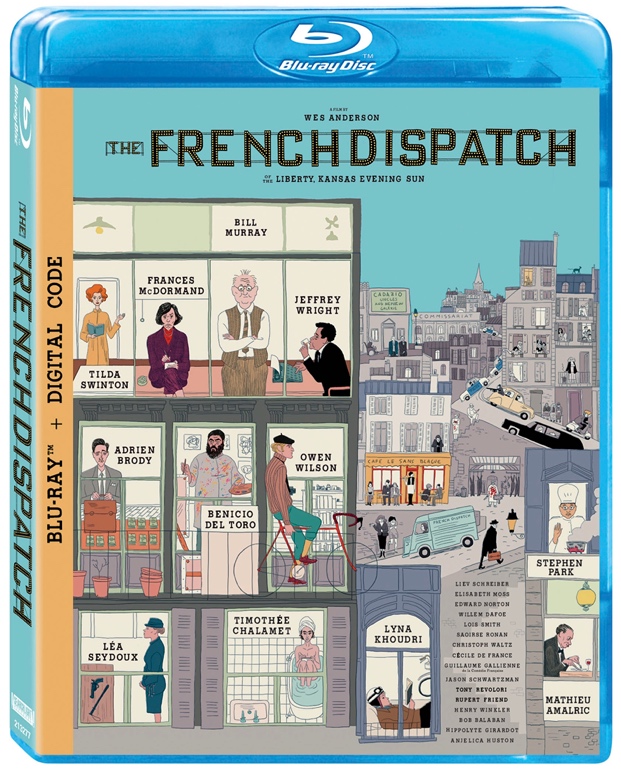 Now for those hoping for the first Wes Anderson film to come to 4K Ultra HD Blu-ray, well, we'll just have to wait and see what the very likely Criterion Collection release will bring us. The press release was pretty barebones, just a synopsis, cast breakdown, and your basic tech specs - this one will hit with DTS-HD MA 5.1 audio. No mention of any bonus features. But again, that's par for the course with Wes Anderson Blu-ray releases. Ever since The Fantastic Mr. Fox, there's been a basic studio-released near-barebones release and then eventually followed by a much more elaborate and interesting Criterion Collection release. So if you're a super Wes Anderson fan you should be used to picking up each release at least twice - more if you've ever upgraded from DVD.

“A LOVELY VALENTINE TO THE ADVENTUROUS EDITORS OF SOPHISTICATED LITERARY MAGAZINES, BURSTING AT THE SEAMS WITH HAND-CRAFTED VISUAL DELIGHTS. AUDIENCES WILL MARVEL AT ITS RICHLY IMAGINED WORLD.”

and Blu-ray™ and DVD on December 28

LOS ANGELES, CA (November 9, 2021) – Academy Award® nominee* and visionary filmmaker Wes Anderson presents his 10th film, The French Dispatch. An homage to literary journalism, French culture and classic cinema the film is praised by critics and audiences alike for its exquisite visuals, captivating performances and unique artistry. Add The French Dispatch to your collection on Digital December 14 and on Blu-ray and DVD December 28.

* Best Picture Nominee for The Grand Budapest Hotel in 2014

Mathieu Amalric as The Comissaire

Edward Norton as The Chauffeur

*Rated R for graphic nudity, some sexual references and language.

Discs mentioned in this article: (Click for specs and reviews)
The French Dispatch (Blu-ray)