The 1992 action sci-fi starring Jean-Claude Van Damme and Dolph Lundgren is headed for a 4K release in Europe.

StudioCanal is preparing Universal Soldier for 4K Ultra HD Blu-ray in Europe on November 4. No word yet on a U.S. release.

A team of elite soldiers are used by the government to fight terrorism. With exceptional physical capabilities, they seem to be the perfect soldiers. But behind their existence there is a secret; they are not human, but fighting machines, created from the bodies of soldiers killed in the Vietnam war through the wonders of advanced genetic engineering. But things begin to go wrong when two of the soldiers, Luc Devreux [Jean-Claude Van Damme] and Andrew Scott [Dolph Lundgren] begin to regain their memory - and a violent feud that should have died years ago is reborn.

Specs and supplements include:

You can find the latest specs for Universal Soldier - 4K Ultra HD Blu-ray (UK) linked from our 4K Blu-ray Release Schedule, where it is indexed under November 4. 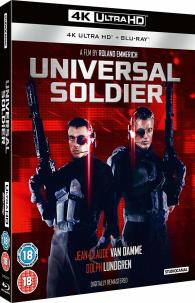