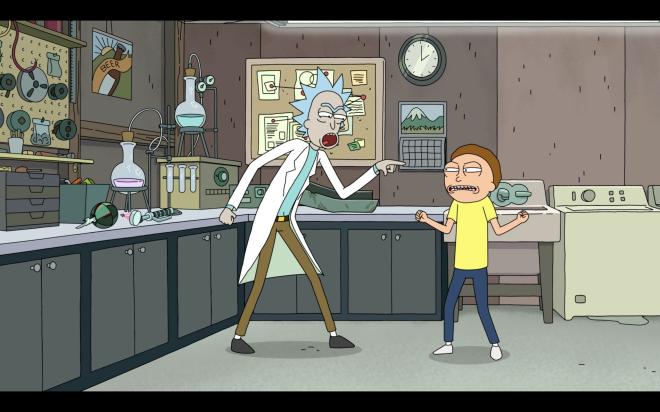 With Rick and Morty Season 5 arriving maybe possibly (who knows really) sometime in 2021 - Warner Brothers collects the previous seasons into one nice convenient box set. This has been their habit throughout the series' run thus far so this isn't too surprising a release. They did a Season 1 & 2 box ser, a Season 1 & 3 box set - and I'm sure eventually after Season 5 arrives - there will be a box set for that too. If you've been on the fence picking the series up, it's still damn funny.

Season 4 wasn't peak material in my book, but it was still pretty damn funny. Those last few episodes saved what was starting out to be a pretty mediocre season. And in case you're worried about extra features or anything like that, these sets are merely collecting the already available discs so nothing new in that regard.

As of this writing, Rick and Morty: The Complete Seasons 1-4 is not yet available for pre-order but should be soon. When it's up we'll update the listing.

Adult Swim’s Two-Time Emmy® Award Winning Series
Brings Home All the Antics
Rick and Morty: Seasons 1-4
Own the Out-of-this-World Box Set on Blu-ray™ & DVD
March 2, 2021 from Warner Bros. Home Entertainment
BURBANK, CA (January 12, 2021) Wubba-lubba-dub-dub! From creators Justin Roiland (“Adventure Time”) and Dan Harmon (“Community”), go on an intergalactic journey across the multi-verse with the release of Rick and Morty: Seasons 1-4 boxed set from Warner Bros. Home Entertainment on March 2, 2021.  Get ready to binge on one of cables #1 watched comedies - and follow the misadventures of America’s favorite crazy scientist and his grandchildren with this outrageous boxed set which includes all 41 episodes from the first four seasons of the award-winning series, along with copious special features, including audio commentary, deleted scenes, “Inside the Episode” segments, numerous featurettes, past animatic sketches, and more. For a limited time, fans who purchase the set will receive an exclusive poster from the series. Rick and Morty: Seasons 1-4 is priced to own at $79.99 SRP for the DVD ($89.99 in Canada) and $89.99 SRP for the Blu-ray ($99.99 in Canada), which includes a Digital Copy (U.S. only). Rick and Morty also available to own on Digital via purchase from digital retailers.
After having been missing for nearly 20 years, Rick Sanchez suddenly arrives at daughter Beth's doorstep to move in with her and her family. Although Beth welcomes Rick into her home, her husband, Jerry, isn't as happy about the family reunion. Jerry is concerned about Rick, a sociopathic scientist, using the garage as his personal laboratory. In the lab, Rick works on a number of sci-fi gadgets, some of which could be considered dangerous. But that's not all Rick does that concerns Jerry. He also goes on adventures across the universe that often involve his children, Morty and Summer.
With Blu-ray’s unsurpassed picture and sound, Rick and Morty: Season 1-4 Blu-ray release will include 1080p Full HD Video with DTS-HD Master Audio for English 5.1. Featuring all 41 episodes from the season 1-4 in high definition, as well as a digital code of the seasons (available in the U.S. only).
DIGITAL
Rick and Morty is available to own on Digital. Digital allows consumers to instantly stream and download all episodes to watch anywhere and anytime on their favorite devices. Digital is available from various retailers including iTunes, Amazon Video, Google Play, Vudu, PlayStation, Xbox and others. A Digital Code is also included in the U.S. with the purchase of specially marked Blu-ray discs for redemption and cloud storage.
BONUS FEATURES
Season 1
Season 2
Season 3
Season 4
41 (22 Minute) EPISODES
Season 1
Season 2
Season 3
Season 4
BASICS
DVD Release Date: March 2, 2021
Presented in 16x9 widescreen format
Total Runtime: Approx. 919
8 DVD-9 / 4 BD-50
Audio – English (5.1)
Subtitles – English SDH
Rated: TV-MA
DVD Price: $79.99 SRP ($89.99 in Canada)
Blu-ray Price: $89.99 SRP ($99.99 in Canada)
Share This article
Bringing you the best reviews of 4K and high definition entertainment.
Get Social with HDD
Like
Subscribe
Follow
Subscribe
< Previous Article
Next Article >
Top News Stories