Warner Bros. Entertainment Inc has revealed that it is releasing Willy Wonka & The Chocolate Factory on 4K disc on June 29th.

The 1971 film directed by Mel Stuart and starring Gene Wilder and Peter Ostrum spawned a candy franchise and a remake in 2005, among other things. 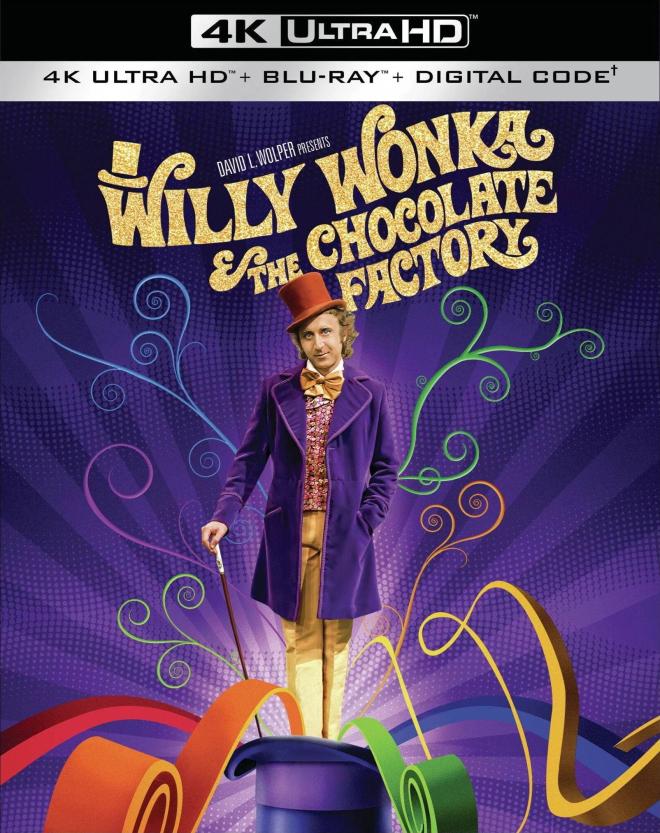 CELEBRATING ITS 50TH ANNIVERSARY, THE BELOVED FILM WILL BE AVAILABLE FOR THE FIRST TIME IN 4K RESOLUTION WITH HIGH DYNAMIC RANGE (HDR)

Own it June 29 on 4K Ultra HD and Digital

BURBANK, CA, May 3, 2021 – Warner Bros. Home Entertainment announced today that the perennial family classic Willy Wonka & The Chocolate Factory will be released on Ultra HD Blu-ray Combo Pack and Digital on June 29. Called a “genuine work of imagination” by Roger Ebert, the film stars Gene Wilder in one of his most famous roles.

Willy Wonka & The Chocolate Factory will be available on Ultra HD Blu-ray Combo Pack for $24.99 ERP and includes an Ultra HD Blu-ray disc with the feature film in 4K with HDR and a Blu-ray disc with the feature film and special features. Fans can also own Willy Wonka & The Chocolate Factory in 4K Ultra HD via purchase from select digital retailers beginning on June 29.

Directed by Mel Stuart and starring Gene Wilder as the legendary Candy Man Willy Wonka, this splendiferous movie brings to the screen the endlessly appetizing delights of Roald Dahl’s cherished book. Coated with flavorful tunes and production designs that are a visual treat for the eyes, this effervescent musical never fails to enchant young and old. On a whirlwind tour of Willy’s incredible, edible realm of chocolate waterfalls, elfish Oompa-Loompas and industrial-sized confections, a boy named Charlie (Peter Ostrum) will discover the sweetest secret of all: a generous, loving heart. And viewers will rediscover all the timeless magic as it was meant to be seen.

On 6/29/2021, Willy Wonka & The Chocolate Factory 4K UHD will be available to own for streaming and download to watch anywhere in high definition and standard definition on favorite devices from select digital retailers including GooglePlay, Vudu, Xbox and others, and will be made available digitally on Video On Demand services from cable and satellite providers, and on select gaming consoles.

*Digital movies or TV episodes allow fans to watch a digital version of their movie or TV show anywhere, on their favorite devices. Digital movies or TV episodes are included with the purchase of specially marked Blu-ray discs. With digital, consumers are able to instantly stream and download movies and TV shows to TVs, computers, tablets and smartphones through retail services like CinemaNow, Flixster Video, Vudu and more. For more information on compatible devices and services go to wb.com/digitalmoviefaq. Consult a digital retailer for details and requirements and for a list of digital-compatible devices.

Warner Bros. Home Entertainment (WBHE) brings together Warner Bros. Entertainment's home video, digital distribution and interactive entertainment businesses in order to maximize current and next-generation distribution scenarios. An industry leader since its inception, WBHE oversees the global distribution of content through packaged goods (Blu-ray Disc™ and DVD) and digital media in the form of electronic sell-through and video-on-demand via cable, satellite, online and mobile channels, and is a significant developer and publisher for console and online video game titles worldwide. WBHE distributes its product through third party retail partners and licensees.