Windows, Mac, and Linux versions included for one purchase.

'Sid Meier's Civilization: Beyond Earth' arrives this Friday, but that's for Windows. The series has traditionally had a strong presence on the Mac platform, and that has been due in part to the work of Aspyr Media. Aspyr Media has previously brought 'Civ III,' Civ IV,' and 'Civ V' to the Mac, and now will bring over 'Sid Meier's Civilization: Beyond Earth.' Likewise, Aspyr previously brought 'Civ V' to Linux, and will follow suit with the new game. The Mac and Linux version are described as coming this holiday period, which sounds a lot like in the next six weeks. These versions not only will sport the same features as the Windows version but will even support cross-platform multiplayer through Steam.

The Mac and Linus versions of the game are available to pre-order directly through Aspyr's GameAgent for only $49.99. (Mac & Linux) There will not be any pre-load option for the game, but pre-orders will include the Exoplanets map pack for free. In addition, GameAgent is offering members (old and new, membership is free) 25% off the price.

Even better, those who purchase any version of the game, whether it be Windows, Mac, or Linux, will nab all three versions via Steam Play. Steam Workshop support is planned for the game but may not make the Mac or Linux launches. The game will be available on the Mac App store, but that version will not support online multiplayer (though that may change), and for that reason, the Steam version is recommended.

The game will support cross-save through the different platforms, but saves will not transfer via Steam Cloud. Since the three versions will recieve updates at varying times, cross-save and cross-platform multiplayer may not always work. Saves need to be moved manually.

You can find the latest info on 'Sid Meier's Civilization: Beyond Earth' linked from our Video Game Release Schedule. 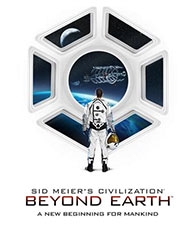