Game Streaming has taken on a huge role recently, and general what is means is to watching someone play a game, on say Twitch. But there has been another kind of streaming in play. Steam allows players to play a game running on one PC from another PC. The Nvidia Shield uses similar tech to allow play on the small Android device over WiFi from PCs. The PlayStation Vita can play game that are running on the PS4. Even the Wii U, in its own way, allows for offscreen play (off TV and on the GamePad).

What's missing in this list has been Microsoft and Xbox. Though SmartGlass has allowed for a second screen experience, what Microsoft has revealed today is whole another level of function. In Windows 10 there will be a Xbox App, and through that app, players can play games on their PCs that are actually running on their local Xbox One consoles. 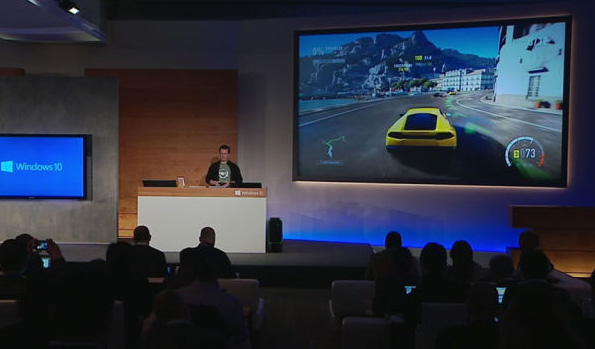 'Fable Legends,' which was revealed as coming to both the Xbox One and PCs was demonstrated as a game where PC players can play with Xbox One players.

The Xbox App. Whether you only game on the PC, the console or both, the Xbox app brings together the most important aspects of your gaming life: Games, Friends, Messages, Activity Feed, your gaming legacy with Achievements, and much more.

Here is a rundown on the Xbox App and other game related features, such as DirectX 12 (via Xbox Wire):

Xbox Live and multiplayer across devices. Xbox Live is social, interactive, and seamlessly integrated directly into Windows 10, bringing gamers the experiences they love across devices, like multiplayer gaming on Windows 10 against players on an Xbox One, and messaging and chat with friends. And developers will get full access to the Xbox Live API, making it easier to create more powerful gaming scenarios across devices.

Game Streaming. Thanks to the deep integration of Xbox on Windows 10, games on Xbox One can be streamed through your home network to your Windows 10 PC or tablet, anywhere in your house. Xbox One gamers will now be able to play many of their favorite console games on their PC. And many Xbox One accessories will work interchangeably on the console and PC (with more on the way), so you can customize your experience in whatever way you see fit.

DirectX 12. We’ve enhanced our graphics technology to squeeze every ounce of performance out of your supported hardware and open up a new wave of innovation for high-end graphics. Delivering greater complexity and detail on your current PC, games authored or updated for DirectX 12 are able to run faster and have richer visuals. And this technology is already in the hands of developers today. The engines used to power hundreds of games are implementing DirectX 12, including Unreal Engine 4 from Epic and, as we announced today, Unity.

Game DVR. On Xbox One, one of the most popular features used by gamers is Game DVR, which gives simple access to recording, editing, and sharing out your most epic gaming moments. It’s not easy or consistent to do that for PC games today. We’re bringing this beloved feature to Windows 10, now accessible by simply pressing Windows+G. With the games you love playing – whether on Xbox Live, Steam, or other services – you can record, edit, and share game clips with all your social networks.

Fable Legends. Today we announced that we are bringing Fable Legends to Windows 10 PCs, day-and-date with the Xbox One version in 2015.  This means Fable fans running Windows 10 will be able to play against their fellow gamers on Xbox One. It’s the same game, in the same world, on the same map. Fable Legends is just the first of the major game franchises from Microsoft Studios coming to Windows 10 and we will have more to share in the coming months.

Microsoft has also revealed that an early version of the Windows 10 Xbox App will be available as part of next week's Windows 10 Tech Preview update. The Technical Preview is available for free to all. (It can be found here.)