Harmonix' 'Disney Fantasia: Music Evolved' For the Xbox One Back Up For Less Than $5

You are going to need a Kinect.

Once upon a time, the Xbox One featured its own special Kinect module, and for that once mandatory inclusion, Harminox released the very unique 'Disney Fantasia: Music Evolved.' (Check out the review here). Of course, by the time that 'Fantasia' was released, Microsoft had already done a 180 on the Kinect.

The upside today is that for anyone stuck with a Xbox One Kinect, 'Disney Fantasia: Music Evolved' is a must-own (or at least a must-try), especially at today's price of $4.30 (89% off of the launch price, order here). This is a deal that has come up a few times recently, but it alwasy seems to sell out quickly.

It's worth noting as well that the game contains more than just the music of 'Fantasia.'

From Microsoft, "Disney Fantasia: Music Evolved is a breakthrough musical motion video game inspired by Disney’s classic animated film “Fantasia.” Featuring more than 30 songs and 60 remixes, Disney Fantasia: Music Evolved empowers you to create {and share} your own versions of current hits, classic rock, classical music, and more. Perform your favorite songs from Imagine Dragons, Queen, Drake, Nicki Minaj, Bruno Mars, AVICII, The Who, The White Stripes and many more. Your Kinect puts you in control of some of the world’s best known songs, changing them in intuitive and surprising new ways as you play. Experience music in a brand new way!" 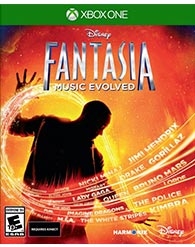