Dolby Vision and Dolby Atmos soon teamed up into Dolby Cinema, a premium exhibition auditorium with a proprietary version of the Christie 6P dual-4K laser projector capable of 31fL and a million-to-one contrast ratio. There are also specifications for screen size, location, audience viewing angles, as well as a Signature Entrance video wall. The first Dolby Cinemas debuted in Europe, while in the US Dolby partnered with AMC to create Dolby Cinema at AMC Prime. In hindsight, this progress feels inevitable.

Have you ever wondered how a company can launch a new type of premium exhibition auditorium?

Sure, Dolby has a reputation for quality, but graphics and individual tech demos aren't enough to convince people to invest in a brand new premium format auditorium. So, in order to sell Dolby Cinema to filmmakers, studios, and potential exhibition partners, they first created... 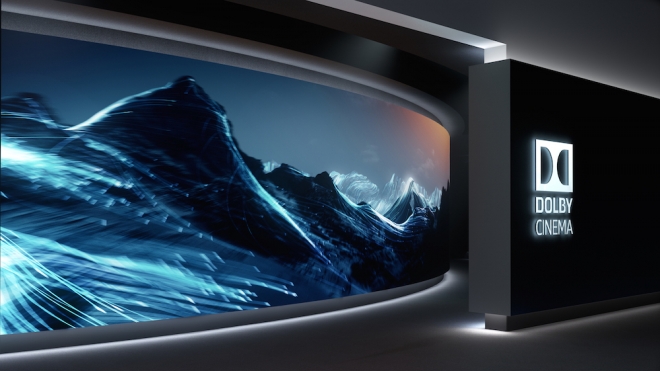 After purchasing The Vine, an old one-screen movie house a few steps away from the famous Hollywood and Vine intersection, Dolby renovated the entire space. In the simple lobby, eyes are drawn to the Signature Entrance, a curving video wall with moving content tied to each film.

Once inside the auditorium, all AMC Prime similarities drop away. Where AMC Prime loudly shows off speakers with an eye-catching red lighting scheme illuminating each one, the Dolby Cinema Prototype offers a cooler, blue-toned auditorium that hides all 35 speakers and six subwoofers behind sonically-translucent black fabric, or behind the "floating" screen outlined in more blue lighting. This is how full spec Dolby Cinemas should look. I must admit I like either arrangement -- at times I love to show off gear, but there's also something wonderful about clean spaces. Not knowing where every speaker is located adds to the magic. 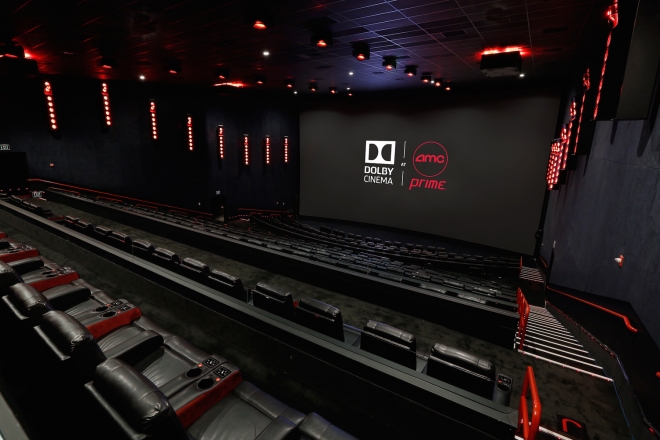 The Dolby Cinema Prototype screen is a 35', 1.85:1 aspect-ratio Harkness model capable of a 31 fL peak luminescence in 2D, and 14fL in 3D. Much like the AMC locations I've visited, there was no physical matting for widescreen aspect ratio content, something I wish they would adopt. The auditorium contains about 70 chairs and is organized in a typical stadium style layout, but is small enough to feel intimate. And, even with a mid-sized screen, the experience was still enveloping, with the auditorium itself disappearing when the movies played. For those who have yet to experience Dolby Vision, the million-to-one contrast ratio is capable of drowning large auditoriums into utter darkness. It's wonderful.

Sitting in the Dolby Cinema Prototype over two back-to-back evenings, I realized this showcase movie house, which also acts as a working laboratory to color grade Dolby Vision content, is small enough to be classified as a dream home theatre. Watching movies anywhere else feels like a step back.

Honestly, if it had recliners, I would have refused to leave.

In honor of Oscar Season, 20th Century Fox was kind enough to lend Dolby two Awards contenders. First up was 'The Revenant', which was a 4K DCP (Digital Cinema Package) in Dolby Vision and with a Dolby Atmos sound mix.

It's really hard to describe, sometimes, how high dynamic range looks to those who have not experienced it. In the case of this film, shot entirely in natural lighting, it made the whole experience more lifelike when it came to brighter imagery. Fiery torches and bonfires revealed added detail where standard dynamic range imagery would blow out. For years, cinema skies have lost much of the color and detail to blown out highlights. Not so in Dolby Vision. Also, there are numerous shots -- mostly in the day -- where there's more visible detail in backlit objects like trees.

The great news about this HDR grading is, from what I could tell at my Fox Innovation Lab demo, the Ultra HD Blu-ray is going to replicate much of this Dolby Vision experience.

On the flip-side of that coin, it seems 'The Revenant' Ultra HD Blu-ray is only getting a 7.1 sound mix for the home, which is a shame. This Dolby Atmos mix is incredible and immersive. The sound design has a huge dynamic range, from heart pounding and chaotic survival sequences, to simply elegant moments where the natural world is resolved so convincingly, it sounded like I was outside in the rain. 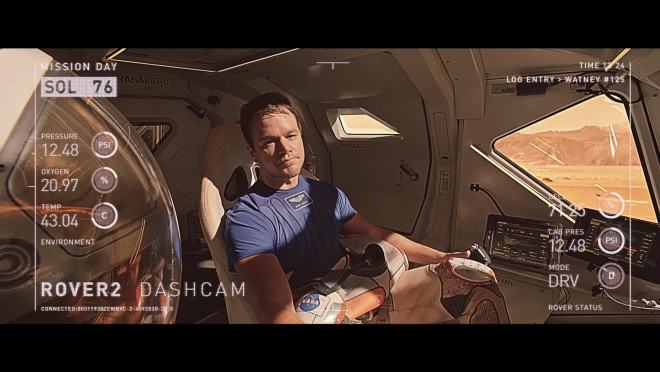 Our second screening was 'The Martian', which was unique because its 2K DCP was presented not only in Dolby Vision and Dolby Atmos, but also in 3D. Currently, Dolby Cinema at AMC Prime auditoriums are 2D-exclusive, a decision AMC made because they have IMAX 3D and RealD 3D auditoriums. Also complicating matters, Ultra HD Blu-ray elected not to support 3D (even at sub-4K resolution).

So this was the first chance I've had to see any 3D content in High Dynamic Range.

In short, it was a revelation. It has all the added color pop and vibrancy of the Ultra HD Blu-ray, mixed with the depth and dimensional of the Blu-ray 3D. Space sequences were so dark the screen melted into the background. And, though peak luminescence does drop to 14fL, it's still ultra-bright compared to standard 3D, which project at a miserable 4-5fL. I only wish more people could have seen 'The Martian' this way. It was an extraordinary way to watch the film.

On the sound front, the Dolby Atmos mix was surprisingly moderate in terms of overhead sound effect placement and overall immersion when compared to 'The Revenant', 'Gravity', or 'Mad Max Fury Road'. This mix definitely has its moments of surround grunt, I'm glad to have heard it, and wish it was available on the Ultra HD Blu-ray -- it too is locked to 7.1 -- but at least DTS:Neural:X or Dolby Surround upmixers doing a good job of putting sounds back where they need to be. 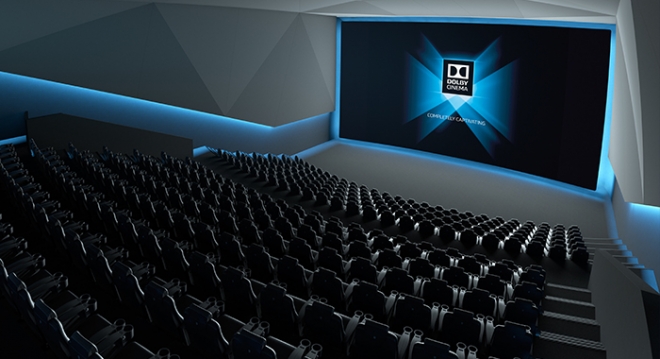 They set a high standard by which all movie theatre going experiences can be judged. Hands down. Pure images and ultra immersive sound. A premium experience worth the extra coin, movies have never looked this good on the silver screen (and yes, this includes 70mm), with the only other auditorium that's even in the same league being IMAX laser.

If you're looking for a great place to see movies, I highly recommend shooting over to the Dolby Labs website (HERE) or AMC Theatres (HERE) to find a movie playing in this format. It's well worth it.

If you're an exhibition chain considering building a Dolby Cinema... please hurry up and build several. AMC is doing so well they're rushing to build more.

If you're a studio or filmmaker... please grade more content in Dolby Vision (or HDR10) and Dolby Atmos (or DTS:X), and then put them all out on UHD Blu-ray and streaming. Home cinema technology has come so far, I can enjoy movies again and again just like in cinemas...but not if you drop features or quality. High five to Warners for stepping up with massive support for Dolby Vision and Dolby Atmos across platforms.

If you're in the Blu-ray Disc Association or a streaming service like VUDU... Please find a way to make 3D HDR content available. Whatever needs to be done, but it's a magnificent way to see movies. 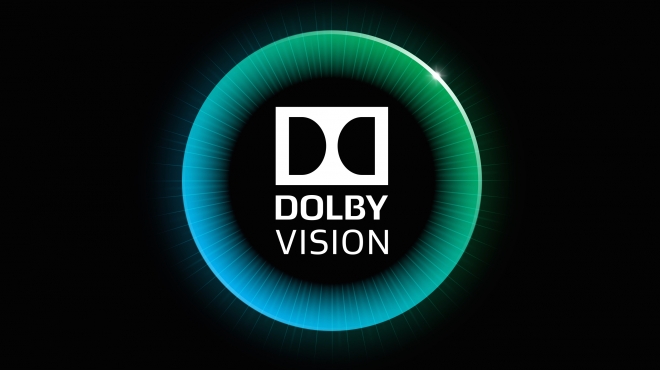 Here's a current list of Dolby Vision titles available to rent / own via VUDU (unless otherwise noted): 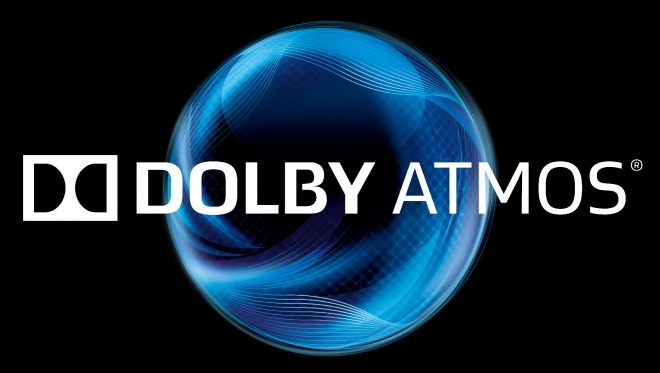 Here's a current list of Dolby Atmos titles available to rent / own on Blu-ray Disc (unless otherwise noted):