Arrow has revealed its May release slate with Wild Things getting a 4K Ultra HD Blu-ray upgrade. 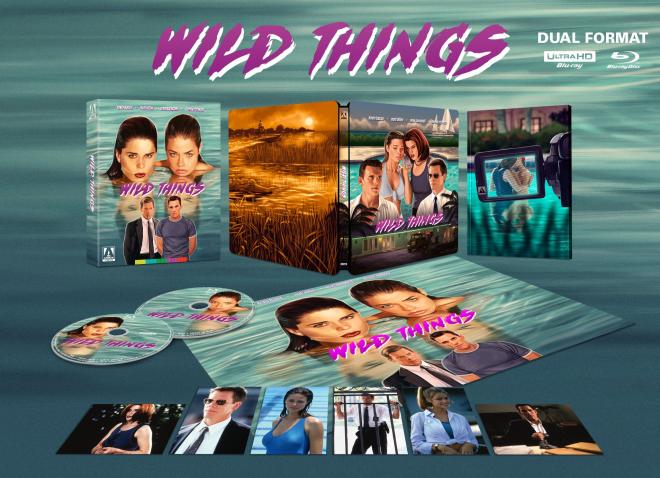 A spoiled rich kid, a troubled teen from the wrong side of the tracks, a carefree playboy and a dogged detective find themselves all caught up in the sex crime of the century in this steamy star-studded crime thriller from the director of Henry: Portrait of a Serial Killer.

Popular and charming, student counsellor Sam Lombardo (Matt Dillon) is no stranger to being the focus of female attention within the moneyed cliques of Florida’s Blue Bay. His fortunes are about to change dramatically, however, when one of the wealthiest students at his high school, sultry siren Kelly Van Ryan (Denise Richards), accuses him of rape. The charge looks sure to stick when another girl from the other end of the social spectrum, Suzie Toller (Neve Campbell), steps forward with her own allegations, but Detective Duquette (Kevin Bacon) smells something fishy, and the truth is as murky and dangerous as the alligator-infested swamps in the hinterlands of this affluent beach community.

Presented in new 4K restorations of its original theatrical version and extended ‘Unrated Edition’, Wild Things is a classic piece of sexy late-90s neo-noir from director John McNaughton and writer Stephen Peters, whose serpentine plotting will keep you on the edge of your seat until the end credits roll.

Also in 4K but in the UK only is  Candyman (Limited Edition) - 4K Ultra HD Blu-ray starring Tony Todd and Virginia Madsen on May 23. 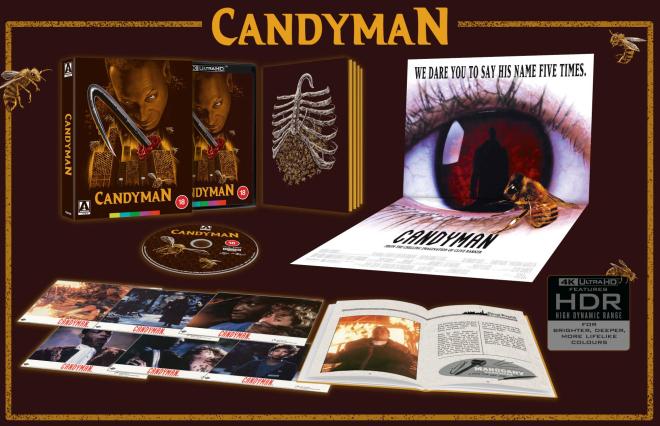 Dare you say his name five times? From the chilling imagination of horror master Clive Barker (Hellraiser, Nightbreed) comes Candyman – one of the greatest horror movies of the ‘90s, now newly restored on 4K UHD from Arrow Video.

When grad student Helen Lyle (Virginia Madsen) begins working on a thesis about urban legends, she comes across the terrifying tale of the Candyman – a vengeful, hook-handed spirit who can be summoned by saying his name five times in the mirror. As her research leads her into the bowels of Chicago’s deprived housing projects and deeper into the Candyman’s world, Helen learns that some legends are best left well alone.

Expertly directed by British filmmaker Bernard Rose (Paperhouse) and boasting an astounding score by composer Philip Glass, Candyman ingeniously reworks Clive Barker’s original short story “The Forbidden” (originally published as part of his groundbreaking Books of Blood series) into a modern horror parable that remains as timely today as ever.

Next, on Blu-ray we have Girls Nite Out  on May 16. There will also be an exclusive with "The Scaremaker" O-Card).

A host of familiar genre faces including Hal Holbrook (Creepshow), Rutanya Alda (Amityville II: The Possession), Julia Montgomery (The Kindred) and Lauren-Marie Taylor (Friday the 13th Part 2) rounds out the cast of this gloriously mean-spirited slice from the slasher golden age, Girls Nite Out!

The students of DeWitt University are preparing themselves for a night of fun and frolics in the form of an all-night scavenger hunt. Little do they know that they are in fact the ones being hunted… An unhinged assailant, disguised in the college’s goofy bear mascot outfit – and bearing knives for claws, two years before Freddy donned his famous gloves – is stalking the campus hellbent on carving up co-eds.

Originally released under the only marginally more appropriate title of The Scaremaker, Girls Nite Out is a decidedly singular slasher flick which comes on like a frenetic cross between Animal House and Friday the 13th – veering from jovial frat antics to jarringly disturbing scenes of the killer shrieking obscenities as he slices up his victims. On this nite out, no one is coming home!

On the 24th comes the kickass classic from “Jimmy” Wang Yu One Armed Boxer . 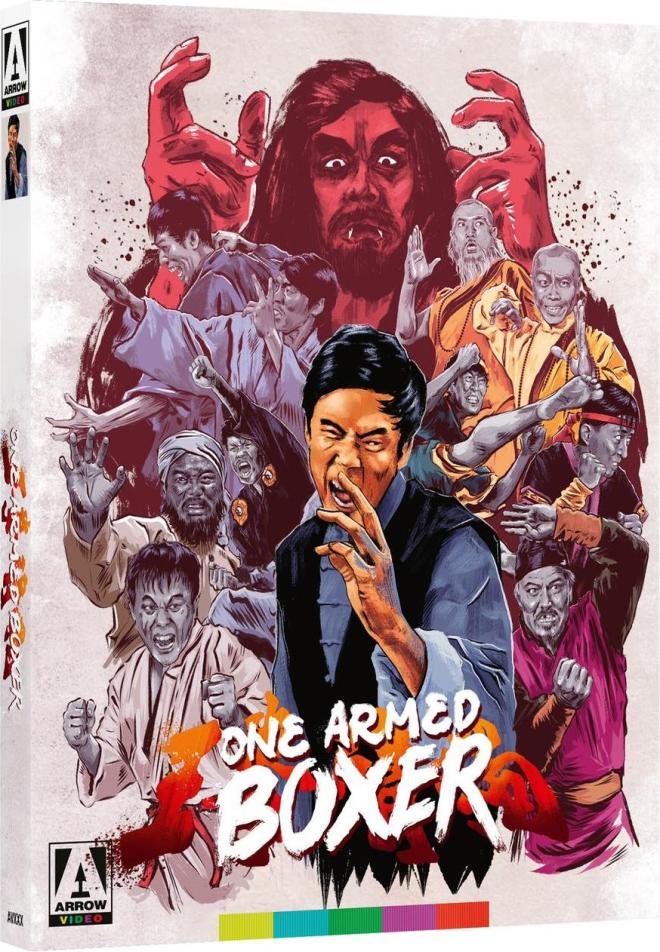 When former Shaw Brothers executive Raymond Chow founded rival studio Golden Harvest in 1970, he quickly teamed up with “Jimmy” Wang Yu – Hong Kong’s first kung fu superstar and formerly Shaw’s biggest box office draw. Bringing over his peerless talent for taking on all foes with one hand tied behind his back, Wang wrote, directed and played the title role in one of his most unmissable kickass classics. From the legendary star of One-Armed Swordsman and The Chinese Boxer comes… One-Armed Boxer!

Yu Tian Long (Wang) is the best fighter to come out of his local martial arts school, but when he crosses the ruthless leader of a local crime syndicate, the big boss’ brutal bevy of deadly killers make mincemeat out of the school and everyone inside. Now the only survivor of the massacre, and short of one appendage, Yu is gifted a powerful elixir that promises to give him the strength to take swift revenge on the army of assassins, each representing the most lethal forms of fighting from across the Eastern hemisphere.

Proving once and for all that you only need five fingers of death to get the job done, Wang would later reprise his role in the infamous sequel Master of the Flying Guillotine, but it’s the dementedly inventive original where he’s arguably at the height of his powers.

On the 30th (UK only), Gaspar Noé's Lux Aeterna starring Charlotte Gainsbourg and Béatrice Dalle will have a Blu-ray release. 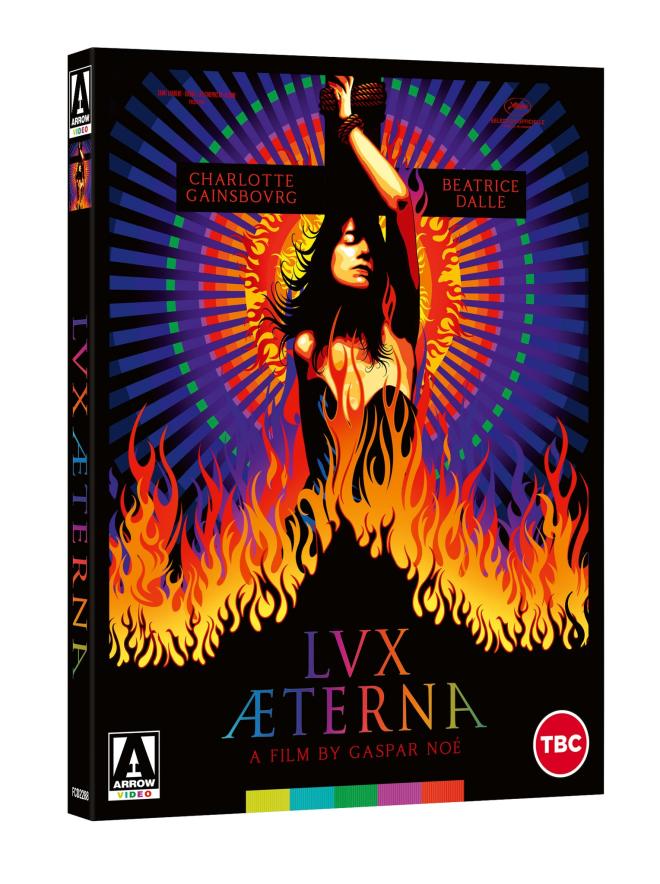 Gaspar Noé, the arch provocateur of New French Extremity responsible for Irreversible and Enter the Void, blurs the boundaries between reality and fiction in Lux Æterna, his ode to the suffering and sacrifices involved in the creation of art.

French cinema icons Charlotte Gainsbourg (Ismael’s Ghosts, Antichrist) and Béatrice Dalle (Betty Blue, Inside), playing themselves, star as the lead actress and the director of an experimental film about witches. But as preparations for the shoot get underway, the increasingly chaotic production slowly unravels as egos and bitter resentments rise to the surface, threatening to derail the entire enterprise.

Shot over just five days and largely improvised by the superlative cast, Lux Æterna is a powerful, hypnotic assault on the senses like no other, cementing Noé’s position as one of the most incendiary voices in cinema today.

Finally, Gaspar Noé's Enter the Void[UK Import] will be released on Blu-ray on the same date. 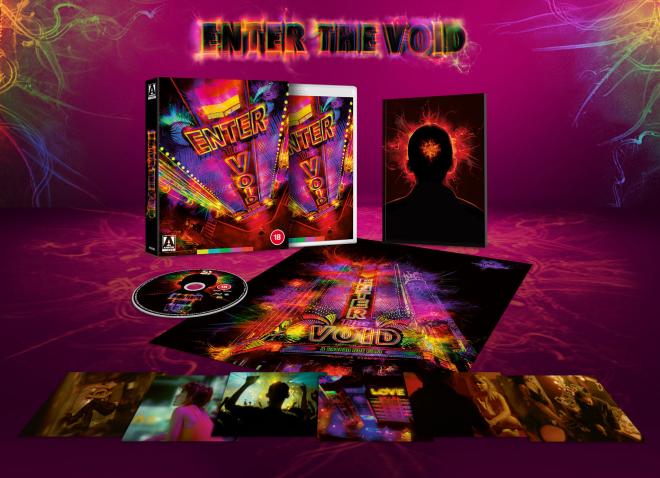 Eight years after the controversial and shocking Irreversible, director Gaspar Noé cemented his reputation as the enfant terrible of New French Extremity with perhaps his most challenging film to date – a hallucinatory meditation on life, death and rebirth, shot entirely in the first person.

American siblings Oscar (Nathaniel Brown) and Linda (Paz de la Huerta, The Limits of Control) eke out a shared existence in Tokyo – he by dealing drugs, she by working as a stripper. However, tragedy strikes when a deal turns sour and Oscar is shot by the police. As his lifeless body lies on the floor of a public toilet, his soul floats high above the neon-drenched Tokyo streets, observing the effect of his death on his sister and reliving the events in his life that brought him to this juncture.

Described by Noé himself as a “psychedelic melodrama”, Enter the Void boasts mesmerising cinematography by the award-winning Benoît Debie (Climax, Spring Breakers) and a hypnotic soundtrack of experimental and electronic music. Powerful and transcendent, it offers viewers an immersive cinematic experience like no other.

We will post pre-order links when they are available as usual.