The latest Stephen King adaptation will float to both formats in January.

In an early announcement to retailers, Warner Brothers says 'It (2017)' will arrive on Blu-ray and 4K Ultra HD Blu-ray on January 9.

New Line Cinema's horror thriller IT, directed by Andrés Muschietti ("Mama"), is based on the hugely popular Stephen King novel of the same name, which has been terrifying readers for decades. When children begin to disappear in the town of Derry, Maine, a group of young kids are faced with their biggest fears when they square off against an evil clown named Pennywise, whose history of murder and violence dates back for centuries. IT stars Bill Skarsgård ("Allegiant," TV's "Hemlock Grove") as the story's central villain, Pennywise. An ensemble of young actors also star in the film, including Jaeden Lieberher ("Midnight Special"), Jeremy Ray Taylor ("Alvin and the Chipmunks: The Road Chip"), Sophia Lillis ("37"), Finn Wolfhard (TV's "Stranger Things"), Wyatt Oleff ("Guardians of the Galaxy"), Chosen Jacobs (upcoming "Cops and Robbers"), Jack Dylan Grazer ("Tales of Halloween") and Nicholas Hamilton ("Captain Fantastic").

Each release will feature a Dolby Atmos soundtrack (the 4K UHD will also include Dolby Vision HDR) and supplements include: Pennywise Lives! – Discover how Bill Skarsgård prepared to portray the primordial creature known as Pennywise the Dancing Clown; The Losers' Club – Get up close and personal with the teenage stars of "IT" as they bond together during the production; Author of Fear – Stephen King reveals the roots of his best-selling novel, the nature of childhood fear and how he created his most famous monster, Pennywise; and Deleted Scenes – Eleven deleted or extended scenes from the film.

You can find the latest specs for It (2017) linked from our Blu-ray and 4K, where it is indexed under January 9. 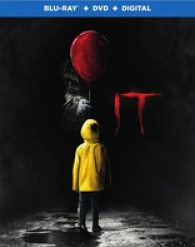 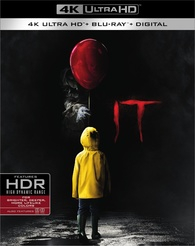