The action flicks are racing toward Ultra HD Blu-ray in March.

In an early announcement to retailers, Universal is preparing 'Fast & Furious 6' and 'Furious 7' for Ultra HD Blu-ray on March 28.

'Fast & Furious 6' - Vin Diesel, Paul Walker, Dwayne Johnson and Michelle Rodriguez lead an all-star cast as the global blockbuster franchise built on speed delivers the biggest adrenaline rush yet in Fast & Furious 6. Hobbs (Johnson) has been tracking an organization of lethally skilled drivers, whose mastermind (Luke Evans) is aided by the love Dom (Diesel) thought was dead, Letty (Rodriguez). The only way to stop the criminal mercenaries from stealing a top secret weapon is to outmatch them at street level, so Hobbs asks for the help of Dom and his elite team. Payment for the ultimate chase? Full pardons for all of them and a chance to make their families whole again. 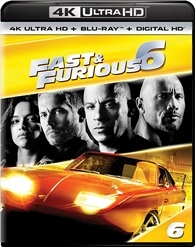 'Furious 7' - Vengeance hits home in Furious 7 as Vin Diesel, Paul Walker and Dwayne Johnson lead an all-star cast across the globe in their most gravity-defying and emotional adventure yet. Targeted by a cold-blooded black-ops assassin (Jason Statham) with a score to settle, their only hope is to get behind the wheel again and secure an ingenious prototype tracking device. Facing their greatest threat yet in places as far away as Abu Dhabi and as familiar as the Los Angeles streets they call home, the crew must come together once again as a team, and as a family, to protect their own. 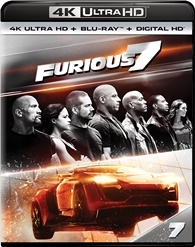 The Ultra HD Blu-rays will feature 2160p video, a DTS:X soundtrack, and supplements will mirror those found on the previous Blu-ray editions.

Suggested list price for each Ultra HD Blu-ray is $39.98.

You can find the latest specs for 'Fast & Furious 6' & 'Furious 7' linked from our Ultra HD Blu-ray Release Schedule, where they are indexed under March 28.