I am a recent convert to the Fast and Furious franchise. After hearing in March that the seventh movie had been announced even before the release of the sixth, I decided it was time to see what all the fuss was about. Although I didn't think much of the story and characters in The Fast and the Furious, I thought the stunts and action were handled quite well. 2 Fast 2 Furious found Walker heading out on his own to Miami but suffered like many sequels do, from being a copy of the original. Appearing as though the producers found a script lying around that they could just slap their banner on, Tokyo Drift finds a new character Sean (Lucas Black) take the franchise to Japan. A cameo at the end was the only thing revealing the movie existed in the same movie universe. With Vin Diesel on board as a producer, Fast & Furious righted the ship and saw the franchise return to what it did best. Fast Five took things in a different direction, gathering characters from the first two movies and becoming a heist movie, like Ocean's 11. The conflict was increased with the inclusion of Diplomatic Security Service agent Luke Hobbs (Dwayne Johnson) in pursuit of the gang.

The seeds for the Fast & Furious 6 story were sown in Five's epilogue. Although proclaimed dead in F&F, Dom's girlfriend Letty (Michelle Rodriguez) is discovered alive and working with a criminal gang in Europe, led by Owen Shaw (Luke Evans). After an attack on a Russian military convoy, Hobbs (Dwayne Johnson) approaches Dom (Vin Diesel) for help. Dom agrees to get the whole gang back together on the condition that they receive pardons.

Shortly after arriving in London, they fail to stop a job by Shaw. As he and the gang learn Shaw is stealing components to create a power-disabling device he can sell, Shaw and his gang learn Letty has a connection to Dom. However, she has no memory of him because instead of dying after an accident, as everyone believed, she escaped with amnesia. Though I can't remember the scene exactly from two movies prior, I don't believe the filmmakers left themselves an out and am almost certain they cheated and created new material to change the story. 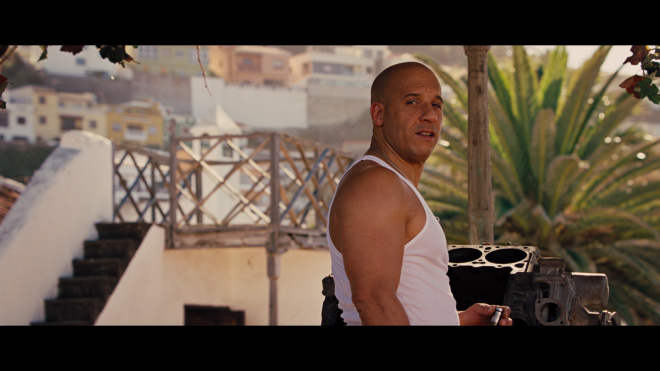 As the gangs, who are very well matched, continue to cross paths, Letty grows confused in reaction to the way each group treats her. And what helps seal the deal for her is a jaw-dropping, physics-defying moment during a crazy chase when Shaw is willing to sacrifice her to escape while Dom is willing to sacrifice himself to save her. I should mention that sequence involves Dom's team chasing after Shaw, who drives a tank down a motorway, smashing through and firing its gun at any car that gets in his way. It's exciting and caused a good bit of destruction, so I presumed it would end with Shaw's capture. Thankfully, I was wrong, and the filmmakers upped the ante even higher for a spectacular sequence that involved the good guys trying to stop Shaw and his people from leaving on a transport plane. Setting aside the logistics of how long that runaway must have been, every one of the F&F team gets into the act and shines.

This is director Justin Lin's fourth, and for now final, movie in the franchise, and he goes out on top. He uses all the elements that have been successful: over-the-top action, humor, and camaraderie between the characters, and of course, good-looking cars and girls, and overcomes most of what didn't. While Fast Five was a bit bloated during its over two-hour length, FF6, which runs just as long, is paced better and doesn't drag. The movie's main flaw is the villain. Evans doesn't have much presence or charisma as Shaw, and the character comes off as one-dimensional and rather forgettable. But to be fair, there's not a whole lot of characterization to the good guys either.

It may have been easy to dismiss the first few installments, especially after Tokyo Drift nearly sank the franchise, but with Fast & Furious and Fast Five pushing the series' domestic box-office total to nearly $700 million and over $1.5 billion worldwide, there's no denying its success. Even more astonishing is how Fast & Furious 6 bucks conventional wisdom about sequels and is my favorite of the series so far.

Universal Studios Home Entertainment brings Fast & Furious 6 to 4K Ultra HD Blu-ray as a two-disc combo pack with a flyer for an UltraViolet Digital Copy. At the moment, we are unable to verify if the correct size of the content, but the dual-layered UHD66 disc sits comfortably opposite a Region Free, BD50 disc inside a black, eco-cutout case with a glossy, embossed slipcover. At startup, the disc goes straight to an interactive menu screen with full-motion clips and music playing in the background.

The sixth installment in the muscle car franchise takes to the road on Ultra HD with an excellent and sometimes beautiful HEVC H.265 encode that doesn't immediately offer the sort of night and day difference we'd expect from the format.

The jump to 2160p video displays subtle, appreciable improvements over its HD counterpart owners will find worthwhile. Overall definition and clarity receives a considerable uptick, showing the minute detail, wrinkle and crease in the clothing. Viewers can make out the stitching and threading in the outfits as well as in the interiors of various vehicles. Background information in the distance is continuously visible with distinct pock marks and cracks in the city architecture while the metal of the more worn cars show minor scratches and tiny rust spots. Although actors can occasionally seem a bit anemic and pale, faces are, for the most part, extraordinarily revealing with lifelike complexions, exposing the most negligible blemish. Shot in traditional 35mm film, an ultra-fine layer of natural grain showers every scene, providing the 4K presentation with a beautiful cinematic quality. Unfortunately, I noted a few instances of very mild aliasing along the sharpest edges in the windows and light fixtures.

Presented in its original 2.35:1 aspect ratio, the transfer also arrives with improved contrast, giving the movie a noticeably brighter appeal. Crisp, clean whites grace every scene, which make the many nighttime sequences really standout. Specular highlights during these moments are also a marked improvement, providing the metal chrome trim of the cars with a true-to-life sparkle and dazzling various night exteriors with sharp clarity in the headlights and explosions. Better still, brightness levels are amazingly dynamic with superb gradational differences between the various shades, delivering pitch-black shadows that never ruin the finer details in the darkest portions. Combined with the excellent contrast, aerial shots of the city skyline at night are stunning. The original cinematography isn't exactly the most colorful, but primaries are appreciably fuller, particularly reds and blues, while secondary hues come with a lovely glow, and flesh tones appear more natural and realistic compared the Blu-ray, making the UHD a substantial improvement.

Along with being upgraded to 4K video, the Furious team rides into action with a supped up DTS:X soundtrack that improves upon its predecessor in a few areas but remains relatively similar on the whole.

A wide, broad soundstage generates an engaging half-dome wall of sound, as background activity spreads across all three channels and into the front heights, creating a convincing and spacious soundscape with a great deal of presence. Delivering superb separation and fidelity as the rumble of car engines speed through city streets, imaging is extensive with distinct clarity in the mid-range, maintaining excellent definition and detail during the loudest action sequences. Vocals are precise and intelligible from beginning to end, and the low-end packs plenty of oomph to give the music some weight while providing the engines a lifelike growl and a boom to explosions.

The sides and rears are also continuously employed with a variety of background activity, from the subtle ambient effects of Brian and Mia's home to the screeching noise of car races. In fact, a majority of the design is really focused on the surrounds, creating a very satisfying soundfield with cars racing all around. On a few occasions, atmospherics travel into the ceiling speakers, but the musical score really does most of the work, filling the empty space above the listening area. Also, and arguably the object-based format's strongest feature, the rumbling sounds of car engines convincingly echo into the surrounds, creating an appreciable dome-like effect owners will love.

Audio Commentary: Director Justin Lin rides solo for this audio track where he explains some of his thought process and creative decisions while sharing some anecdotes from the set.

The Making of Fast & Furious 6 (HD): Four-part featurette on various aspects of the production.

The Mastermind and the Mole (4 min)

Take Control (HD, 20 min): A short set of interviews with the primary cast on the previous movies.

It's All About the Cars (HD): Three pieces centered around the vehicles and stunts.

With a straightforward and simple cops versus robbers plot fueling the engine, Fast & Furious 6 roars unto the screen with a surprisingly fun and thrilling installment to the popular franchise. The Ultra HD Blu-ray rumbles with an excellent 4K presentation and an outstanding DTS:X soundtrack, but they are joined by the same set of supplements as the Blu-ray.

Nevertheless, the UHD offers an appreciable improvement over its predecessor which fans will want to add to their movie collection.

Sale Price 22.49
List Price 29.98
Buy Now
3rd Party 5.99
In Stock.
See what people are saying about this story or others
See Comments in Forum
Previous Next
Pre-Orders
Tomorrow's latest releases