Brian De Palma's classic crime drama returns to Blu-ray and debuts on 4K in a Gold Edition this October.

Universal says Scarface will be available on 4K Ultra HD Blu-ray and Blu-ray on October 15.  There will also be a 4K limited edition set that includes a "The World is Yours" statue.

In the spring of 1980, the port at Mariel Harbor was opened, and thousands set sail for the United States. They came in search of the American Dream. One of them found it on the sun-washed avenues of Miami... wealth, power and passion beyond his wildest dreams. He was Tony Montana. The world will remember him by another name... Scarface.

HDR PRESENTATION OF THE FILM (4K)

The World of Tony Montana - Featurette

The Making of Scarface: The Video Game

You can find the latest specs for Scarface (Gold Edition) linked from our 4K and Blu-ray Release Schedules, where it is indexed under October 15. 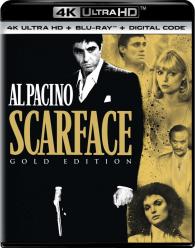 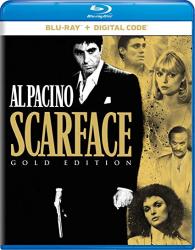