Brian De Palma's Scarface snorts up some 4K UHD with a sparkling and often stunning 4K UHD with HDR10 graded imagery. Better than ever and free of any annoying edge enhancement or DNR - this is the way Scarface was meant to be seen giving you a full appreciation of De Palma's style, grandeur, as well as Pacino's legendary performance. Universal has done well by fans offering up a terrific 2-disc or a 3-disc Limited Edition set including the pristine UHD, the newly remastered Blu-ray, as well as the classic 1932 original film. Plus you get the new retrospective 35th anniversary bonus. If you're a Scarface fan - you're going to want to add either release to your collection! Highly Recommended.

"This town is like a great big chicken waiting to be plucked."

Scarface is a film that is just damn near impossible to avoid - especially within my generation of mid-late 30-somethings who grew up sneaking VHS rentals and late-night viewings on HBO. For whatever reason, it was the movie you had to see in order to be a part of the in-crowd. I've seen Scarface so many times now I can't even remember what my first viewing was like. That's partly because I have a pretty different reaction to it every time I see it. Sometimes I'm in the mood where I see this as one of De Palma's finest efforts capturing the meteoric rise and tragic fall of an ambitious crime lord incapable of seeing past his own paranoia. Other times I can't look past the clunky nature of the last half as if it were two films smashed into one. 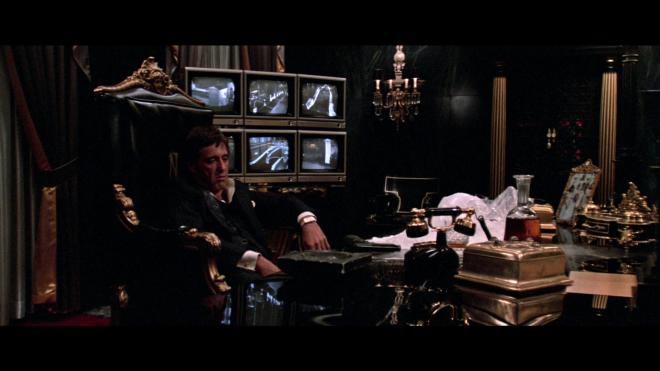 Watching it today - I'm leaning towards the former. Maybe I was just in a Pacino mood or it was just seeing it on UHD with such clarity, but I haven't watchedScarface this attentively appreciating every scene of the film in years. The shot composition - all of those elegant crane shots - the 80s Miami decor, the costumes; I just couldn't take my eyes off the details. That isn't to say anything about how much more I appreciated the performances. It's a hell of a film and this internal debate I have with it will probably continue. The next them I sit down to this one, I'll probably have the complete opposite opinion. But then I feel like that's part of the process of film appreciation. Does the film change for the better or worse on repeat viewings? I rarely leave my opinion to a single viewing and Scarface is one of those where I watch and rewatch with very different takeaways each time I see it. Today, I love it. So I'll hold onto that feeling as long as I can.

Our man E. worked up a terrific review for the original 2011 Blu-ray, check that out HERE.

Universal Studios goes full out with their new Two-disc Scarface Gold Edition 4K UHD + Blu-ray + Digital set. Also available is a Three-Disc Limited Edition "The World is Yours" 4K UHD Blu-ray + Blu-ray + the 1932 classic on Blu-ray with Digital copy with the replica statue.  You have your options, you can by the two-disc set all on its own, or you can go for broke with the three-disc release. Otherwise, the bits and pieces within the 4K and SDR Blu-rays are the same. The disc loads to an animated main menu with Universal's standard navigation menu. 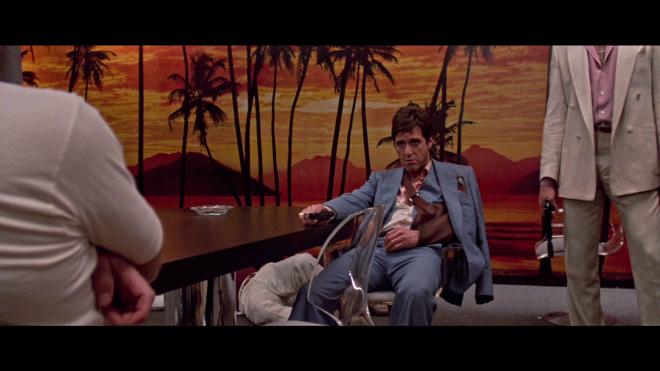 After the 2011 Blu-ray release, things could only get better for Tony Montana with a native 4K UHD 2160p 2.35:1 transfer with HDR10 - and they have! Gone is the unsightly edge enhancement. Gone is the needless DNR in random sequences. Yes, some soft shots remain but they're baked in the bread and can't be improved. To that point - this is another gorgeous catalog transfer! While some were more forgiving of the 2011 release's issues, I wasn't a fan so I never pulled the trigger on it since I already had the DVD - which had its own issues. This 4K UHD Blu-ray puts those past releases to shame!

Fine film grain is apparent throughout - even when it could appear a bit noisy on the old Blu-ray, it's still apparent but more refined and less chunky looking without any signs of digital tampering. To that side, fine details have never looked better! Facial features, costuming, the Miami architecture - everything is on full display here. Maybe that's why I couldn't take my eyes off it this viewing? I felt like I was truly seeing everything better than before! As I said, there is still some softness here and there, but that's by design. That hotel room with the infamous chainsaw sequence has never looked grimier - and therefor - beautiful! Likewise, when Tony reaches his peak, that mountain of cocaine in front of him even offers up small granular details that I'd never noticed before.

With this HDR10 application, it was judiciously applied and looks great. Never once did I feel like some colors were pushed too hard or flesh tones looking too awkward. If anything HDR10 balanced the colors out than previous releases. Certain shot-reverse-shot sequences that were done at different times of the day offer some more uniformity in light and dark - without completely screwing up the colors. It's a subtle thing but I felt like this was a more natural look to the image than before. Night sequences practically glitter - especially those neon signs! The pink/purples of the signs have a lovely glow but you can still make out the individual tubes in the lights.

Black levels are spot on giving the true black appearance without any crush issues. Contrast is on point allowing for bright whites in shirts or the white paint on buildings to pop without any blooming troubles. Free of any speckling or notable damage, Scarface looks amazing and this is one of Universal Studios better catalog release efforts to date. 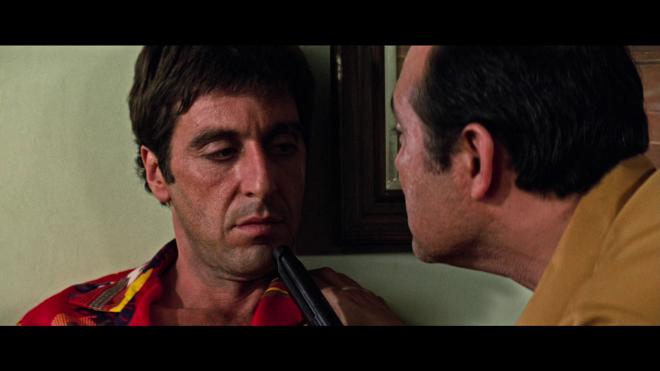 You now get a pair of audio tracks to enjoy Scarface with. A brand spanking new DTS:X mix, or the traditional DTS-HD MA 2.0 stereo track. Both are great in their own ways, but it's really going to come down to user preference. For myself, if and when I can, I tend to appreciate the film's original intended audio mix, so in this case, the older stereo track fits me just right. However, this new DTS:X mix is a beast where it counts. While a new mix that seems to feature some newer sound effect additions - or at the very least tweaked - the mix is aggressive, spacious, and well balanced with plenty of active LFE elements. Overheads don't get a lot of workout outside of action sequences. The riot at "Freedom Town" or the siege at Tony's mansion complete with "Little Friend" explosions are some great stuff! Dialogue is clean and clear throughout with plenty of active channel movement and effects. As I said, it's dealers choice. Both tracks are great, I could enjoy one or the other equally so depending on how you're set up - you get a ride out of both. 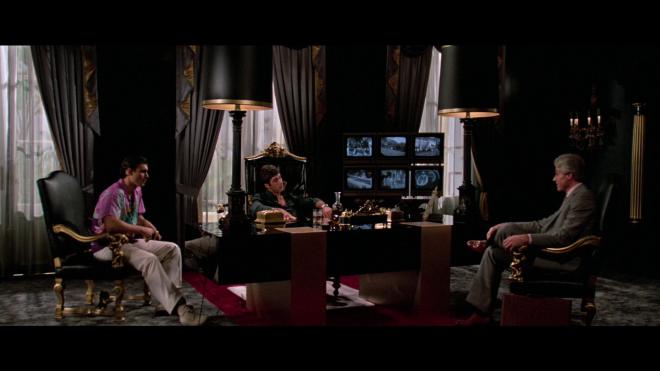 The only new bonus feature here is the Scarface anniversary reunion from April 2018 featuring De Palma, Pacino, Pfeiffer and Bauer. It's a lively discussion as they all talk about various aspects of making the movie, events that happened on set, and they touch a little bit on the upcoming remake but there's not much to say there. All of the other bonus features are on the included Blu-ray and are ported over from previous releases. Also included is the original 1932 film on Blu-ray instead of the previously included DVD version.

Oliver Stone's screenplay, Brian De Palma's style, Pacino's incredible performance, Scarface is a damned impressive piece of filmmaking. A worthy update of the 1932 original, it features some titans of cinema in their prime bringing their A-Game to every aspect of the production. It's a movie I'm constantly looking at and reevaluating how I feel about it. Sometimes I love it, sometimes I don't get the hype my generation has bestowed upon it. Today, I'm floored by it.

Seeing Scarface with such an impressive new 4K UHD HDR10 transfer may have been the tipping point for my appreciation. Previous releases had distracting trouble spots, but with a splendid restoration effort and judicious HDR10 application, the film has never looked better on home video. Toss in a new DTS:X audio mix and a new reunion bonus feature, you have a grand release. Whether you go for the big Limited Edition with the statue or if you just want the movie without the swag and 1932 original - you should be happy with Universal Studio's efforts. Highly Recommended.

Sale Price 19.99
List Price 29.98
Buy Now
3rd Party 12.98
In Stock.
See what people are saying about this story or others
See Comments in Forum
Previous Next
Pre-Orders
Tomorrow's latest releases