Dario Argento's classic horror film is getting the 4K treatment in November.

Suzy (Jessica Harper) travels to Germany to attend ballet school. When she arrives, late on a stormy night, no one lets her in, and she sees Pat (Eva Axén), another student, fleeing from the school. When Pat reaches her apartment, she is murdered. The next day, Suzy is admitted to her new school, but has a difficult time settling in. She hears noises, and often feels ill. As more people die, Suzy uncovers the terrifying secret history of the place.

Specs and supplements include:

Do You Know Anything About Witches? – 30 minute SUSPIRIA visual essay written,edited and narrated by Michael Mackenzie

Suzy in Nazi Germany – Featurette on the German locations from SUSPIRIA

A Sigh from the Depths: 40 Years of SUSPIRIA – All-new anniversary retrospective on the making of the film and its influence on cinema

You can find the latest specs for Suspiria - 4K Ultra HD Blu-ray linked from our 4K Blu-ray Release Schedule, where it is indexed under November 19. 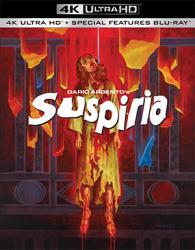