Kate Beckinsale returns to fight Lycans and Vampires on both formats this April.

In an early announcement to retailers, Sony says 'Underworld: Blood Wars' will hit Blu-ray and Ultra HD Blu-ray on April 25.

In the next installment of the blockbuster franchise, UNDERWORLD: BLOOD WARS follows Vampire death dealer, Selene (Kate Beckinsale) as she fends off brutal attacks from both the Lycan clan and the Vampire faction that betrayed her. With her only allies, David (Theo James) and his father Thomas (Charles Dance), she must stop the eternal war between Lycans and Vampires, even if it means she has to make the ultimate sacrifice.

Specs have yet to be revealed, but supplements include: Official Movie Graphic Novel (Exclusive to iTunes); "The Evolution of Selene"; "Building a Blood War"; "Old & New Blood"; and "The Evil Evolved".

You can find the latest specs for 'Underworld: Blood Wars' linked from our Blu-ray Release Schedule, where it's indexed under April 25. 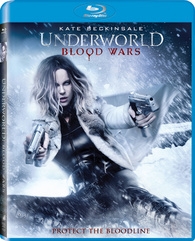 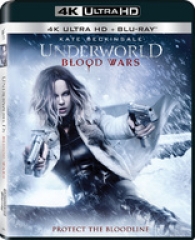