In the next installment of the blockbuster franchise, UNDERWORLD: BLOOD WARS follows Vampire death dealer, Selene (Kate Beckinsale) as she fends off brutal attacks from both the Lycan clan and the Vampire faction that betrayed her. With her only allies, David (Theo James) and his father Thomas (Charles Dance), she must stop the eternal war between Lycans and Vampires, even if it means she has to make the ultimate sacrifice.

At this point in the still-apparently-popular vampire saga, do moviegoers really require a brief recap of the events leading up to Underworld: Blood Wars? As the fifth installment of the millennia-long battle between the stylishly gothic undead and the wooly, uncouth werewolf pack, it's highly unlikely the remaining fanbase still willing to pay for this horror-fantasy soap-opera would have forgotten where the last sequel left off. Granted, the opening voiceover minutes with Kate Beckinsale's death-dealing Selene recalling the history of vampires versus Lycans is a signature style of the franchise, though it is the furthest from original, as seen in the equally long-running Resident Evil series. But the question is whether it's any longer necessary. Admittedly, I don't recall most of what happened in Awakening, so those "Previously on . . ." opening minutes were helpful. Ironically, the intro also quickly establishes a new setup that essentially asks viewers to forget most of the third sequel, except for a few cursory but still crucial notes to explain this entry's whole purpose for existing.

Reprising her role as the infamous Death Dealer responsible for killing hundreds of Lycans, Beckinsale explains that fans should pretty much give up on ever seen Michael Corvin — you now, the very reason for this franchise's creation — alive. Not for anything that makes logical sense, but because producers need a convenient excuse for Scott Speedman refusing to return to the franchise. After the first sequel, the actor decided to finally lay the character to rest six feet under, but the filmmakers cleverly exhumed him from his grave by keeping him in cryogenic sleep while introducing the unnatural couple's love child, Eve (India Eisley), who is also momentarily placed in her coffin for this slapdash continuation. But all that is neither here nor there because the only thing needed for resuscitating the series and keeping it from dying is Selene's magical blood, which now grants the lucky drinkers the ability to enjoy the warmth of sunrise. One such lucky bloodsucker is the ominously-named David (Theo James), setting up the crux of the movie's central plot and the not-so-subtle meaning behind the title. 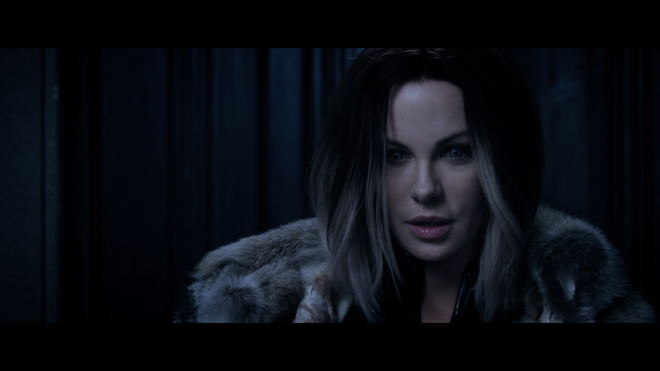 Our beautiful undead Selene is being pursued by both vamps and howlers this time around. No, wait! Isn't that same plot of every Underworld movie, including the second sequel prequel where a Beckinsale lookalike is also hunted for her Romeo & Juliet romance with the family pet? So, we're basically watching the same recycled plot reshaped into another battle where crystal-blue eyes stand in between two warring clans. Thankfully, Selene and David's budding relationship stays in the friend zone where it belongs. But the ruthlessly power-hungry Semira (Lara Pulver) wants to drive a stake in between them by pretending to hire the pair to train an army of bloodsuckers against a large pack of shaggy, grubby dogs, led by Game of Thrones star Tobias Menzies. Given all the melodrama, backstabbing and underhanded dealings throughout, I'm surprised the villains didn't pass each other notes to learn they want the same thing.

Of course, logic or a reasonably entertaining narrative in something like Underworld: Blood Wars is probably the last thought in the minds of the filmmakers. Or even the audience, for that matter. These types of movies are not made for pushing the envelope. They are purely meant for satisfying the lovers of dark fantasy who want to see vampire and werewolves duke it out. In that respect, cinematographer-turned-director Anna Foerster delivers the bloodletting fans are craving in more ways than one. Literally, there is a scene where Selene is being drained of her blood and another where we find out a werewolf has been juicing on hybrid blood because it's a cure-all against either clan's weakness. Selene and her daughter are in very high demand as the preferred drug of choice among the creatures of the night. Sadly, in spite of this mildly interesting twist to the franchise, the whole affair is more likely to put viewers into a deep slumber in the nearest grave than it is in resuscitating this pulse-challenged series.

Sony Pictures Home Entertainment brings Underworld: Blood Wars to 4K Ultra HD Blu-ray as a two-disc combo pack with a flyer for an UltraViolet Digital Copy and glossy slipcover. At the moment, we are unable to verify the size of the content, but the dual-layered UHD66 disc sits comfortably opposite a Region Free, BD50 disc inside a black keepcase. At startup, the disc goes straight to an interactive main menu that changes screens when switching between the usual options while music plays in the background.

The fifth installment of the sexy gothic vampire franchise sinks its teeth into Ultra HD with a strong HEVC H.265 encode that doesn't really drive a stake through its Blu-ray counterpart. To be fair, there are several improvements worth appreciating throughout, but it's frankly a minimal difference.

Shot digitally with the Red Weapon Dragon camera system, capable of 6K resolution, overall definition receives a nice boost, displaying razor-sharp lines in Semira's baroque house, the elaborate gothic furniture and the shiny, sterile gym where young vamps train to fight. Semira's coven is clean and tidy without the slightest sign of dirt while the cold stone dwellings of the Nordic coven feel grimy and dank because we can see moisture running down the pockmarked, fractured walls. We can slightly better make out the intricate details, jewelry and ultra-fine threading in the highly ornate costumes, and the tiny wrinkles and creases in Selene's tight latex suit are plainly visible. With excellent, revealing facial complexions, there is much to admire.

Where we encounter issues in the 2.40:1 image is in the brightness levels. Granted, blacks are noticeably richer with inkier shadows and a more stygian shine in the clothing, latex outfits, luxury cars and various furniture. However, this appears to be at the sacrifice of the finer details, making it very difficult to see the smaller items in the darkest portions of the frame. Much of this can be excused as the result of the stylized photography, but either way, the overall is almost too dark. Contrast remains about the same, which is heavily subdued. Nevertheless, specular highlights are nicely improved, revealing a bit more detail in various sources of light and gunfire while giving Selene's latex outfits and cars a slightly more realistic shine. As with the Blu-ray, there is little color to speak of in this deliberately dark and gloomy movie, but the few flashes of blue are electrifying and blood is a scarlet red while gunfire and explosions add fiery blazes of orange.

The battle between vampires and werewolves takes a stab at 4K with a bombastically engaging Dolby Atmos soundtrack that's exclusive to the Ultra HD version.

Like its DTS-HD counterpart, the object-based format is absolutely amazing, as a variety of activity fill the entire room from start to finish. Several demo-worthy sequences come with the loud clap of thunder in the distance, the echoes of growling Lycans invading the coven and a barrage of bullets fly in every direction. The rears are consistently employed with the subtle atmospherics of wind blowing through caves, the chatter of other undead guests or the howling of wolves, creating a highly satisfying and enveloping 360° soundfield. Things improve with many of those same effects traveling into the ceiling channels, particularly during fight sequences, and the score reliably bleeds into the front heights for a half-dome wall of sound. Better yet are scenes with rain falling above the listening area, but the real standout moment is when our pair of protagonist visit the Nordic coven. While walking around inside the caves, listeners can discretely hear water dropping from overhead, generating an amazing and splendidly immersive dome-like feel.

The rest of the action remains equally spread across the three front channels where lots of background activity and movement provide the movie with engaging, spacious presence. Vocals are not only well-prioritized and distinct, but many conversations move convincingly off-screen, adding to the design's impressive sense of space, particularly now as various subtle ambient effect move into the front heights. The mid-range is extensive and incredibly dynamic, exhibiting crisp, sharp detailing during the loudest, most ear-piercingly chaotic moments. And like other installments in the series, this fifth entry arrives with a thunderous, wall-rattling low-end, providing each gunshot, explosion, punch, and stomp of a Lycan's paw a heavy, potent feel. And with a couple moments here and there reaching the ultra-low depths, this lossless mix delivers a monstrous improvement.

The Official Graphic Novel (HD): As suspected, this a graphic novel version of the movie where users can flip through the pages via their remote cursors.

Building a Blood War (HD, 12 min): The standard EPK-like piece detailing the production, its design, and place in the franchise, featuring cast & crew interviews with lots of BTS footage.

The Evolution of Selene (HD, 8 min): A history of the character throughout the series.

The Evil Evolved (HD, 6 min): Much of the same, only this time on the werewolf baddies.

Underworld: Blood Wars is the fifth installment to the horror-fantasy soap-opera series, detailing the millennia-long battle between the stylishly gothic undead and the wooly, uncouth werewolf pack. Continuing the saga of Kate Beckinsale's death-dealing Selene, the latest entry does not succeed in resuscitating this pulse-challenged series while also not sending it to its final grave. The Ultra HD bares its fangs with a demo-worthy Dolby Atmos soundtrack but a 4K video presentation that only offers a small improvement over its Blu-ray counterpart. The supplements remain the same lackluster set. Still, the overall package is enough for the remaining fanbase to sink their teeth into.

Sale Price 17.49
List Price 30.99
Buy Now
3rd Party 9.51
In Stock.
See what people are saying about this story or others
See Comments in Forum
Previous Next
Pre-Orders
Tomorrow's latest releases