In the Underworld, Vampires are a secret clan of modern aristocratic sophisticates whose mortal enemies are the Lycans (Werewolves), a shrewd gang of street thugs who prowl the city's underbelly. No one knows the origin of their bitter blood feud, but the balance of power between them turns even bloodier when a beautiful young Vampire warrior and a newly-turned Lycan with a mysterious past fall in love. Kate Beckinsale and Scott Speedman star in this modern-day, action-packed tale of ruthless intrigue and forbidden passion - all set against the dazzling backdrop of a timeless, Gothic metropolis.

When I was just a budding, twelve-year-old horror aficionado (sneaking gory scares over the weekend at friends houses), I remember imagining a cinematic clash between vampires and werewolves. Obviously, a generation of fans for flicks like 'Near Dark' and 'The Howling' shared the same imagination. But while dozens of tooth-and-claw screenplays swamped Hollywood throughout the '80s and '90s, sadly most of the projects fell apart before a reel of film was shot. As fate would have it, a decent incarnation of this pairing never received a legitimate treatment and the idea continued to fly under the radar for decades.

That is, until 'The Matrix' stormed theaters in 1999. Bizarrely enough, the insatiable desire for lead-flinging, leather-clad super freaks was the key to finally greenlighting Hollywood's first big budget, vampires-n-werewolves feature. Rookie writer/director Len Wiseman was the lucky gambler who hit triple sevens, as he just so happened to be selling a project that borrowed plenty of elements from 'The Matrix,' while also managing to pit horror's greatest heavyweights against each other. The result was a 2003 action-horror flick called 'Underworld.'

The film itself focuses on Selene (Kate Beckinsale), an icy, vampiric Death Dealer caught in a centuries-old war of deception and propaganda. Over the years, the war has evolved beyond the claw-to-claw battles of the past -- instead, modern technology and firepower has made this a war of distance and convenience. It doesn't hurt that a hibernating vampire named Viktor (Bill Nighy) has ensured his aristocratic coven with plenty of toys and riches to fuel their war with the werewolves. His chief lieutenant, Kraven (Shane Brolly), leads the clan's Death Dealers into the thick of battle with the thuggish Lycans, who dwell in the sewers and plot attacks against the vampires.

Meanwhile, Lucian (Michael Sheen), the central canine baddie, is attempting to genetically manufacture a strain of vampirism that can successfully create a werewolf/vampire hybrid. As it is, any time either creature tries to turn the other, the victim dies since their system can't integrate both diseases. Lucian is tracking a human named Michael Corvin (Scott Speedman), a young man who is oblivious to the raging war in his backyard. When Selene discovers their plot, she must stop the Lycans, discover the truth about their conflict, and strike a balance between the two clans. 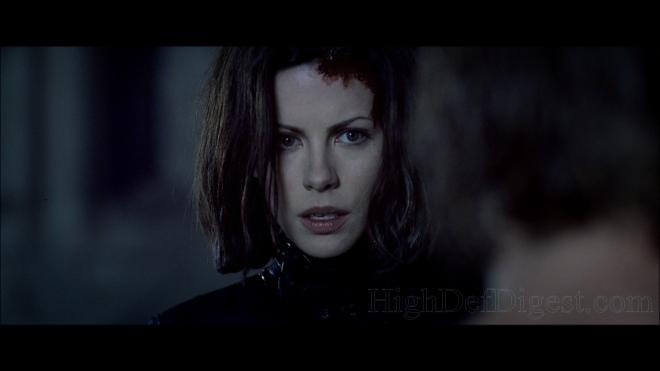 On the surface, 'Underworld' has a lot to offer action-horror fiends -- it features plenty of shootouts and tussles, stuntwork galore, and a nice dose of seamless effects work. The storyline is well developed and keeps things clipping along at a welcome pace, while the script itself isn't weighed down by heavy-handed dialogue. Last but not least, its lead actors are engaging (particuarly Nighy and Beckinsale), and the film's visual asthetic provides an eye pleasing, post-modern take on gothic designs through and through.

Unfortunately, a number of issues undermine these selling points, at least for a hardcore genre fan like myself. First off, in its most obvious nod to 'The Matrix,' most of the action in 'Underworld' is disappointingly limited to bullets and other weapons. While this would arguably be fine if there were a glut of vampire-vs-werewolf films already out there, I personally felt robbed of the opportunity to finally see a big-budgeted toe-to-toe clash that involved the natural abilities of both creatures. On the few occasions where the beasts fight do hand-to-hand, the results are short and uninspiring.

Speaking of uninspiring, the film's predictable use of a successful vampire/werewolf hybrid is surprisingly boring. Everyone comments on how much more powerful he is, but the on-screen action never seems to live up to its promise.

Then there's the film's average ending that blatantly leaves major plotlines unresolved until a sequel can settle them. In fact, by the time the credits roll, the entire film begins to feel like an extended prologue for Wiseman's eventual follow-up, 2006's 'Underworld: Evolution.'

But of all these issues, my biggest problem with the film is that despite all appearances, it really isn't a horror flick in any shape or form. Instead of focusing on a human stumbling on to a frightening conflict, we're forced to immediately side with one of the creatures. As a result, the tension and fear factor deflates long before the first act has run its course, and the film devolves into a pseudo-telling of Romeo and Juliet that places more emphasis on a contrived love story than on the war itself.

In the end, 'Underworld' is entertaining enough and certainly well-produced, but with so much promise, it's hard not to be disappointed by its merely average results. Although this one has a better story than its poorly conceived sequel, it still doesn't give horror fans the true titan clash we've been looking for.

Sony Pictures Home Entertainment brings 'Underworld' to 4K Ultra HD Blu-ray as a two-disc combo pack with a flyer for an UltraViolet Digital Copy and glossy slipcover. At the moment, we are unable to verify the size of the content, but the dual-layered UHD66 disc sits comfortably opposite a Region Free, BD50 disc inside a black, eco-elite keepcase. The regular Blu-ray includes the unrated extended cut with an additional 13 minutes of dialogue and superfluous bits of action. At startup, the disc goes straight to an interactive main menu that changes screens when switching between the usual options while music plays in the background.

The battle between werewolves and vampires comes out of hiding on Ultra HD Blu-ray furnished with a fine-looking and strong HEVC H.265 encode in HDR10.

The overall results are largely satisfying, looking noticeably sharper with slightly improved resolution and clarity in most scenes, but it also comes with its share of softer, blurry moments and several instances of mild aliasing throughout. Small objects in the vampire mansion are clear and resolute, and the details in the baroque furniture and the stone architecture of the city are plainly visible. Every stitch and thread is laid bare in the ornate gothic wardrobe of the vampires and the rugged clothing of the lycans while facial complexions exposed the faintest wrinkle and pore of the cast. Originally shot on 35mm, which was later mastered into a 2K digital intermediate, the 2.40:1 image is awash with a thin layer of natural, film-like grain, which is all the more perceptible here.

This UHD version is significantly brighter thanks to a higher dynamic range with intensely glowing whites. The light gleams off the latex outfits, water and spots of moisture with brilliant luminosity while specular highlights along the metallic edges of guns, cars and various other objects of silver pop with realism. Brightness levels are accurate and terrifically balanced, providing inky rich blacks and deep, penetrating shadows without sacrificing minor details. The heavily stylized photography of Tony Pierce-Roberts, unfortunately, doesn't allow for a varied palette. Nevertheless, with the source having been color graded for a wider gamut, reds appear fuller, blues more luminous and the few bits of gold and yellow shine with more realism and are more vivid than its Blu-ray counterpart.

Unfortunately, in spite of the supernatural soldiers being equipped with a Dolby Atmos soundtrack, the audio doesn't bode much better than the video, offering little improvement over an already excellent uncompressed PCM track heard on the 2007 Blu-ray.

On several occasions, the design makes great use of the ceiling speakers with pleasing directionality and movement across the entire room. The best moments, however, come in the second half when the battle begins to intensify and the vampires raid Lucian's underground lair. The sounds of combat and the barrage of gunfire reverberate off the concrete walls, and specific skirmishes heard discretely overhead. A few standout moments with debris and bullets flying everywhere create a fairly satisfying dome-like effect. Still, the majority of the atmospherics travel along the sides and into the rears, maintaining the same reference-quality soundfield heard before. But up until that second half, the space above is largely silent.

The real win in the movie's jump to the object-based format is a noticeably broader and more immersive soundstage thanks to various bits of activity moving into the front heights, generating a huge, half-dome wall of sound from start to finish. Channel balance and separation is excellent, as background noises move fluidly between the three speakers and convincingly off-screen. Only gripe is an oddly limited midrange, which admittedly doesn't make much sense. But the loudest segments are noticeably bright and ear-piercing with hints of distortion in the upper peaks. It seems as though someone turned up the volume while upconverting the track to the new codec. Nevertheless, conversations remain very well-prioritized and intelligible, and a thunderous, commanding low-end provides palpable weight to a few action sequences, even dipping into the ultra-low depths in the second half of the film.

After the success of 'The Matrix,' studios scrambled to recreate the same feat with a similar design and atmosphere, and Len Wiseman's 'Underworld' was one which stood out with its gothic, graphic novel look. Adding the twist of a millennium-old battle between vampires and werewolves, the end result is a generally satisfying and mostly entertaining production that has lived on through several sequels.

The Ultra HD Blu-ray arrives with a strong 4K video presentation, but unfortunately, it doesn't offer much of an upgrade over its Blu-ray counterpart, in spite of delivering an otherwise satisfying picture quality. On the plus side, the audio has been upgraded to Dolby Atmos, but it, too, doesn't offer much improvement over its predecessor. Accompanied by the same collection of supplements, the overall package is only worth checking out for fans and early adopters.

Sale Price 14.96
List Price 26.99
Buy Now
3rd Party 5.75
In Stock.
See what people are saying about this story or others
See Comments in Forum
Previous Next
Pre-Orders
Tomorrow's latest releases