The drama starring Will Smith is coming to Ultra HD Blu-ray in March.

In an early announcement to retailers, Sony is preparing 'Concussion' for Ultra HD Blu-ray on March 29.

Will Smith stars in 'Concussion,' a dramatic thriller based on the incredible true David vs. Goliath story of American immigrant Dr. Bennet Omalu, the brilliant forensic neuropathologist who made the first discovery of CTE, a football-related brain trauma, in a pro player and fought for the truth to be known. Omalu’s emotional quest puts him at dangerous odds with one of the most powerful – and beloved – institutions in the world. With captivating performances by Alec Baldwin and Academy Award® nominee Albert Brooks (1987 Best Supporting Actor, Broadcast News).

The Ultra HD Blu-ray will feature 4K video with HDR, a Dolby Atmos soundtrack, and supplements will include: Nine Deleted Scenes; "Crafting Concussion" Featurette; "Inside the True Story" Featurette; and Commentary with Director Peter Landesman.

You can find the latest specs for 'Concussion' linked from our Ultra HD Blu-ray Release Schedule, where it's indexed under March 29. 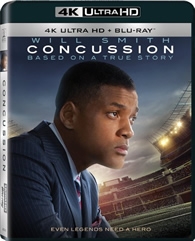