Accomplished pathologist Dr. Bennet Omalu (played by Will Smith) uncovers the truth about brain damage in football players who suffer repeated concussions in the course of normal play.

If for nothing else, ‘Concussion’ offers a unique take on a very familiar and often much too predictable genre. And yet, the plot, based on a 2009 GQ article by Jeanne Marie Laskas, nonetheless follows the standard sports drama template, performing many of the same routines and well-known maneuvers, and largely follows the customary plan of action. The quarterback in this scenario is Will Smith as Dr. Bennett Omalu, and he faces a very tough opponent, with possibly the best defensive line ever in the megagiant National Football League. For the most part, Smith leads his team of supporters, colleagues and allies to a minor victory against the team favored to win, as would be expected. And occasionally, the plays manage to impress and arouse a couple of cheer-worthy moments, but when coming to the final minutes, the overall game was played safe, never really taking any chances or risks, failing to surprise spectators and leave them with some sense of accomplishment. It’s a win in the end, but it’s ultimately a small one, not the championship.

The unique aspect the script, written and directed by Peter Landesman, brings to the genre is in taking the point of view of an outsider who has no emotional investment in the game. Not the standpoint of an entire team, a particular player or from the vantage point of a fan, but the story comes from the viewpoint of a man who doesn’t care for it and makes clear he doesn’t understand the public’s interest. Thus, Dr. Omalu is essentially an objective observer facing the toughest challenge of his life, against one of America’s most intimidating adversaries, which is precisely the sports drama blueprint. The Nigerian forensic pathologist doesn’t voluntarily and bravely meet the opposition in the same manner as someone who’s trained and practiced for it. Frankly, he just kind of stumbled upon a discovery that threatened the larger, more powerful organization simply because the body of former Pittsburgh Steelers center Mike Webster (David Morse) arrived during his shift. And as the filmmakers like to point out, almost to the point of becoming distractingly annoying, it’s Omalu’s objectivity that led to the discovery of a disorder he called chronic traumatic encephalopathy (CTE). 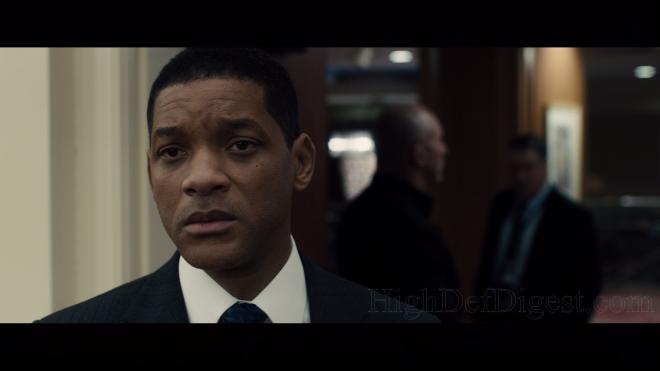 Ironically, this perspective is arguably the film’s downfall, because Omula’s foreignness is pushed with such frequency and prevalence that it begins to almost take on the feel of a hidden agenda, which obviously is not that well hidden when it’s this easy to point out. In fact, it is blatantly called out a couple times in scenes with Dr. Julian Bailes, played by Alec Baldwin with a strange coldness and indifference that’ll leave viewers uncertain of his motives, and much of that skepticism comes from Bailes being the former Steelers doctor who knowingly kept the health of players underwraps. Driving this point even further, hammering it into the heads of audiences perhaps as a way to leave them feeling similar effects of CTE, Hill Harper and Luke Wilson are brought in as Christopher Jones and NFL Commissioner Roger Goodell. They discredit Omula’s findings as the result of either an overzealous quack, one who’s not technically a medical doctor in the traditional sense or explicitly referring to his immigration status, as one football fan vehemently uses as a tool of insult.

To perhaps preemptively thwart this understanding of ‘Concussion,’ or possibly what the filmmakers would argue to be an misunderstanding, Landesman, whose other film credits include ‘Parkland’ and ‘Kill the Messenger,’ introduces audiences to Omula in the opening minutes inside a courtroom drama where he lists his various credentials. The faces of those listening to his impressive background are basically the same reaction some viewers are likely to have, but in also doing this, Landesman reveals just how scripted, intentional and ultimately fabricated the production is. There is little about this film which feels organic and evolving naturally from a genuinely human place, including Smith’s performance, which frankly, seems forced and artificial. As if calling attention to itself that the former rap artist, TV star and action-movie hero knows how to act. This is the typical David and Goliath story, except this giant is only assumed mighty, fearful foe while the underdog is made to wear a sign reminding audiences of his smallness. A rock has been thrown, but there is no actual battle to witness.

Sony Pictures Home Entertainment brings 'Concussion' to 4K Ultra HD Blu-ray as a two-disc combo pack with a flyer for a Digital HD Copy. At the moment, we are unable to verify the size of the content, or if the disc is dual-layered or tripled-layered. The new UHD disc sits comfortably opposite a Region Free, BD50 disc inside a black, eco-cutout case. At startup, the disc goes straight to the main menu with full-motion clips and music.

The sports drama debuts on Ultra HD Blu-ray, along with it’s day-and-date Blu-ray counterpart, giving early adopters the opportunity to compare the differences between the two. The only area of concern is the same as with all movies hitting the new format in its early stages: the condition and original quality of the source. In this instance, the presentation is the result of an upconverted 2K digital intermediate although the film was actually shot digitally in 3K, and it doesn’t appear to have been color graded for BT.2020 color gamut. Basically, it comes with some minor issues holding it back from a higher score. However, inspite of these noteworthy drawbacks, ‘Concussion’ arrives with a strong presentation that looks quite nice in the DCI color space.

Also worth noting when assessing the picture quality, the original photographic choices by the filmmakers pose some limitations, affecting the overall look and possibilities of what the format is capable of. Granted, the transfer is squeaky clean and generally spotless, but it still comes with that somewhat unattractive digital appearance, lacking the sort of grain texture that would give the movie some character. It’s not necessarily the soap-opera effect that's often distracting, but it’s just too smooth and sterile, which might turn off some viewers. Then there’s the fact that Salvatore Totino's cinematography is noticeably restrained, shooting with a gray, overcast tone that makes everything gloomy and somewhat lifeless.

Contrast is heavily subdued, contributing to the dreary look that interestingly complements the tragic, somber subject matter. On the other hand, whites are intensely brilliant and vibrant, displaying a clear difference between the clouds, button-down shirts and office furniture. Black levels are beautifully inky rich and pure with deep penetrating shadows that don't obscure the finer details. Being muted and controlled, however, the picture is rather flat during daylight exteriors, but nighttime sequences are genuine highlights, particularly extreme wide shots of the city skyline, which can easily serve as demo scenes for some viewers.

Colors are largely affected by the intentional look and feel of the video, which to some will be a negative while others might not care as much. The overall palette lacks life and doesn't really pop as would be expected of the new format with secondary hues often taking the hardest hit. This, then, hurts flesh tones, making the actors sometimes appear flushed and sickly in several spots. In truth, primaries remain accurate and cleanly rendered throughout, at least, in terms of regular high definition. But here, they’re really lackluster and largely seem dull, pushing lots of depressing blues and only the green of lawns displaying some small glimmer of hope.

But again, in spite of these minor limitations, the 4K presentation displays plenty of sharp details and excellent clarity. Fine lines and objects are distinct and crystal-clear in every scene. Whether the action is taking place in poorly-lit interiors or outside with the little bit of sunshine available, the lettering on books, papers and on signs hanging on the side of buildings in the distance are plainly visible. The video offers a nice uptick over its Blu-ray counterpart, but an A and B comparison doesn't really reveal a night and day difference. Nevertheless, worth mentioning are the several instances of aliasing along the sharpest edges of cars and buildings while some minor posterization rears its ugly head in some areas, making this UHD passable with some noteworthy drawbacks.

On the audio side of things, the movie licks its wounds and goes for the win with an excellent Dolby Atmos soundtrack, which at first, might some seem as though it wouldn’t offer much for a drama. But the designers did a surprisingly admirable job, bringing the movie alive and keeping viewers engaged. Admittedly, the track does not utilize the entire soundscape, but it nonetheless offers a highly amusing and satisfying soundtrack. The rears are often employed during certain scenes involving lots of activity, delivering a variety of atmospherics, such as the roaring cheers of football patrons or of the city. Ceiling speakers are also utilized on occasion, with one moment involving a helicopter flying overhead being a highlight. During quieter moments, subtle, carefully placed sounds of birds chirping and trees rustling in the wind are distinctly heard overhead and all around, generating a very satisfying soundfield.

Nevertheless, being a dialogue and character driven drama, much of the heavy lifting is done by the front channels, where more of those same sound effects are discretely and convincingly heard off-screen. Some of those cleverly placed noises move into the heights, creating a much wider and larger soundstage full of activity as it forms an often captivating half-dome effect. James Newton Howard’s score benefits the most, spreading across the entire screen and into the heights with minor bleeds into the surrounds. The mid-range exhibits distinct clarity and room-penetrating details, allowing for the subtle, poignant differences in the orchestration to come through cleanly. Character interaction and conversations, no matter how soft or whispered, are well-prioritized and precise. The lossless mix can also be impressive at times in terms of bass, hitting hard with palpable weight and presence in certain scenes, much of it, of course, related to the music or the few bits of suspense.

Inspired by the 2009 GQ article, which was based on real-life events, ‘Concussion’ tells the story of the doctor who challenged the powerful National Football League with evidence of brain damage related to the game. Starring Will Smith, the story plays the standard sports drama routine with a unique spin but finishes the game with the same predictable, and ultimately unsatisfying, conclusion.

This Ultra HD Blu-ray arrives with a strong 4K video presentation, but unfortunately, it also appears to be plagued with a couple of noticeable issues and in spite of delivering some pop, it’s not quite wholly satisfying. On the plus side, the audio presentation is excellent, accompanied by a small collection of supplements, making the overall package worth checking out for fans and early adopters enthusiastic about the new format.

Sale Price 19.99
List Price 26.99
Buy Now
3rd Party 19.96
In Stock.
See what people are saying about this story or others
See Comments in Forum
Previous Next
Pre-Orders
Tomorrow's latest releases