The first season of the Netflix drama is coming to Blu-ray. You can pre-order the show here.

In an early announcement to retailers, Sony is preparing 'Bloodline: Season One' for Blu-ray sometime in the near future.

'Bloodline' is a dramatic thriller that explores the demons lurking beneath the surface of a contemporary American family. The Rayburns are hard-working pillars of their Florida Keys community. But when the black sheep son comes home for the 45th anniversary of his parents' hotel, he threatens to expose the Rayburns' dark secrets and shameful past, pushing his siblings to the limits of family loyalty.

You can find the latest specs for 'Bloodline: Season One' linked from our Blu-ray Release Schedule, where it's indexed under PENDING. 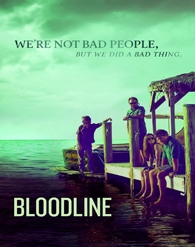 Discs mentioned in this article: (Click for specs and reviews)
Bloodline: Season One (Blu-ray)