All six seasons of the critically-acclaimed series will be available in a collectible Blu-ray set this October.

In an early announcement to retailers, Sony will be releasing 'Justified: The Complete Series' on Blu-ray on October 13.

For six electrifying seasons, no crime series proved more combustible than the Peabody Award-winning Justified. At the explosive center of the action, Western-style, Stetson-wearing, gun-slinging U.S. Marshal Raylan Givens (Timothy Olyphant) confronts murder, drugs, bank heists, mobsters, crime families, corrupt politicians and even his own tumultuous past – and never backs down. His ultimate adversary is the cunning, complex outlaw Boyd Crowder (Walton Goggins), but the real wild card is Ava Crowder (Joelle Carter), the mysterious woman torn between the two men and both sides of the law. From creator Graham Yost and based on legendary author Elmore Leonard's crime novella "Fire in the Hole," it all leads to a perfectly unexpected final showdown.

The 18-disc Blu-ray set will have all extras included on the previous releases, plus many new features: That's a Wrap Gag Reel, Three All-New Featurettes; Writers' Room Tour with Graham Yost; Leaving Harlan Alive: Making the Final Season; Harlan Revisited: Favorite Moments; In Elmore's Words - featuring actors, who worked with Elmore Leonard, reading select passages from some of his most well-known pieces of work; as well as a Justified Flask and a Commemorative Disc Book all in collectible packaging.

You can find the latest specs for 'Justified: The Complete Series' linked from our Blu-ray Release Schedule, where it is indexed under October 13. 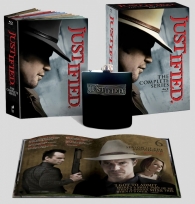