In an early announcement to retailers, Sony is prepping Jumanji for 4K Ultra HD Blu-ray on December 5. In addition, the 4K restoration will also serve as the basis for a new Blu-ray edition available that same day.

Robin Williams, Kirsten Dunst and Bonnie Hunt star in this phenomenal adaptation of the award-winning children’s book. When young Alan Parrish discovers a mysterious board game, he doesn’t realize its unimaginable powers, until he is magically transported before the startled eyes of his friend, Sarah, into the untamed jungles of Jumanji! There he remains for 26 years until he is freed from the game’s spell by two unsuspecting children. Now a grown man, Alan (Williams) reunites with Sarah (Hunt) and together with Judy (Kirsten Dunst) and Peter (Bradley Pierce) tries to outwit the game’s powerful forces in this imaginative adventure that combines breathtaking special effects with an enchanting mixture of comedy, magic and thrills.

The Ultra HD Blu-ray will feature 2160p video with HDR and a Dolby Atmos soundtrack. Supplements will include:

Suggested retail price for the Ultra HD Blu-ray is $30.99.

You can find the latest specs for Jumanji linked from our Blu-ray and 4K Release Schedules, where it is indexed under December 5. 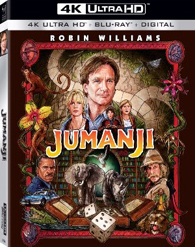