The drama starring Idris Elba, Gemma Arterton, and Ryan Gage is planned for Blu-ray in March.

In an early announcement to retailers, Sony is preparing '100 Streets' for Blu-ray on March 7.

100 Streets, a powerful ensemble drama, follows three contrasting and interwoven stories as they play out in one square mile of modern day London. A former rugby player, Max (Idris Elba), struggles to find a life off the field while fighting to save his marriage to former actress Emily (Gemma Arterton). Kingsley (Franz Drameh) is a small time drug dealer desperately seeking a way off the street. While completing his community service for a misdemeanor, Kinsley meets Terence (Ken Stott), a local thespian, who gives him the push he needs out of his dead end life and into a very different, creative world. George (Charlie Creed-Miles), a cab driver, and his wife Kathy (Kierston Wareing) dream of having kids, but a devastating road accident puts their hopes on hold even testing their otherwise strong marriage. Anybody can make a wrong turn, but it's the journey that allows us to find the right path.

Specs have yet to be revealed, but supplements include A Look Inside 100 Streets.

You can find the latest specs for '100 Streets' linked from our Blu-ray Release Schedule, where it is indexed under March 7. 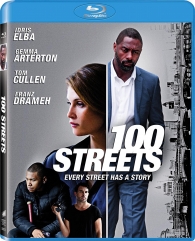