The action-thriller starring Harrison Ford will land on the 4K runway this November.

As previously reported, Sony is set to release Air Force One on 4K Ultra HD Blu-ray on November 6.

The fate of the nation rests on the courage of one man. Harrison Ford and Gary Oldman star in two-time Oscar nominee Wolfgang Petersen's (Best Director & Best Writing, Screenplay Based on Material from Another Medium, Das Boot, 1981) gripping thriller about an uncompromising U.S. President who has just told the world he will not negotiate with terrorists. When Russian neo-nationalists hijack Air Force One, the world's most secure and extraordinary aircraft, the President is faced with a nearly impossible decision to give in to terrorist demands or sacrifice not only the country's dignity, but the lives of his wife and daughter.

The release will include a 4K REMASTER FROM THE OCN, featuring High Dynamic Range with exclusive Dolby Atmos audio track and supplements include an Audio Commentary with Director Wolfgang Petersen.

You can find the latest specs for Air Force One - 4K Ultra HD Blu-ray linked from our 4K Blu-ray Release Schedule, where it is indexed under November 6. 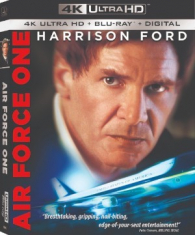