Starring Harrison Ford and Gary Oldman, Wolfgang Petersen's Air Force One is certainly one of the better Die Hard knockoffs that flooded theaters in the 90s, and it remains genuinely entertaining twenty years later. The action thriller safely lands on the Ultra HD runway with a beautiful 4K HDR10 presentation, a highly-satisfying Dolby Atmos soundtrack, but the same disappointing set of supplements. Still, the overall package is Worth a Look.

There was a time, not too long ago, when Die Hard was its own genre.

It's within this cozy sub-genre that we find Air Force One, Wolfgang Petersen's take on Die Hard on Air Force One. (David Letterman, at the time of the film's release, was fond of calling it "The Ass-Kicking President.") The film opens with a tactical military operation which results in the capture of the terrorism-supporting leader of Kazakhstan. Next, we see the President of the United States (Harrison Ford) giving a speech in Moscow that outlines the United States' zero tolerance approach to terrorism. Soon after, while flying home on his famous jet, the President finds himself at the mercy of Russian terrorists. That's pretty much the whole movie.

The cast is rounded out by an impressive assortment of character actors. Gary Oldman, true to form, plays the slimy Russian hijacker. William H. Macy is a member of the president's cabinet (on the plane), Glenn Close is the Vice President (on terra firma), Dean Stockwell is the Secretary of Defense (with Close on terra firma), and Jurgen Prochnow plays General Ivan Radek, the baddie whose capture sets the events of the film in motion. 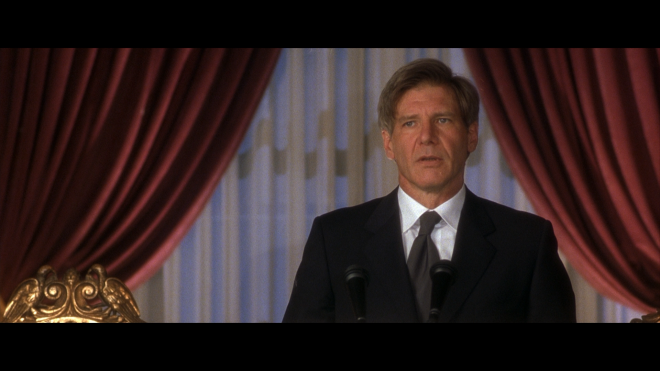 Director Wolfgang Petersen is a talented dude, there's no doubt about that. Air Force One forgoes the choppy, cut-cut-cut style of the time, instead of going for a more leisurely pace with longer sustained shots. The overall effect is elegant but can also be quite draggy (the search for the President's escape pod goes on forever, especially because, if the President wasn't on the plane, the movie would be pretty much over). Quite frankly, while this more luxuriant style is refreshing, it also, in the age of Jason Bourne and 24, seems almost impossibly slow and uninvolving.

It's not a bad movie, per se, but it's not exactly good either. And man, oh man, have effects come a long way since this thing came out. Not only do the fighter jets move through the air with all the realism of an X-wing, but there's a climactic crash on the water that looks so phony that I had to shriek out, "That's why they need to bring models back!"

Besides the pacing and effects issue, the movie also seems incredibly dated from a political point of view; Air Force One is very, very Clinton era. It's almost inconceivable to think that a movie like this could have been made during the George W. Bush era. [This is] a youngish, charming President who has a steadfast overseas policy stance but is a warm family man, one who pretty much everyone loves. If something like this had come out after Bush Jr. got into office, it probably would have been laughed (or booed) off the screen. Air Force One came out at a time when being the President was heroic enough.

Sony Pictures Home Entertainment brings Air Force One to Ultra HD Blu-ray as a two-disc combo pack with a code for a Digital Copy. When redeeming said code via sonypictures.com and MoviesAnywhere, users are only granted access to a 1080p HD copy with Dolby Digital audio. The dual-layered UHD66 disc sits comfortably opposite a Region Free, BD50 disc, and both are housed inside a black, eco-cutout case with a glossy slipcover. At startup, viewers are taken to a static interactive menu screen that changes when switching between the usual options while music plays in the background.

Wolfgang Petersen's political action thriller makes a smooth landing on the Ultra HD runway thanks to an excellent HEVC H.265 encode that safely delivers a notable upgrade over the Blu-ray. Reportedly sourced from a brand-new 4K remaster of the original 35mm camera negatives, the 2160p transfer shows better overall definition and clarity with a few noteworthy sequences that are more striking than others. Background objects decorating the plane are highly-detailed and lettering is distinctly legible while the wrinkles and stitching on clothing are very well-defined and close-ups of the entire cast are highly revealing. As would be expected from a twenty-year-old feature, the picture comes with its share of softer, poorly-resolved moments, and the early CG effects now look significantly dated, shoddy and stick out like a sore thumb. Added to that, a couple scenes show evidence of some near-negligible DNR and very mild, blink-and-you'll-miss-it aliasing along the sharpest edges.

But on a more positive note, the 4K video flies the not-so-friendly skies with noticeably brighter contrast, making the action and thrills feel fresh and rejuvenated. Beneath an ultra-fine layer of natural grain, whites are crisper with significantly more brilliance in the most intensely blazing moments, such as in the various light fixtures or scenes of explosions. Specular highlights are, frankly, more of a mixed bag with some spots displaying a radiant sparkle and tighter glow along metallic surfaces, but there really isn't any better detailing and clarity within those intensely bright areas. Brightness levels, on the other hand, are a tad richer and fuller, supplying a few sequences with inkier midnight blacks. Although shadows can sometimes look slightly dull and murky in a couple sequences, they are, for the most part, smooth and silky with excellent delineation in the darkest corner, providing the 2.39:1 image with appreciable dimensionality and a lovely cinematic appeal.

The biggest and best upgrade is, of course, the overall cinematography and color palette. The HDR10 presentation is showered with richly-saturated primaries throughout, from the glowing candy red and brilliantly admiral blue buttons of the airplane's computer panels to the sapphire blue of the plane's exterior and the beautiful cerulean-violet blend in the early morning sky. Secondary hues are bit more nuanced and subtler, but the difference is nonetheless evident, especially the mix of various earthy browns in the plane's interior, like the peanut color of some leather chairs versus the coffee mocha shade of wood panels and the dark cherry reds of the glossy tables. Yellows also seem more accurate and true-to-life, giving the sun's morning rays a lovely buttery glow and an intense fiery golden hue to the orange-red explosions. Facial complexions appear more natural with lifelike textures and a welcomed peachy rosiness, making the overall video a fantastic upgrade over its HD SDR counterpart. (4K HDR10 Video Rating: 82/100)

Petersen's Die Hard knockoff on Air Force One is hijacked by a terrific and highly capable Dolby Atmos soundtrack that nicely improves on an already outstanding TrueHD track enjoyed on the Blu-ray. Surrounds are continuously employed in a variety of ways, from subtle ambient effects like the bustling commotion aboard the plane to more aggressive activity like the loud, crackling grumble of jet fighters. Such moments display excellent directionality and flawless panning from the rears and sides to the fronts and vice versa, generating an enveloping 360° environ that's marvelously satisfying. Many of those atmospherics also fluidly travel into the overheads on several occasions, most notably in the last quarter of the movie when the action intensifies. Even during quieter sequences aboard the plane, the ceiling channels are often employed to maintain an immersive hemispheric soundfield.

The sound design also benefits from the extra breathing room across the entire front soundstage, as background noises move between the three channels and off-screen effortlessly, providing the movie with a highly-engaging sense of spatial presence. The only issue of concern is a somewhat limited mid-range that, at times, seems too bright, exhibiting a bit of distortion during the loudest, most chaotic sequences and explosions while also feeling clipped in the upper frequencies. This was an issue with its lossless counterpart, but for the most part, the object-based option maintains strong clarity and good fidelity while cleanly prioritizing the vocals above the most ear-piercing moments. The low-end isn't particularly impressive or memorable, but the bass is adequate with some satisfying room-shaking oomph and heft where it matters, making the high-rez track a fun addition. (Audio Rating: 88/100)

The UHD shares the same commentary track heard on the Blu-ray, but Sony also throws in the original theatrical trailer for good measure.

Of all the Die Hard knockoffs that flooded theaters throughout the 1990s, Wolfgang Petersen's Air Force One is certainly one of the better imitators, a political action thriller that actually delivers while surprisingly feeling fresh and original. Starring Harrison Ford and Gary Oldman representing opposing forces in the aftermath of a post-Cold War reality, the film remains genuinely entertaining twenty years later, garnering a well-earned following. The action thriller safely lands on Ultra HD with a beautiful 4K HDR10 presentation that improves on its HD SDR counterpart and a highly-satisfying Dolby Atmos soundtrack that will rock home theaters. Porting over the same disappointing selection of supplements as the Blu-ray, the overall UHD package is nonetheless worth a look.

Sale Price 14.96
List Price 26.99
Buy Now
3rd Party 6.49
In Stock.
See what people are saying about this story or others
See Comments in Forum
Previous Next
Pre-Orders
Tomorrow's latest releases