The animated sequel will hit home video in November.

Sony says The Angry Birds Movie 2 will be available on 4K Ultra HD Blu-ray and Blu-ray on November 12.

The flightless angry birds and the scheming green piggies take their beef to the next level in The Angry Birds Movie 2! When a new threat emerges that puts both Bird and Pig Island in danger, Red (Jason Sudeikis), Chuck (Josh Gad), Bomb (Danny McBride), and Mighty Eagle (Peter Dinklage) recruit Chuck's sister Silver (Rachel Bloom) and team up with pigs Leonard (Bill Hader), his assistant, Courtney (Awkwafina), and techpig, Garry (Sterling K. Brown), to forge an unsteady truce and form an unlikely super team to save their homes.

ALL NEW MINI MOVIE! - "Live Stream": When Silver attempts her first livestream, Red is the ultimate Angry Bird while the adorable Hatchlings get into mischief.

"Bird Watching": In this hilarious "birds-eye" view of the real-life species that inspired the artists, we take a trip to the LA ZOO to get up close and personal with real-life Mighty Eagles, Blue Birds, Toucans, and more. With fun reactions from the cast intercut throughout the piece - get ready to laugh, learn and meet some amazing avian friends

"Hatching the Hatchlings": The Hatchlings are soooooo cute! And in Angry Birds 2, we get to join them on their very own adventure! Meet these mischievous little troublemakers as we talk to filmmakers about the creation of the Hatchlings and their expanded storyline in the film, and hear from cast members about their love for these adorable baby birds.

"Happy Thanks-pigging": Zeta is not a fan of the traditional Thanksgiving menu!

"Jingle Birds: A Holiday Song From The Cast of Angry Birds 2": Sing along with Rachel Bloom and Jason Sudeikis with a new twist on this holiday classic.

You can find the latest specs for The Angry Birds Movie 2 linked from our 4K and Blu-ray Release Schedules, where it is indexed under November 12. 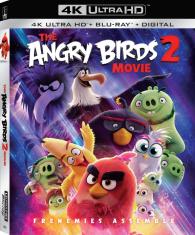 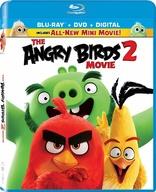