The aptly-named The Angry Birds Movie 2 is a silly and fun follow-up to the 2016 CG-animated hit with eagles joining the furious fray and an endearingly touching story. The sequel hatched on Ultra HD with a reference-quality 4K HDR10 presentation, an enjoyable Dolby Atmos soundtrack and the same set of supplements as the Blu-ray. Still, the overall package makes a Recommended addition to the 4K UHD library.

As a sequel to the surprise 2016 CG-animated hit, which was based on the popular game app, I half expected the feathered critters of The Angry Birds Movie 2 to be, you know,  angrier. Or at the very least, the birds would be a bit more perturbed given how the first movie ended. Granted, the sequel does open with furious Red (Jason Sudeikis), speedy Chuck (Josh Gad) and explosive Bomb (Danny McBride) sling-shooting attacks upon Piggy Island in retaliation to those events inflicted by King Leonard Mudbeard (Bill Hader) and his swinish followers. And they funnily return in kind with pies and sacks full of crabs. But somehow, this follow-up, picking up three years later, feels relatively tamer while weirdly maintaining the same level of energy and comedy as before. That's not to suggest it's a bad thing because in all honesty, it's more an unexpected and welcomed joy, making it a satisfying follow-up.

From a script by a trio of relative newcomers, the plot charmingly expands on the first with the inhabitants of Bird Island regarding Red as a national hero and treasured leader. Their appreciation, however, almost rises to a cult of personality level with posters of the bushy-eyebrowed cardinal — idealized in worship-like images nearly reaching the heights of propaganda — and vocal admiration heard throughout. Naturally, the endless praise gives our temperamental hero a sense of responsibility, purpose and recognition in a town that previously turned him into an outcast. The first quarter of the movie comically tours the island, showing birds using enormous sling-shots as a mode of transportation, another of Red's influence. Arguably, the highlight is the speed-dating sequence where Bomb and Chuck feel right at home, but Red is triggered by the intelligent and inquisitive Silver (Rachel Bloom), exposing a fragile ego that, perhaps accidentally, also lays bare a predictable conclusion. 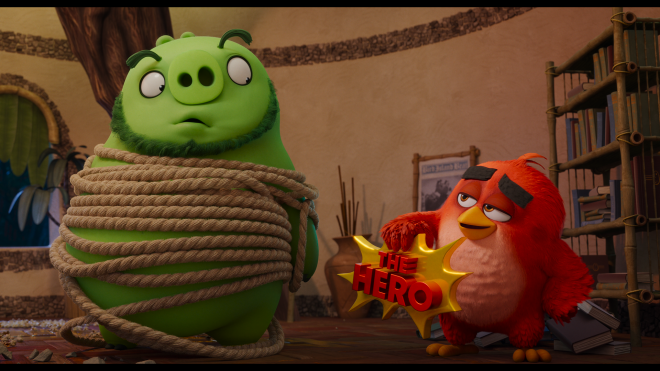 When the diurnal birds of Eagle Island join the fray, led by the rather beautifully inflamed Zeta (Leslie Jones), Red is forced into a truce and alliance with Mudbeard. This not only further ruffles his feathers, but in working as part of a team, it also endangers his venerated stature among the birds as well as his place of the heroic leader. Or at least, it is a threat from his perspective, which is where the story makes for a delightfully endearing and thoughtful watch. As things progress, revealing Zeta's obsession with turning the other two islands into vain, self-seeking coastal resorts, the giant ice balls with hot, burning lava centers take on a more metaphorical significance. While Zeta learns to heal from past traumas, Red confronts his fears guiding his decision-making. It's a worthwhile and touching theme for the little hatchlings in the audience, adding unexpected value to the animated silliness and raging feathered fun.

Sony Pictures Home Entertainment brings The Angry Birds Movie 2 to Ultra HD Blu-ray as a two-disc combo pack with a flyer for a Digital Copy, which can be redeemed via sonypictures.com and Movies Anywhere. When redeeming said code, users have access to the 4K Dolby Vision version with Dolby Digital Plus 5.1 audio. The triple-layered UHD100 disc sits comfortably opposite a Region Free, BD50 disc inside a black, eco-elite vortex case with a glossy slipcover. At startup, the disc goes straight to an interactive main menu that changes screens while toggling between the usual options while music plays in the background.

The birds and the pigs find common ground to mend broken hearts on Ultra HD with a gorgeous, often stunning demo-worthy HEVC H.265 encode, supplying the sometimes contentious union with a welcomed uptick in the definition. Coming from a 2K digital intermediate, the 2160p transfer shows sharper detailing in the ultra-fine lines of individual feathers and the unique features of the homes on each island. We can plainly make out every crack, fracture and imperfection in the ice of Zeta's arctic mountain. With improved overall contrast brightening every scene, whites shine with more luminous intensity and brilliance. At the same time, there is a better lustrous crispness and notably tighter glow in the specular highlights, as seen in the radiant sparkle of each ice crystal in the snow or the way the sunshine glistens off the ocean and icy surfaces in Zeta's weapon lair.

Likewise, brightness levels enjoy a pronounced boost, bathing the action in silkier and opulent blacks while showing extraordinary gradational differences between the various shades. Along with inkier, velvety shadows penetrating deep into the screen, the 1.85:1 image comes with an excellent three-dimensional sense of space while allowing for better detailing in Bomb's feathery body and Red's big, bushy eyebrows. The freshly-minted HDR10 presentation also lavishes the action in a brighter, strikingly more sumptuous array of colors. Compared to its HD SDR counterpart, the reds and greens of birds and in the surrounding foliage are fuller and a bit more energetic while the blues in the sky, waters and ice are more spirited and varied. However, the 4K video's more impressive aspect is the richer and dramatically abundant array of secondary hues, a kaleidoscopic feast for the eyes showering Eagle Island in dynamic purples, lively pinks and various soft pastels. (HDR10 Video Rating: 96/100)

The battle to unite the islands erupts in home theaters with an enjoyable and overall satisfying Dolby Atmos soundtrack that brings the sling-shot action and trio of angry island critters to life.

Like its DTS-HD brethren, a majority of the action is confined to the fronts, as a variety of the background activity bounces between three channels and into the top heights with fluid, flawless movement. Bringing the animated action to life, imaging is continuously busy with birds and objects flying from one side of the screen to the other, generating a spacious half-dome soundstage with sharp, crystal-clear definition in the mid-range. Heitor Pereira's score and song selections enjoy slightly improved acoustic detailing and warmth, turning the fun visuals into an effectively engaging wall of sound. Vocals remain precise and very well-prioritized during the loudest segments, and the low-end provides a deep and palpable presence to the action and music with a couple welcomed moments of wall-rattling rumbles.

Where the Atmos track is arguably lacking compared to other object-based mixes is in the ceiling activity. As with the Blu-ray, surrounds are relatively quiet although a few ambient effects can be randomly heard here and there while also failing to generate a wider environ. Admittedly, some sporadic atmospherics, namely the gigantic ice balls flying through the air, flawlessly pan overhead and across the room while large debris very lightly rains down the listening area. The sides and rears, however, are put to better, more convincing use in expanding the soundfield and enveloping the room. But in the end, such moments are far and few in between and not particularly immersive enough to compare to better audio tracks. (Dolby Atmos Audio Rating: 80/100)

The sequel lands on Ultra HD with the same set of bonus material as the Blu-ray.

The unexpected CG-animated hit of 2016 hatches a sequel, the aptly-named The Angry Birds Movie 2, that is as entertainingly silly and fun as its predecessor. Starring a large ensemble of voice talents, the story ruffles more than just the feathers of the franchise's cardinal hero by introducing Eagle Island and another angry avian villain, making for a strong follow-up with a touching, endearing theme for all the little hatchlings in the audience. A few eggs are cracked on Ultra HD with a stunning, reference-quality 4K HDR10 presentation that beautifully improves on its HD SDR counterpart, complemented by an enjoyable Dolby Atmos soundtrack. Porting over the same set of supplements as the Blu-ray, the overall package nonetheless makes a recommended addition to the 4K UHD family.