Sicario: Day of the Soldado Announced for Blu-ray and 4K Ultra HD Blu-ray

The thriller starring Benicio Del Toro and Josh Brolin will raid both formats in October.

UPDATE 8/29/18: Sony has now informed us that the 4K Ultra HD Blu-ray WILL NOT include Dolby Vision. The Dolby Vision listing on the original press release was an error. Instead, the disc will feature HDR10.

Previous Report: In an early announcement to retailers, Sony says Sicario: Day of the Soldado will be available on Blu-ray and 4K Ultra HD Blu-ray on October 2.

In Sicario: Day of the Soldado, the series begins a new chapter. In the drug war, there are no rules – and as the cartels have begun trafficking terrorists across the US border, federal agent Matt Graver (Josh Brolin) calls on the mysterious Alejandro (Benicio Del Toro), whose family was murdered by a cartel kingpin, to escalate the war in nefarious ways. Alejandro kidnaps the kingpin's daughter to inflame the conflict – but when the girl is seen as collateral damage, her fate will come between the two men as they question everything they are fighting for.

The 4K UHD will feature Dolby Vision HDR10 and a Dolby Atmos soundtrack, and supplements on both releases include:

"From Film to Franchise: Continuing the Story"

"An Act of War: Making Sicario: Day of the Soldado"

"The Assassin and the Soldier: The Cast & Characters"

You can find the latest specs for Sicario: Day of the Soldado linked from our Blu-ray and 4K Release Schedules, where it is indexed under October 2. 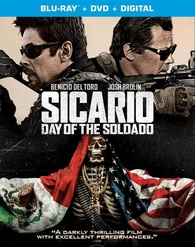 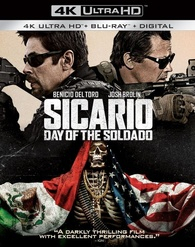