The World Series champs will slide into home on Blu-ray in December.

In an early announcement to retailers, Shout Factory is preparing '2016 World Series Champions: Chicago Cubs' for Blu-ray on December 6. In addition, a Collector's Edition will be released on December 13.

'2016 World Series Champions: Chicago Cubs' - All droughts end with rain. The cleansing washes away all of the curses and superstitions and improbable losses. The Chicago Cubs ended their drought. Fly the W! The Cubs are 2016 World Series champions! The 2016 Fall Classic was the end of a long road. Generations of families and friends celebrated cherished memories newly washed by a championship. And it was, perhaps even the beginning of a new kind of journey for the Cubs and their fans. Owner Tom Ricketts and General Manager Theo Epstein collaborated to shape a staff and team that could pull off the most epic of championships. With a powerful combination of talent and grit, Manager Joe Maddon’s cast of Kris Bryant, Anthony Rizzo, Javier Baez, Jake Arrieta, Dexter Fowler, Jon Lester and World Series MVP Ben Zobrist, the Cubs played better baseball than the Giants and Dodgers to set up a historically dramatic World Series against the Indians. Of course, it would come down to a Game 7 full of surprise, anxiety, and excitement. The Cubs would overcome a tenacious Indians comeback, using a mythical rain delay, inspirational speech, and an extra inning of baseball to crown a 103-win season with a World Series title. All the way, Cubs. All the way. This historic official film from Major League Baseball presents the exciting story of the Chicago Cubs 2016 World Series championship run through comprehensive highlights, exclusive access and interviews, and breathtaking footage. 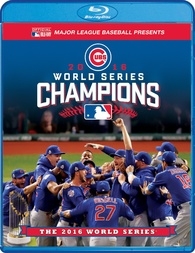 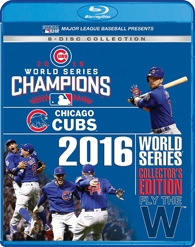 You can find the latest specs for '2016 World Series Champions: Chicago Cubs' linked from our Blu-ray Release Schedule, where it is indexed under December 6.