While the consumer electronics market has been relatively quick and enthusiastic about making the jump from SD to HD to Ultra HD video, the industry has seen a slightly different trajectory when it comes to digital audio over the years. With the increasing popularity of compressed MP3 files and bandwidth limited streaming music services, for the most part, the way we listen to music has actually been regressing when it comes to quality.

Thankfully, manufacturers and content providers are now starting to sing a new tune when it comes to audio gear and music playback. I mean, why should only digital movies benefit from higher bitrates and less compression? Aren't our ears just as important as our eyes? We can finally watch 'Lawrence of Arabia' with the high quality video it deserves on a digital format, but shouldn't we also be able to listen to The Rolling Stones with the high quality audio they deserve as well?

In an effort to tap into the growing digital audiophile market, while simultaneously trying to extend that appeal to more mainstream music listeners, several companies are now starting to embrace high-resolution audio components in a big way. With high-res audio, listeners are treated to lossless digital audio files at up to 24bit/96kHz. By avoiding lossy compression methods (like MP3), high-res audio tracks retain greater dynamic range and frequency responses, letting music fans hear their favorite tracks undiluted. CES saw the arrival of many new high-res audio products, and now Sharp is ready to embrace the technology wholeheartedly with the SD-WH1000U, bringing a full wireless high-resolution audio solution to living rooms and home theaters. 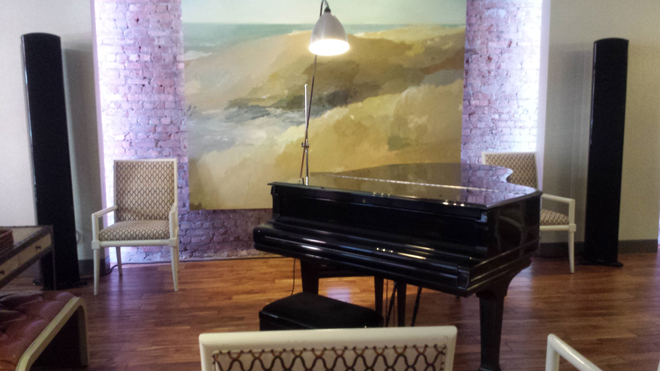 Last week, High-Def Digest was invited to demo the versatile new player in Sharp's swanky (a piano makes any space classy, doesn't it?) listening setup at the Savant NYC Experience Center. In the elegant and modern living room style locale, we were treated to several demonstrations of the player's high-res audio quality capabilities and vast feature set, giving us an impressive glimpse of what buyers and custom installers can come to expect from the product.

The SD-WH1000U is a fully featured wireless high-resolution music player and home theater hub, serving as an extensive audio/video solution primarily geared toward installers and integrators. The player features a custom honeycomb disc drive that includes support for Blu-ray, DVD, and SACD, as well as integrated NJR/JRC Muse Op Amps, and an ESS9018 DAC. 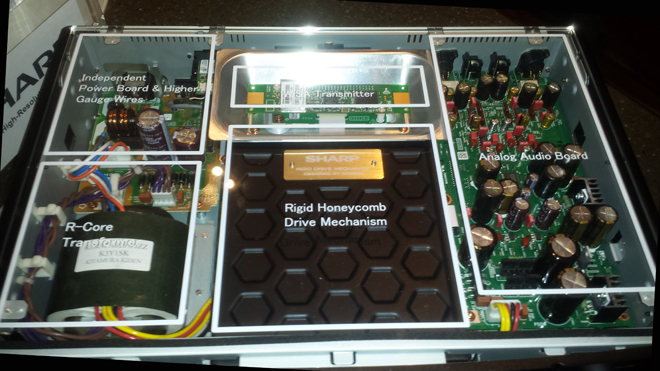 Using the WiSA (over 5.2-5.8 GHz band) and WiHD standards, the device is capable of wirelessly transmitting up to 1080p video and up to 7.1 channels of high-resolution audio. To achieve wireless audio playback, consumers can simply pair the device with WiSA capable speakers (like models offered from Bang and Olufsen), or with any pair of speakers or audio equipment using a separate Sharp Wireless Bridge (one per channel). To achieve wireless video playback, users simply need to attach the included WiHD dongle to their display device -- which is perfect for projectors or TVs placed in unconventional locations.

In addition to offering support for full wireless options, users can also mix and match wired and wireless equipment. For instance, if a customer already has a wired 5.1 speaker and receiver setup but wants to add two additional rear speakers to create a 7.1 setup, they can just add two WiSA speakers to the configuration without having to worry about additional wires.

To show off the SD-WH1000U's vast capabilities as both a high-resolution audio player and a wireless home theater hub, Sharp offered a few demos of music tracks and Blu-ray content. For demo purposes, the music was played through two large floor standing McIntosh speakers with Sharp Wireless Bridges, and the video was sent to a Sharp television. Playback was controlled from a tablet using the Sharp app.

For the audio-only samples, we listened to a few Blu-ray Pure Audio discs and several FLAC files from a USB drive, all wirelessly transmitted to the speakers from the player. Songs from artists like Jeff Beck, Nirvana, Otis Redding, and Paul Simon were played, and the high-resolution 24-bit/96kHz music files did not disappoint. Each track had a full, wide presence that maintained crisp highs and full-bodied lows, at both loud and soft volume levels without distortion. Separate instruments, vocals, and layers within the recordings were easily distinguishable. And though not every music style is poised to show off the benefits of high-resolution mastering and encoding (Nirvana's trademark grunge sound, in particular), the eclectic style of Paul Simon's Graceland was a real standout, revealing fantastic dynamic range.

To demonstrate the wireless video feature of the player, a Blu-ray concert disc was transmitted to a television on the other side of the room (about 30 feet away) which was connected to a WiHD dongle (included with the player). 1080p playback was smooth with no lag or signs of compression. In other words, the player appeared to work exactly as advertised -- and while most home theater users likely won't need to take advantage of a wireless video setup, it's a great option for custom installers and projector systems.

Unfortunately, as impressive as the listening demos were, Sharp would not offer any direct MP3 to high-resolution audio comparisons. To this end, the Sharp representative admitted that the differences between a compressed and lossless audio file are not always readily apparent during a quick A/B comparison. Instead, the nuances and added benefits of the extended dynamic range and frequency response take more time to appreciate. While this may sound like a cop-out, there is indeed some truth to this reasoning, and most audiophiles who have tried to go back to MP3s after spending a lot of time with high-resolution music files know just how substantial the upgrade in quality can be with certain tracks on high-end equipment.

After listening to a few music samples and getting a better feel for its many wireless home theater features, I definitely came away impressed by the Sharp SD-WH1000U. For users looking to setup a high-end music system or home theater room with high-resolution audio support and minimal use of pesky wires, this really is an attractive all-in-one solution that offers Blu-ray, SACD, USB, home network playback, and more.

With that said, there are some caveats that potential buyers should be aware of. Though the unit's HDMI 2.0 connection can technically pass-through wired 4K video (from a connected streaming player or future Ultra HD Blu-ray player), the device does not currently support HDCP 2.2 copyright protection. Likewise, the system does not include integrated Dolby Atmos or DTS:X playback, meaning that users will still have to connect the player to a separate receiver to make use of those formats. Finally, this system truly is a premium product and comes with an equally premium price tag. The SD-WH1000U costs around $5,000 and the VR-WR100U Wireless Bridges sell for $999 each. This means that customers who want full wireless 7.1 capabilities with their existing traditional speakers can expect to pay around $13,000. 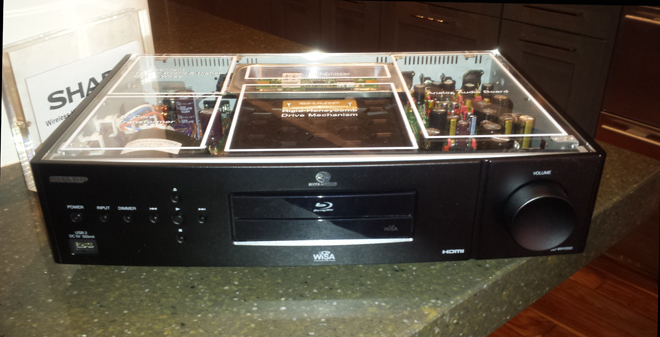 Still, professional installers and audiophile consumers who want a premium wireless high-resolution audio system and a fairly robust home theater hub, should definitely consider checking out the Sharp SD-WH1000U. If nothing else, our demo left us wanting more time with the unit to listen to more high-res audio tracks (Paul Simon songs tend to really stick in your head). While I might not be ready to delete all of my MP3s just yet, the benefits of lossless audio tracks and wireless players are clear, making devices like this a potentially essential component for future home theater setups.

For now, what do you think about Sharp's High Resolution Audio Player? Do you think the benefits of lossless audio and wireless playback justify the price tag? Does this look like a tempting option for your latest home theater upgrade? Or are you content with MP3s and cables? Let us know your thoughts in the forum!