The hit Transformers prequel will roll onto both formats in April.

Paramount says Bumblebee will be available on 4K Ultra HD Blu-ray and Blu-ray on April 2.  UPDATE: Own it early on Digital on March 19!

Cybertron has fallen. When Optimus Prime sends Bumblebee to defend Earth, his journey to become a hero begins. Charlie Watson (Hailee Steinfeld), a teenager trying to find her place in the world, discovers and repairs the battle-scarred robot, who’s disguised as a Volkswagen Beetle. As the Decepticons hunt down the surviving Autobots with the help of a secret agency led by Agent Burns (John Cena), Bumblebee and Charlie team up to protect the world.

Boasting an impressive 93% Fresh rating on Rotten Tomatoes, Bumblebee is filled with “personality, wit [and] imagination” (David Fear, Rolling Stone). The Digital*, 4K Ultra HD, and Blu-ray releases are packed with over an hour of exciting special features, including an all-new Bumblebee motion comic (including a printed version) following the beloved Autobot on his next adventure. Plus, check out deleted and extended scenes you didn’t see in theaters, including the original opening of the movie, enjoy hilarious outtakes, and see G1 (Generation 1) Transformers robots on Cybertron through the eyes of Bumblebee with exciting Bee Vision.

Bumblebee will also be available as part of a Bumblebee & Transformers 6-Movie Blu-ray Collection arriving on April 2.

You can find the latest specs for Bumblebee linked from our 4K and Blu-ray Release Schedules, where it is indexed under April 2. 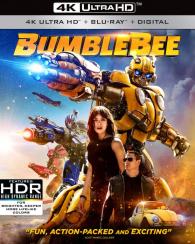 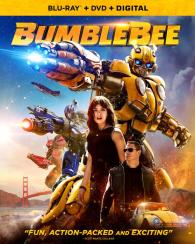