Starring Hailee Steinfeld and John Cena, Bumblebee is the best of the Transformers series, with plenty of heart, humor, and spectacle. The battle for Earth rages on Ultra HD with a gorgeous, near-reference Dolby Vision HDR and Dolby Atmos presentation, but a small assortment of supplements. Nevertheless, the UHD package is the Recommended and preferred way thrill ride for the whole family. (We have also reviewed the Blu-ray HERE.)

As the sixth installment in Michael Bay's ridiculously popular Transformers franchise, Bumblebee is easily the best in the sci-fi action series. Directed by Laika-alumni Travis Knight, who made an impression in his directorial debut of Kubo and the Two Strings, Knight brings a spellbinding enchantment anchored by a poignant center, smartly converging on the close friendship between the two protagonists. Of course, we're also here for the vehicular mayhem and the endless display of fuel-injected, supercharged robot battles, of which there is plenty. But at its heart, this is a story about a pair of loners finding each other.

Working from a script by Christina Hodson, Knight takes audiences on an adventure tale reminiscent of a Steven Spielberg production, drawing inspiration most notably from E.T.: The Extra-Terrestrial. Taking a note from the original 1980s animated program, the plot wastes little time in having the voiceless titular hero befriend benevolent human teen Charlie Watson (Hailee Steinfeld), replacing the Spike Witwicky character from the cartoons. Only, here, Charlie is still mourning the loss of her father — Spike's dad joined in many of the Transformers adventures — struggling with the grief alone in a family that seems to have moved on. Her younger brother Otis (Jason Drucker) appears unaffected while her mother (Pamela Adlon) and new boyfriend (Stephen Schneider) share quality time watching ALF without her. For sentient robot Bumblebee, he is literally alone with little memory of his past, spending much of his time like a frightened but inquisitive boy. 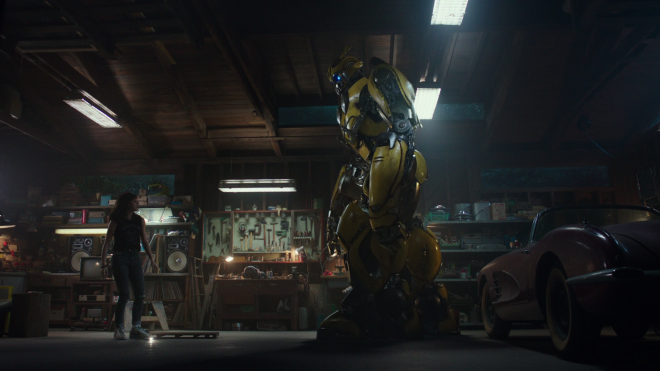 Predictably, the two help one another find their place in this chaotic world — Charlie eventually moves past her bereavement while Bumblebee almost literally calls home. But as the expression loosely goes, it's not about the destination as much as the journey, and the movie delivers on that with a great sense of humor, pacing and dramatic turns that avoid hazardously mawkish conditions. Everyone has their chance at steering the comedy without the eye-rolling absurdities seeing in the previous films, from the Watsons and Ron driving recklessly and Bee's childlike innocence when egging a bully's house to Memo (Jorge Lendeborg Jr.) awkwardly hiding his crush for Charlie. Even John Cena, as Sector 7 agent Jack Burns, is allowed to display his comedic chops while also doing his best as the determined soldier from a mysterious government agency, à la "Keys" from E.T. And the 80s cultural references add to the humor without feeling like a distracting trivia game.

In all honesty, much was riding against Bumblebee — very low expectations and cynicism largely tarnished by years of enduring the headache-inducing, ear-piercing badness of previous Transformers movies. Thankfully, Knight and his team demonstrate there still remains some spark in the engine, that there are just enough salvageable parts to rebuild a standalone vehicle with plenty of muscle under the hood. Working with cinematographer Enrique Chediak and editor Paul Rubell, Knight's camerawork is exactly the sort of fuel the franchise needed where the grinding metal on metal action is always intelligible and there's always a sense of space and scope as the Cybertronians duke it out. With excitedly fun and spectacular visuals complementing the story, Bumblebee feels like an episode to a larger whole without ever also feeling episodic.

Paramount Home Entertainment brings Bumblebee to 4K Ultra HD Blu-ray as a two-disc combo pack with a Digital Copy, which can be redeemed via ParamountMovies.com, allowing owners to watch a 1080p HD copy with Dolby Digital Audio. However, iTunes and Vudu users should be able to unlock 4K Dolby Vision streaming rights with Dolby Atmos audio. The dual-layered UHD66 and Region-Free BD50 discs sit on opposing panels of a black, eco-vortex case with a sleek, lightly-embossed slipcover. The package also includes a glossy, twelve-page color comic entitled "Sector 7 Adventures: The Battle at Half Dome." At startup, viewers are taken directly to a static screen with the usual selection along the bottom and music playing in the background.

Our little yellow heroic Bug puts up an excellent fight on Ultra HD in a tricked-out, souped-up HEVC H.265 encode, boasting several welcomed, stylish enhancements over the Blu-ray model, making it the better way for enjoying this high-octane ride.

Shot on the Arri Alexa camera system capable of up to 3.4K resolution but later mastered to a 2K digital intermediate, the end result isn't all that much sharper than the HD version. However, the upscaled transfer rolls fresh off the digital assembly line with cleaner and better-defined lines along the vehicles, exposing the tiniest rust spot, rivet, and flaw in the interior of the Bug. While the stitching in the clothes, individual moving metallic parts and small bits of debris are distinct, the 2160p picture comes with a few softer moments, and there are several instances of mild aliasing along the sharpest edges of some vehicles and buildings.

Nevertheless, this 4K vehicle takes to the road with other notable modifications and enhancements, thanks to the boosted contrast revving the supercharged engine under the hood. Granted, the UHD video is not significantly brighter, but it's a tad more vibrant and generally feels more spirited. The more appreciable aspects are the crisper whites delivering a more intensely, resplendent gleam in the light fixtures, car headlights and computer monitors. Also, specular highlights come with a stunningly tight and narrow glow, giving explosions a dramatic pop and metallic edges a sparkling shimmer while revealing better details within the hottest, brightest areas, such as the inside of Bumblebee's eyes. At the same time, black levels are noticeably richer with a velvety luster in the cars and shadows. Delineation is also nicely improved within the deepest, darkest corners of poorly-lit interiors, providing the 1.85:1 image with dimensionality and a beautiful cinematic quality.

Best of all, Enrique Chediak's stylized cinematography benefits most from the upgrade, offering several demo-worthy moments due to the overall improvement in color gamut. Almost immediately during the civil war prologue on Cybertron, the Dolby Vision HDR presentation comes alive with a lavish, flamboyant array of secondary hues, from the crimson scarlets and electrifying cobalt admirals sparkling the screen to the eye-catching mix of marigolds, deep fiery oranges and golden amber honeys in the explosions. More dramatic are the richer, fuller yellows in Bumblebee, the vibrant chartreuse greens of the tower in the climactic battle and the subtle fuchsia pinks of the hologram screens. Facial complexions come with lifelike textures and a nice rosiness in the realistic, accurately rendered flesh tones, revealing negligible blemishes, pores, and the tiniest wrinkles. Overall, it's an impressive, mesmerizing display, making this the preferred way to enjoy the movie. (Video Rating: 92/100)

Bumblebee comes revving and roaring into home theaters with an outstanding Dolby Atmos soundtrack that seems to fall perfectly in line with other Transformers titles.

Much of the attention is spread across the on-screen action with various effects heavily employing the surrounds in the fight to protect Earth, creating an awesome enveloping environ. The chaos and commotion of robotic brawls are littered with metal gears and steel parts seamlessly landing all around the listening area. On several occasions, the debris lightly flies through the overheads or the rumble of Decepticon jet engines screech from above and into view. During quieter sequences, the heights are relatively silent while the other channels do more of the heavy lifting, filling the room with subtle atmospherics and maintaining a generally satisfying soundfield, but when things kick into high gear, listeners are in the middle of battle.

Ultimately, the real win here is the totally tubular selection of 80s tunes and Dario Marianelli's score, taking full advantage of the extra breathing room and filling the entire soundstage with exceptional clarity and fidelity. Imaging regularly feels broad and spacious with lots of background activity traveling into the top heights, across the front channels and convincingly into the off-screen space while the mid-range exhibits superb distinction and room-penetrating warmth. Amid the heavy metal chaos and robotic mayhem, the dialogue remains precise and pristine while best of all is hearing the voices of Cybertronians echoing from above, creating a sense of scale and scope. The object-based track also comes with a thunderously authoritative low-end that provides the action with wall-rattling, couch-shaking, chest-thumping bass, sure to give the subwoofer a healthy workout. There are also a couple of moments that reach deep into the ultra-low depths, energizing the room with a palpable presence (bass chart). (Audio Rating: 90/100)

All of the special features are contained in the accompanying Blu-ray disc.

With engines roaring, guns blazing and a tank full of comedic fun, Bumblebee runs circles around the entire Transformers franchise, making it the best of the series with plenty of heart, humor, and spectacle. Anchored by a simple story about a pair of loners rescuing each other while saving the world, director Travis Knight brings back that sense of astonishment and amazement in seeing giant robots blow up stuff real good. The battle rages on Ultra HD with a fantastically gorgeous Dolby Vision HDR presentation that leaves its Blu-ray counterpart in the dust as well as an outstanding Dolby Atmos soundtrack. Equipped with a small but nonetheless enjoyable set of supplements, the overall UHD package is a recommended thrill ride for the whole family.

Sale Price 22.97
List Price 25.99
Buy Now
3rd Party 24.98
In Stock.
See what people are saying about this story or others
See Comments in Forum
Previous Next
Pre-Orders
Tomorrow's latest releases