The queen will take the throne on Blu-ray in January.

In an early announcement to retailers, PBS is working on 'Victoria: The Complete First Season' for Blu-ray on January 31.

Victoria is the landmark account of the early years on the throne of one of Britain's greatest queens. Jenna Coleman (Doctor Who) plays Victoria, taking her first faltering steps from capricious, hormonal teenager to respected monarch. Central to the drama is the scandalous friendship between Victoria and her first prime minister Lord Melbourne (BAFTA nominated Rufus Sewell; The Man in the High Castle), and the romance with her cousin Prince Albert (Tom Hughes; The Game).

You can find the latest specs for 'Victoria: The Complete First Season' linked from our Blu-ray Release Schedule, where it is indexed under January 31. 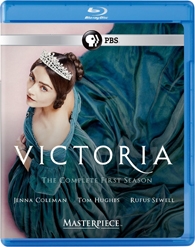 Discs mentioned in this article: (Click for specs and reviews)
Victoria: The Complete First Season (Blu-ray)