Two titles are coming to Blu-ray in May.

In an early announcement to retailers, Mill Creek Entertainment is preparing Spacehunter: Adventures in the Forbidden Zone and Payback Time: Triple Feature for Blu-ray in May.

Spacehunter: Adventures in the Forbidden Zone (May 2) - In the year 2136, Wolff (Peter Strauss), a wily salvage pilot and intergalactic bounty hunter, answers a distress signal on Terra Eleven. Agreeing to pick up three women who've been shipwrecked, he lands on the planet only to discover they've been kidnapped. Following their trail, Wolff soon encounters Niki (Molly Ringwald), a spunky orphan who agrees to guide him across the Forbidden Zone, a vast wasteland populated by plague-infested mutants. After many battles, Wolff and Niki finally reach the lair of Overdog (Michael Ironside), the planet's half-man/half-machine ruler. Discovering the women are held captive in Overdog's slave pens, Wolff's rescue mission finally begins. 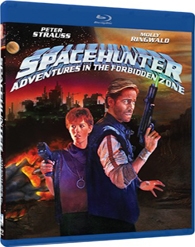 Blind Fury - He's lucky he can't see what he's up against. Blinded and left to die in Vietnam, Nick Parker returns to the States and uses his highly-tuned senses to help an old Army buddy in an action-packed cross-country battle.

White Line Fever - In the 1970s Arizona, a young married man becomes an independent long-haul driver and he risks his life fighting the corruption in the local long-haul trucking industry. 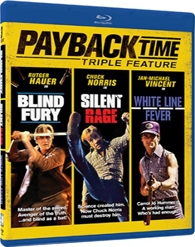 You can find the latest specs for all three titles listed above linked from our Blu-ray Release Schedule, where they are indexed throughout May.