The clip comes from an all-new documentary set to be included with the Ultra HD Blu-ray.

In anticipation for the August 25 theatrical 3D release and October 3 4K Ultra HD Blu-ray release of Terminator 2: Judgement Day, Lionsgate has posted a new special features clip from the upcoming disc. The segment is taken from the 55-minute "T2: Reprogramming The Terminator" documentary.

In the video, writer and director James Cameron, co-writer William Wisher, and star Arnold Schwarzenegger discuss turning the Terminator into the film's hero. Schwarzenegger elaborates on his first read of the script and his initial hesitance toward making the character a good guy before Cameron convinced him that he'd still be "seriously bad-ass." Check out the clip below!

The 4K Ultra HD Blu-ray release of Terminator 2: Judgement Day will be available on October 3. The disc will feature a brand new 4K restoration of the film supervised by director James Cameron (with some minor shot tweaks detailed here) and a DTS:X soundtrack. Supplements will include:

In addition, a Limited Collector's Edition with a life-sized Terminator EndoArm including a uniquely numbered sticker featuring the signature of writer-director James Cameron will also be available on October 3. 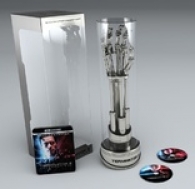