James Cameron's epic action, sci-fi masterpiece starring Schwarzenegger in his most iconic role, has been stunningly restored by Cameron himself. First hitting our screens in 1991 with ground-breaking special effects, this version will take the seminal blockbuster to the next level of effects and into the 21st century for a new generation of fans.

It has been 10 years since the events of Terminator. Sarah Connor's ordeal is only just beginning as she struggles to protect her son John, the future leader of the human resistance against the machines, from a new Terminator, sent back in time to eliminate John Connor while he's still a child.

Sarah and John don't have to face this terrifying threat alone however. The human resistance have managed to send them an ally, a warrior from the future ordered to protect John Connor at any cost.

The battle for tomorrow has begun…

What more could be said of what is widely hailed as one of the greatest action movies of all time and almost universally considered the best sequel ever made? In the decades since it originally premiered in 1991, James Cameron's classic sci-fi actioner Terminator 2: Judgment Day has seeped itself into our cultural pantheon and the collective unconscious. Even if the unacquainted had never seen this masterfully entertaining film, young moviegoers have heard of it and are somehow familiar with its time-traveling plot. Some also know it stars action-legend Arnold Schwarzenegger as the titular killing machine sent from the future to protect a boy (Edward Furlong) destined to be someone of great importance. And, along with Steven Spielberg's Jurassic Park, it should also always be remembered as marking the beginning of the groundbreaking years in computer-generated imagery, heralding what would soon become a common practice in visual special effects and photography. After twenty-five years, it's surprising to see much of the work done back then remains as striking and fascinating as when I first experienced them in cinemas. 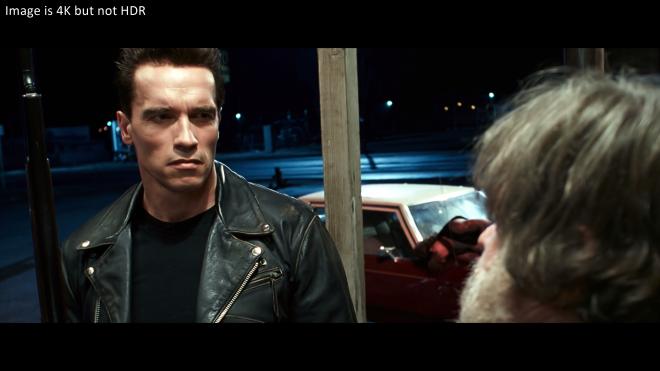 Lionsgate Home Entertainment brings Terminator 2: Judgment Day to 4K Ultra HD Blu-ray as a two-disc combo pack with a flyer for a Digital HD Copy, which can be redeemed via movieredeem.com or through VUDU but only the Theatrical Cut is available in HD SDR and HDX. The dual-layered UHD66 disc sits comfortably opposite a Region A locked, BD50 disc inside a black, eco-vortex case with a glossy slipcover. At startup, the disc goes straight to an interactive menu screen with full-motion clips and music playing in the background.

The dearly beloved action sci-fi sequel finally lands on Ultra HD in the U.S. with the identical HEVC H.265 encode seen in the European release by Studio Canal. Literally, this is the exact same copy with an identical menu screen and the same white-text screen at the start informing viewers that the French-based studio conducted the 3D remaster. And since James Cameron reportedly supervised and approved this new 4K digital intermediate, this means fans must endure the same overzealous tinkering and digital manipulation. As mentioned in my review of the U.K. import, the DNR may not be Predator levels of atrocity, but it is nonetheless bad and disheartening for an action classic, and there are also several instances of aliasing and moiré effects along the sharpest edges and in light fixtures.

For those more forgiving, the 2160p video delivers a decidedly step up over its most recent Blu-ray counterpart. Ignoring a few softer, poorly-resolved moments related to the original photography, viewers can better make out the tiniest stitch and wrinkle in Schwarzenegger's leather jacket while individual hairs in the T-1000's perfectly combed haircut are always distinct. When the blatant use of DNR is not an issue, facial complexions appear natural with lifelike textures, exposing the most trifling blemish and pore. While it may not be one of the stronger HDR presentations, overall contrast shows some appreciable improvement with brighter, cleaner whites, but there are also a few spots of blooming ruining the finer details. Specular highlights, however, are tighter, providing a realistic glow on metal objects and light fixtures. The bigger upgrade is the brightness levels, delivering rich, midnight blacks, providing the 2.40:1 image with a welcomed cinematic touch and exceptional shadow detail. Colors also benefit somewhat, with primaries, at times, looking well-saturated and natural while at others, seeming dull and plain. Secondary hues fare a bit better and with more variation in the palette, providing some extraordinary detailing within the orange flames of explosions, but skin tones often appear flushed and pale, as though completely drained of color.

Despite these few positives sprinkled throughout, a majority of the 4K presentation lacks warmth and often feels flat. And this is related to the original color timing having been changed to a steelier blue and the ever-popular orange-teal ugliness. Cameron made a similar change to Aliens, but it doesn't feel nearly as dramatic and unattractive as seen here. All in all, I imagine purists and cinephiles will find this video presentation a travesty while the more forgiving fans will enjoy and possibly even applaud the results.

For a more in-depth take on the 4K presentation and for comparison, you can read our review of the Ultra HD import HERE.

The same remastered lossless audio options enjoyed on the European release are also offered on this 4K Ultra HD disc — a pair of highly enjoyable and satisfying DTS-HD Master Audio 5.1 soundtracks, one in the original English while the other in French, and a third German DTS-HD 7.1 track.

For a more in-depth take on the audio quality, you can read our review of the U.K. import HERE.

All the same bonus material has been ported over and can be enjoyed on the accompanying Blu-ray disc, which also features the Theatrical, Special Edition and Extended Special Edition versions of the movie via seamless branching. For more details, read our review HERE.

James Cameron's classic sci-fi actioner Terminator 2: Judgment Day is widely hailed as one of the greatest action movies of all time and universally considered one of the best sequels ever made. Added to that, the film's legacy and lasting impact marks the beginning of the groundbreaking years in computer-generated imagery, heralding what would soon become a common practice in visual special effects and photography.

Arriving stateside, the Ultra HD Blu-ray fights for the future with the same somewhat average but ultimately disappointing 4K presentation seen in the European release courtesy of Studio Canal, offering only a minor improvement over its Blu-ray counterpart. The same set of DTS-HD MA lossless mixes are also ported over and don't really sound that much different than what's already been heard on previous home video editions. The same set of supplements, including a brand-new retrospective, are joined by a standard Blu-ray SDR copy that's exclusive to the UHD. In spite of the small disappointments, the overall package is highly tempting for loyal fans of the action classic and those willing to forgive the HDR transfer's shortcomings.