What more could be said of what is widely hailed as one of the greatest action movies of all time and almost universally considered one of the best sequels ever made? In the decades since it originally premiered in 1991, James Cameron's classic sci-fi actioner Terminator 2: Judgment Day has seeped itself into our cultural pantheon and the collective unconscious. Even if the unacquainted had never seen this masterfully entertaining film, young moviegoers have heard of it and are somehow familiar with its time-traveling plot. Some also know it stars action-legend Arnold Schwarzenegger as the titular killing machine sent from the future to protect a boy (Edward Furlong) destined to be someone of great importance. And, along with Steven Spielberg's Jurassic Park, it should also always be remembered as marking the beginning of the groundbreaking years in computer-generated imagery, heralding what would soon become a common practice in visual special effects and photography. After twenty-five years, it's surprising to see much of the work done back then remains as striking and fascinating as when I first experienced them in cinemas.

For a more in-depth take on the movie, you can read Matthew Hartman's review of the Blu-ray SDR HERE. 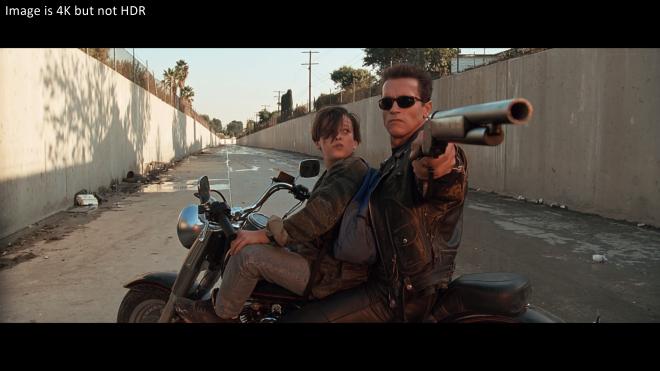 In the United Kingdom, Studio Canal brings Terminator 2: Judgment Day to 4K Ultra HD Blu-ray as a two-disc combo pack. The dual-layered UHD66 disc sits comfortably opposite a Region B locked, BD50 disc inside a black, slightly thicker than normal keepcase with a glossy slipcover. At startup, the disc goes straight to an animated menu screen with music playing in the background.

The North American release of the Terminator 2 – 4K Ultra HD is on December 26th, and you can pre-order that version HERE.

The dearly beloved action sci-fi sequel tries to make its own fate on Ultra HD with a somewhat disappointing yet watchable HEVC H.265 encode. Reportedly, the original camera negatives received a brand-new 4K restoration supervised by James Cameron himself but remastered for 3D, which was shown theatrically in select theaters this last summer.

For all intents and purposes, we can assume this transfer was struck from that new 4K digital intermediate, but the results are a bit of a mixed bag because some of those restoration efforts appear to be aftermath of some overzealous tinkering and digital manipulation. Most egregious is clear evidence of noise reduction being applied, sometimes very light and forgivable while at other times, excessive and horridly distracting. In a few areas, faces are noticeable smooth, such as when a naked T-800 walks into the dive bar and later snags the shotgun before stealing the Harley. One of the worst moments is the therapy session between Sarah and Dr. Silberman where the unsightly face of the psychiatrist not only makes him looks like a wax figurine but also like the unfortunate result of a Botox experiment gone wrong. The DNR may not be Predator levels of atrocity, but it is nonetheless bad and disheartening for an action classic. Then, there are also several instances of aliasing and moiré effects along the sharpest edges and in light fixtures.

On the whole, the 2160p video provides a step up over its most recent Blu-ray counterpart, though it's not by a significant margin. Of course, there are a few softer, poorly-resolved moments sprinkled throughout, many of which are seen during low-lit interiors and very likely related to the original photography. Nevertheless, viewers can better make out the tiniest stitch and wrinkle in Schwarzenegger's leather jacket while individual hairs in the T-1000's perfectly combed haircut are always distinct, and the smallest trinket, object and piece of furniture in the Cyberdyne office is plainly visible. When the blatant use of DNR is not an issue, facial complexions appear natural with lifelike textures, exposing the most trifling blemish and pore. It's also worth noting that some of the CG effects and rear-projection photography is made even more apparent and hasn't aged particularly well. This doesn't affect the score, but it merits mentioning.

However, this is not one of the strongest HDR presentations deserving of one of the greatest action movies ever made, which again is disappointing. In fact, overall contrast is relatively average with a few scattered peaks of luminance, making much of the transfer look grayish, somewhat bland and generally two-dimensional. Granted, whites are a tad brighter and cleaner than before, but it also comes with many hot spots throughout, introducing a bit of blooming to ruin the finer details, while a few exterior shots seem to run so hot viewers may not note mild ringing around several objects. Specular highlights occasionally show an improvement, such as within car headlights and the realistic gleam on the side of cars, but these moments are far and few in between. The bigger, more appreciable upgrade are the brightness levels, delivering luxuriantly rich, midnight blacks, providing the 2.40:1 image with a welcomed cinematic touch and some depth in a few sporadic sequences. Shadow detailing is exceptional, which comes in handy during the climactic fight sequence in the steel mill.

Falling somewhere in between the contrast and brightness, colors benefit somewhat from the jump to Ultra HD, at times looking well-saturated and natural while at others, seeming dull and plain. Of the primaries, blues and greens are richer and more energetic, especially in the bolts of electricity flying everywhere early on and later during the robot one-on-one combat. Reds, for the most part, are fuller and deeper, but not quite as vibrant, and on many occasions, the faces of the cast appear flushed and pale, as though completely drained of color, such as the conversation scene between our would-be heroes and the Dyson family. Secondary hues fare a bit better and with more variation in the palette, providing some extraordinary detailing within the orange flames of explosions and in the fiery yellow glow of molten metal.

Despite these few positives sprinkled throughout, a majority of the 4K presentation lacks warmth and often feels flat. And this might be related to the fact the original color timing has also been changed to a more steely blue and the ever popular orange-teal ugliness. Cameron made a similar change to Aliens, but it is nowhere nearly as egregious and unattractive as seen this Ultra HD of Terminator 2. All in all, I imagine purists and cinephiles will find this video presentation a travesty while the more tolerant and forgiving fans will enjoy and possibly even applaud the results.

Along with the video, it would seem the original sound has also been remastered using the same elements to create a highly enjoyable and satisfying DTS-HD Master Audio 5.1 soundtrack. (Owners of the UK import are also given a German DTS-HD 7.1 track.) Although the movie has been released in the past with various surround sound options, the design has never been a powerhouse in home audio or overwhelmingly impressive. And by being made available in a 5.1 configuration, this track should be a littler closer to the original Dolby SR and Cinema Digital Sound (CDS) recordings heard in cinemas during its initial theatrical run.

The occasional sound effect discretely pans between the channels with amusing effectiveness, such as the police helicopter circling the Cyberdyne building. Quieter, dialogue-driven moments are, well, quiet, except for some mild atmospherics that nicely expand the soundfield, such as the climactic fight inside the steel mill. And these few moments lend themselves terrifically when applying the receiver's DSU processing, allowing those same effects to effortlessly move into the overheads without feeling forced or strained.

The best and most engaging aspect of the lossless mix is the immensely spacious soundstage, filling the screen with far better clarity and balance among the three front channels. Background activity travels from one side of the screen to the other with incredible, convincing ease and light bleeding into the top heights. The mid-range is also a bit more dynamic with better warmth and richer fidelity where the listener can appreciate a crisp, clear distinction between the quietest moments and the sudden bursts of action. Conversations are well-prioritized and precise with better distinction, delivering every line and exchange with a deeper, more emotional impact. Low-frequency effects are not particularly noteworthy, but bass remains responsive and accurate, providing appreciable depth and weight to the action.

All the bonus material can be enjoyed on the accompanying Blu-ray disc, which also features the Theatrical, Special Edition and Extended Special Edition versions of the movie via seamless branching.

Audio Commentaries: Director James Cameron is joined by co-writer William Wysher for the first commentary track where the two talk passionately about the story and production. The second track was piecemealed together from various audio interviews of the cast & crew, sharing a variety of information on the technical aspects of the production and several anecdotes from the set.

Reprogramming (HD, 55 min): Brand-new documentary that is surprisingly candid, exhaustive and informative with recent cast & crew interviews reminiscing on the plot, production and the film's legacy.

Trailers (HD): A trio of theatrical previews are joined by the new T2: 3D trailer.

James Cameron's classic sci-fi actioner Terminator 2: Judgment Day is widely hailed as one of the greatest action movies of all time and universally considered one of the best sequel ever made. Added to that, the film's legacy and lasting impact marks the beginning of the groundbreaking years in computer-generated imagery, heralding what would soon become a common practice in visual special effects and photography.

The Ultra HD Blu-ray comes from the United Kingdom courtesy of Studio Canal with a somewhat average but ultimately disappointing 4K presentation, offering only a minor improvement over its Blu-ray counterpart A new DTS-HD MA 5.1 lossless mix doesn't really sound that much different than what's already been heard on previous home video editions, and a small set of the same supplements are ported over, joined by a brand-new retrospective. In spite of the few small disappointments, the overall package is highly tempting for hardened, loyal fans of the action classic and those willing to forgive the HDR transfer's shortcomings.

Sale Price 26.9
Buy Now
3rd Party 32.15
In Stock.
See what people are saying about this story or others
See Comments in Forum
Previous Next
Pre-Orders
Tomorrow's latest releases