The action-thriller will gun down Ultra HD Blu-ray in February.

In an early announcement to retailers, Lionsgate is preparing 'John Wick' for Ultra HD Blu-ray on Frebuary 7.

When sadistic young thugs senselessly attack John Wick (Keanu Reeves)—a brilliantly lethal ex-assassin—they have no idea they've messed with the wrong guy. With New York City as his bullet-riddled playground, Wick embarks on a merciless rampage, hunting down his adversaries with the skill and ruthlessness that made him an underworld legend.

The Ultra HD Blu-ray will feature 2160p video, a Dolby Atmos soundtrack, and supplements will include an Audio Commentary and Featurettes.

You can find the latest specs for 'John Wick' linked from our Ultra HD Blu-ray Release Schedule, where it's indexed under February 7. 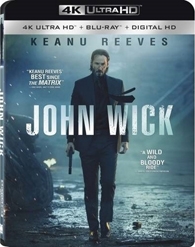