The action-adventure fantasy arrives in stores on multiple formats in May.

In an early announcement to retailers, Lionsgate will be releasing 'Gods of Egypt' on Blu-ray, Blu-ray 3D, and 4K Ultra HD Blu-ray on May 31.

In this spectacular action-adventure, the survival of mankind hangs in the balance as an unexpected mortal hero Bek (Brenton Thwaites) undertakes a thrilling journey to save the world and rescue his true love. In order to succeed, he must enlist the help of the powerful god Horus (Nikolaj Coster-Waldau) in an unlikely alliance against Set (Gerard Butler), the merciless god of darkness, who has usurped Egypt's throne, plunging the once peaceful and prosperous empire into chaos and conflict. As their breathtaking battle against Set and his henchmen takes them into the afterlife and across the heavens, both god and mortal must pass tests of courage and sacrifice if they hope to prevail in the epic final confrontation.

Each release will feature a DTS:X soundtrack and supplements include: Deleted Storyboards; A Divine Vision: Creating a Cinematic Action Fantasy; Of Gods and Mortals: The Cast; Transformation: Costume, Make-up & Hair; On Location: Shooting in Australia; The Battle for Eternity: Stunts; and A Window into Another World: Visual Effects.

You can find the latest specs for 'Gods of Egypt' linked from our Blu-ray Release Schedule, where it is indexed under May 31. 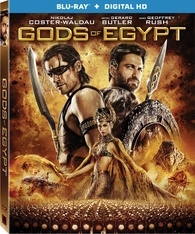 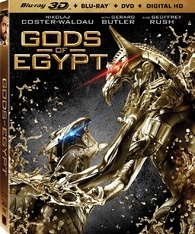 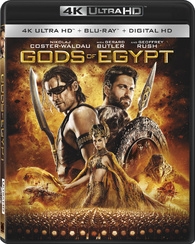